SRC Tribute: The Haggis and the Herring 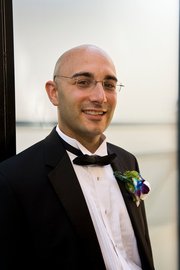 I didn't know Daniel Saraga in the real world. And I, actually, wasn't too familiar with his blog, The Haggis and the Herring. He was the herring. But when an announcement through the Secret Recipe Club came out that we had lost one of our members, I was reduced to tears. Photo to the left is from his blog.

Not just a small amount of moisture from the corners of my eyes. Streaming tears of grief and sympathy as I read the tribute to Daniel that his wife, Meredith, posted on the Monday after his funeral. She wrote so poignantly about the hole - the hole in her heart that losing him has left. I cried for the what-could-have-been for her family and for their unborn J3 who will never know Daniel.

For being under 40-years-old, I have already had too many close friends lose their spouses. One of my best friends was on Flight 77 that crashed into the Pentagon on September 11th. I wrote this tribute to Zanne on the ten-year anniversary of that horrible day. And the friend who played the Dave Matthews song, on his guitar, to which I walked down the aisle when I married Jake passed away about five years ago, leaving his wife, a young son, and a newborn son. Both of my friends have mourned and moved forward in their lives, but I am certain that those holes in their hearts will never be completely healed. Time, however, seems an effective salve that washes away the memories of arguments, annoyances, and hassles of everyday life. What remains is the warmth of why you fell in love in the first place and all the reasons you swore "till death do you part."

As a tribute to Daniel, the group has decided to...cook. Fitting, I think. So, those who wish are cooking, posting, and sharing a recipe of Daniel's on a particular day. And today is the day.

I opted to make Daniel's Sababa Lentil Soup for dinner on a Friday evening when we all we had on the agenda was family cuddles and lots of giggles. My boys were rallying for the Dr. Pepper Meatballs. Another time, perhaps. And for our shared love of pub-crawling in Alaska - we missed the one in Skagway, but did relax at the Red Dog in Juneau - my husband and I lifted a pint in Daniel's honor as well. The blogosphere - and the world - has lost a talent. Cheers! 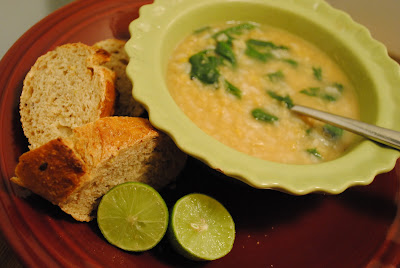 I made a more rustic version of the soup - not pureeing per his recommendation - with a few more spices and a couple handfuls of fresh spinach tossed in at the last minute. My family requires greens in their soup. Weird, I know. But, from a nutritional standpoint, that makes me really happy. 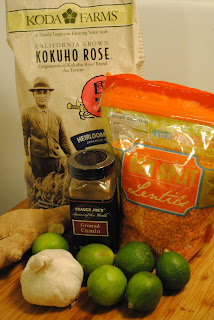 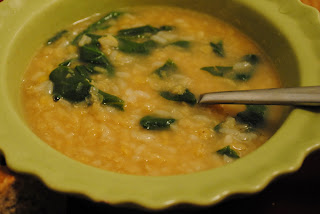 In a large pot, saute the garlic and ginger until they are softened. Add the lentils, rice, broth, and water. Bring to a boil. Reduce to a simmer. Simmer uncovered for 15 minutes. Season to taste, then simmer for another 10 minutes. Turn off the heat. Stir in the spinach and let wilt. Serve with halved limes and a hearty multi-grain bread. 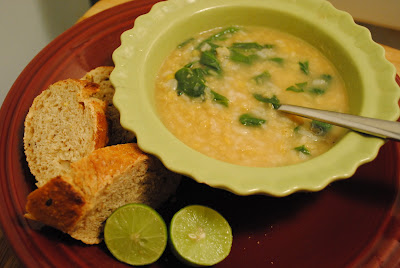