By Camilla M. Mann October 05, 2012
Back in April we went to the inaugural Independent Marketplace. Tonight, while Jake worked on his math homework, I whisked the boys over the West End to see what autumn treats the vendors had in store for us. 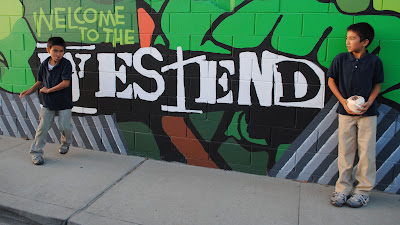 If you've never been and you live in the tri-counties area, what's stopping you? Seriously. Picture local producers peddling their freshest, seasonal harvest - voluptuous dry-farm tomatoes from Live Earth Farm, gorgeous amethyst tipped edible thistles from Pezzini Farms, and petite, luscious oysters on a glistening bed of ice from Local Catch Monterey. Since my fridge is full with CSA goodies and I am, tragically, allergic to oysters, we focused on grabbing an al fresco dinner, exploring the artisan foodsmiths, and celebrating the bounty of our local foodshed. 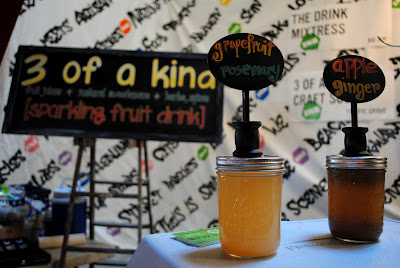 Some new-to-me foodsmiths: 3 of a Kind. I knew that they would be pouring some of the non-alcoholic libations at Edible Monterey Bay's 1st birthday party, so I went over to introduce myself...and taste some of her drinks. Who am I kidding? I tasted them all!


3 of a Kind was created by a local mom - of triplet boys - who wanted to make a fresh, handmade sparkling drink that everyone could enjoy. She says that "it's the drink for people that don't drink soda." Her creations have no preservatives, no artificial colors, and no artificial flavors; they contain only three ingredients: fruit juice + natural sweeteners + herbs and spices. Cheers! 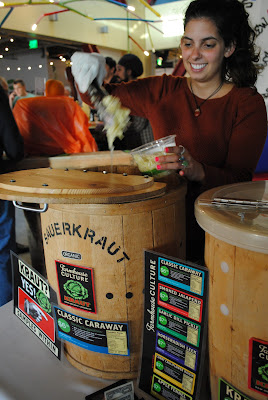 Farmhouse Culture. Raw organic goodness - that's their tag line. And it is true. I've seen their wooden barrels and been intrigued. But, I don't like standing in lines, so I've skipped their table a few times. As luck would have it, there were no lines. So while the boys noshed on their dinner, I ducked over and tasted a few of their krauts and bought a container full of their classic caraway kraut.

Founder Kathryn Lukas admits, readily, that she’s obsessed with kraut. Her interest was piqued in Germany, where she was the chef-owner of a popular neighborhood restaurant in Stuttgart for several years.

Back in the States, living in Groveland and Santa Cruz, Lukas found herself inspired by the bounty of the surrounding landscapes, longing to create a sustainable, hands-on business. During a writing sabbatical in the Sierra Nevada Foothills, Lukas recalled the delicious krauts she’d adored in Germany and began digging into kraut lore, legend, and history. Farmhouse Culture was born. 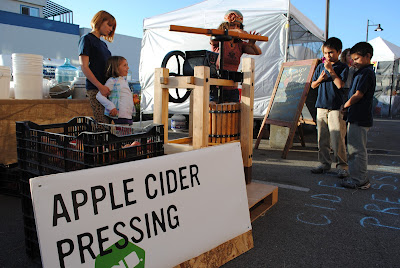 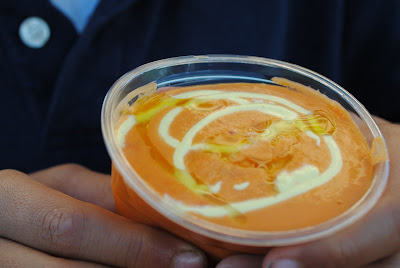 Then we were hungry. We perused the offerings and Dylan honed in on the chilled heirloom tomato gazpacho from Mundaka, a Spanish style tapas restaurant in downtown Carmel. I've always wanted to go there for a date night with my love. Instead, I shared a cup full of soup with my (mini) love. Dylan said, "Mom, there are swirls of something creamy and something tangy. It's delicious!" I concur. Now I'm really going to have to make it over there with Jake! 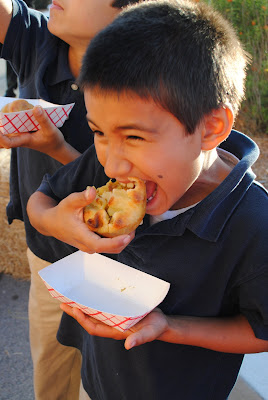 The soup was just a teaser. We went for savory hand-pies from the Back Porch. Austin Kaye, the owner of Back Porch, opened in May of this year. Austin was a sushi chef at Zenbu in San Diego, then he opened and managed Masu, a thriving sushi restaurant in Portland. While in Portland, Austin worked in several high-end establishments specializing in the local cuisine, was a mushroom forager, worked at a local vineyard and winery, and also cooked in a restaurant that served exclusively organic and vegan dishes. Since moving to Santa Cruz in 2009, he has become well-versed in butchering and the various mediums of meat cooking.

We devoured their pulled pork pies with apple barbeque sauce and their veggie curry pies. And we ran into a friend who observed, "You are so lucky. Your boys eat anything." That is true. A picky eater wouldn't survive long in my house. 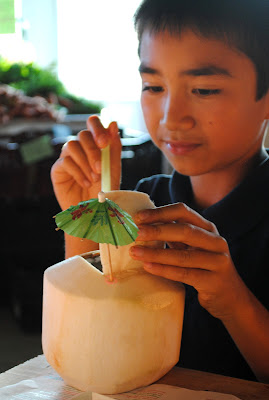 And, though it was neither local nor organic, we washed it all down with whole coconuts...with little umbrellas. The umbrellas were the clincher.

Other favorites from the evening included Serendipity Saucy Spread, Jams, and Preserves. The things that Kristen and Lynette Cederquist make have been family favorites since we first discovered them. And, though we make our own jams most of the time, theirs are a treat. We picked up fresh lemon curd, blackberry preserves, and Santa Rosa plum jam. As a bonus, they gave us some wildflower honey-sea salt caramels. Thanks, gals! Yum.

And as we were headed out the door, Dylan saw the table for Garden Variety Cheese. And he dashed over there and asked for some samples. The gal handing out the samples looked at me and stated, "This is a little bit barnyard-y. Do you think he'll like it?" Dylan interrupted, "I've been to the Monkeyflower Ranch and I love all of those cheeses!" So, she handed it over and my mini-caseophile made his way through all of her offerings before settling on a wedge of their Hollyhock. And I selected some of their lamb sausages.
Well, that's a wrap on another successful adventure at the Independent Marketplace. We'll be back next month. First Thursday. Join us!