A Pair of Pumpkins Baby Shower 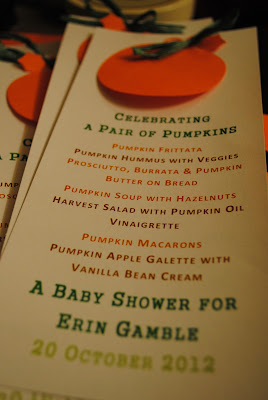 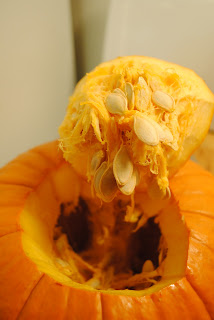 When two friends and I decided to host a baby shower for another friend who is having twins, we divided up the tasks and the menu, and cooking, came to me. Woohoo! I got to create an entire lunch based on my favorite squash: the pumpkin. And since the shower was yesterday, I don't have to stay mum on the menu or the recipes. Get ready for some pumpkin madness...

First up: prepare the pumpkins. I slaughtered a lot of pumpkins for this party. And I mean a lot! I think the final score was Camilla, 7. Pumpkins, 0.

I made pumpkin puree with three pumpkins. I used the puree to make vanilla bean- pumpkin butter that appeared in the first and third courses and to make the soup. 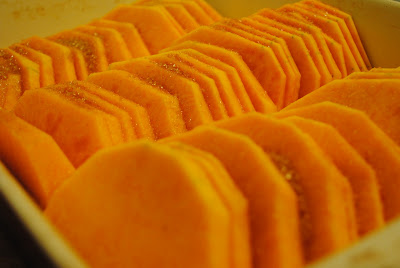 Preheat the oven to 350 degrees. Peel and slice the pumpkins. Then line them up in your roasting pans. For savory, sprinkle the pumpkin with sea salt; for sweet, use raw turbinado sugar. Drizzle them with olive oil. And roast until softened but still holding their shape. Mine took about 70 minutes.

I cleaned out one large pumpkin and used it as a soup terrine.

And, the last of the pumpkin sacrifices, when to the centerpiece. I put on my (former) florist hat and did a flower arrangement inside a cinderella pumpkin with maple leaves, sunflowers, autumn-hued mums, two kinds of eucalyptus, and a protea. 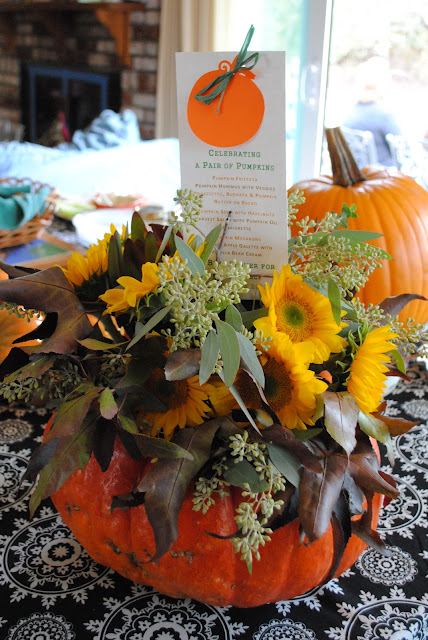 And here's the crew, celebrating Erin at her Pair of Pumpkins baby shower. I climbed up on a jungle gym in high heels to take this shot! ;) I can only hope that the ladies enjoyed eating the lunch as much as I enjoyed cooking it. Can't wait to meet the Gamble twins! 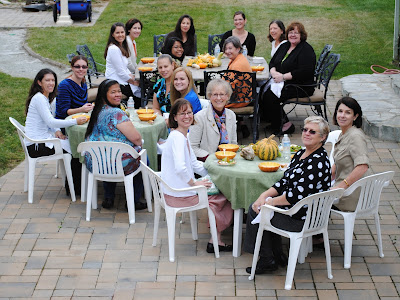