By Camilla M. Mann October 15, 2012
A few years ago one of my best friends gave me a candy thermometer for Christmas. Seriously, that was one of my favorite presents ever. Ever! And while it's not totally necessary - I've made candies without it - it does make life so much easier. And, regarding the "flop" in the post title, keep reading. Though I used my handy-dandy thermometer correctly, I did not cook to the correct temperature for the ingredients that I used. 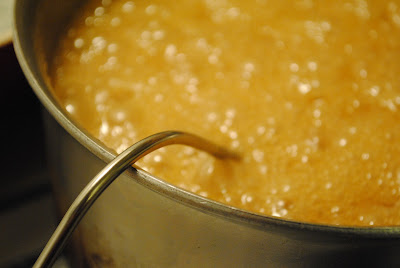 The gals at Serendipity Saucy Spreads gave me a wild honey caramel last week when we stopped by their table at the Independent Marketplace's Harvest Festival. I've been dreaming about making caramels since.

Then I found a recipe in Shauna Sever's Pure Vanilla and I thought it was a done deal. 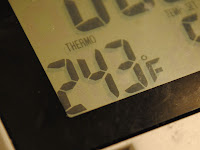 Line a 9"x13" pan with foil and rub it with oil. In a medium saucepan, combine the cream and vanilla bean. Heat until the mixture begins to bubble around the edges of the pan, but make sure that it doesn't boil or scald. Remove from heat and let steep for 20 minutes.

Remove the pod and scrape the vanilla caviar into the cream. Add all of the other ingredients, except, for the salt and bring to a boil over medium heat. Drape the candy thermometer into the pot, reduce the heat, and simmer until the temperature reaches 243 degrees F.

Pour the mixture into the prepared pan and let cool until very firm - overnight if possible.

What I didn't read, until too late, was that when you swap agave for corn syrup you have to cook to a higher temperature. "Cook the caramel until it reaches 248 degrees F." Other recipes list the temperature at anywhere from 243 to 350. Huh? I guess I'll have to experiment, but I'm thinking closer to 250 would be better. So, it was on to plan B for these sweets. 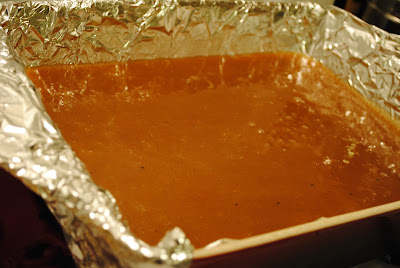 Plan A (Original Intent): Turn the slab onto a parchment covered cutting board and cut into bite-sized pieces. Wrap in individual pieces of parchment paper.

Plan B (Modification One): Cut into bite-sized piece and place in the freezer for at least 30 minutes. In the meantime, melt dark chocolate in the top of a double boiler (or in a stainless steel bowl over simmering water). Dip. Well, these totally flopped, too! Tasted delicious, but were all wrong, texture-wise. Those pesky 5 degrees - or more - would make a huge difference.

Plan C (Hail Mary Modification): Keep in the freezer until ready to eat. This is not quite as glamorous as I had hoped, but it's my flop-fix for now. Of course, I'll make a redemption batch to soothe my battered ego later this weekend.