Cooking Around the World: Japan 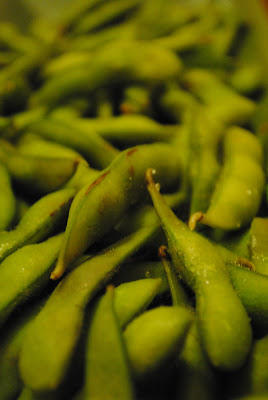 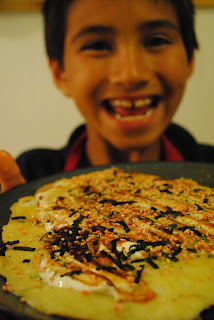 I almost wasn't sure we needed to cook for Japan on our cooking around the world adventure. I mean, that's our usual escapist meal. When we don't want to cook, sushi, teriyaki, and udon are at the top of our list. So I decided that instead of trying to replicate our favorite eat-out-dinner, we would make something completely different. I had a whole head of cabbage in the fridge; we decided on okonomiyaki for the main course. 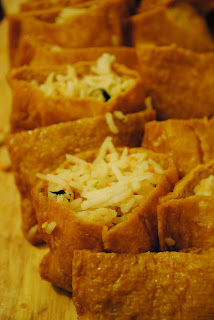 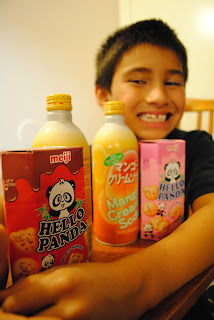 We started with inarizushi and steamed edamame. And I let the boys get some package treats for dessert.

Fun facts about Japan that the boys found interesting:

Raw horse meat is a popular food in Japan.

A musk melon, similar to a cantaloupe, may sell for over $300.

Sumo wrestlers eat a stew called Chankonabe to fatten up.

Noodles, especially soba (buckwheat), are slurped loudly when eaten. Slurping symbolizes the food is delicious, but the slurping also serves to cool down the hot noodles for eating.

Tsukiji market in Tokyo is the world's largest fish market.

Japan still hunts whales under the premise of research and the harvested whale meat, often, ends up in restaurants and supermarkets.
Ovens are not nearly as common as rice cookers in Japanese households.

Geisha means "person of the arts" and the first geisha were men.

It was customary in ancient Japan for women to blacken their teeth with dye as white teeth were considered ugly. This practice persisted until the late 1800's.

This Global Table Ambassador is signing off for now. We are wrapping up the Js with Jordan and will launch into the Ks next week. As the 10th month of the year draws to a close, I realize that we are definitely not going to make it through all 195+ countries in 2012 as I had, irrationally, hoped. So, our Cooking Around the World adventure will continue into 2013.