Cooking Around the World: Jamaica

By Camilla M. Mann October 25, 2012
It been a busy couple of weeks. And though I've been cooking, I haven't been blogging as much about the Cooking Around the World adventure as we have been eating. I'll try to catch up this week. 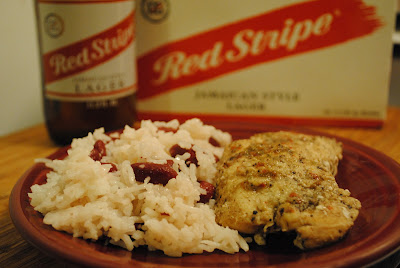 I've always wondered: What's ackee rice? What's an ackee?!? So, this was the chance for me to research that and think about making it. I mean, it's in the song, right?
Turns out that ackee is a member of the soapberry and related to the lychee and the longan. And, despite all my trips to obscure produce markets, I have never seen one. Scratch that off the list for possible Jamaican dishes.

What was definitely appearing on the table - for the tall Manns - was the Jamaican beer Red Stripe! I hadn't thought about Red Stripe until there was a story on NPR, as I was driving to the grocery store, about the James Bond connection to the Jamaican beer. Talk about serendipity...and inspiration. Apparently author Ian Fleming was a fan of the beer, keeping his fridge stocked at his Jamaican estate, Goldeneye. And the beer appeared in 007's first film in 1962, Dr. No. Bond enters Puss Feller's bar where there are several cases stacked behind the bar. During an altercation, Bond throws Puss into the stack of Red Stripe cases. Sold!
We decided to make Jamaican Rice and Peas, which actually doesn't have any peas in it at all, and Jamaican Jerk Chicken. So, in addition to answering my question of - what is an ackee? - I also answered: Why is it called 'jerk'?
Here's what I found on the etymology (from the kitchenproject.com): 'jerk' derives from the Peruvian word  'charqui', a word for dried strips of meat...like what we call jerky. But another food historian claims that it is called jerk because that's what people might do with errant bits of meat while it's on the spit; they might jerk off pieces to eat before the dish is served. I think I like the former versus the latter.
Jamaican Rice and PeasJamaican Rice and Peas = long-grain rice cooked in a mixture of coconut milk and chicken stock + cooked kidney beans. For added flavor, I cooked the rice with three whole shishido peppers that I removed before serving.
Jamaican Jerk Chicken
1/2 cup fig balsamic vinegar (the traditional recipe called for malt vinegar)
10 green onions, chopped
2 Tablespoons crushed garlic
2 Tablespoons dried thyme
2 shishido peppers, destemmed, deseeded, and chopped
2 Tablespoons olive oil
4 teaspoons ground allspice
4 teaspoons ground ginger
4 teaspoons  ground cinnamon
2 t ground nutmeg
2 teaspoons  organic dark brown sugar
1 cup ketchup (I used some homemade vanilla bean ketchup)
3 Tablespoons soy sauce
1/2 cup fresh lime juice
chicken pieces

Blend all of the ingredients - except the chicken -  in a blender to form a thick paste. Adjust texture by adding water if it's too thick. Rub the paste on the chicken and let marinate overnight. Then you can cook the chicken however you wish - grill it, roast it, or pan fry it. I roasted mine.

This global table ambassador is signing off for now. I'm excited about our virtual travel to Japan tonight!