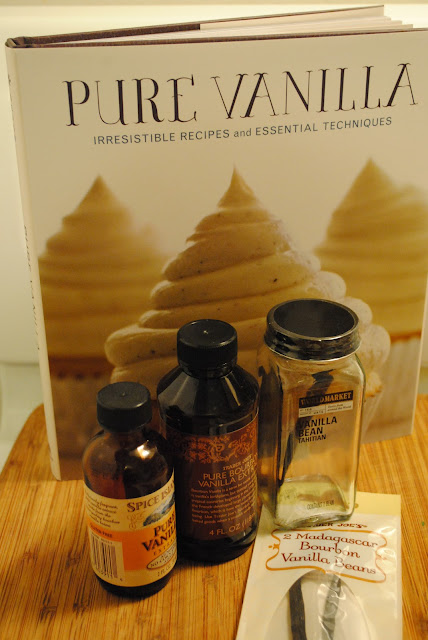 *Full Disclosure: I received a complimentary, advance copy of this book
- Pure Vanilla by Shauna Sever -
from the publishers for the purpose of reviewing it.*

When I first received the package from Quirk Books, giddy excitement washed over me as I tore open the envelope. I eagerly flipped through the pages, enthralled by Shauna Sever's prose and entranced by Leigh Beisch's photographs. I longed to reach into the pictures and pluck out a treat.

Then I got to work, surrounded by vanilla beans and vanilla extracts, and my enthusiasm transformed into sheer panic: What was I thinking? How could I possibly agree to review a cookbook? I can't follow a recipe to save my life! I rarely read a recipe, make a grocery list, and head to the store. I am always adjusting, based on what I already have in my cupboards. I use cookbooks as a jumping off point.

But I decided that I am not alone. I am certain there are other home cooks who do as I do. We own cookbooks not necessarily to follow the recipes to the letter but for inspiration. And - for those readers - I think my review will be perfectly reasonable. For the others, the recipe followers, accept my apologies in advance.

I will never underestimate the magic of vanilla again. We use the term 'vanilla' derogatorily, to mean plain, boring, ordinary. How completely misguided! Having spent the last week scraping the caviar out of the beans, infusing syrups, steeping pods, and immersing vanilla in salts and sugars, I see vanilla for the complex, exotic, and intriguing ingredient that it is. And, as Shauna writes, "It's high time to catapult this delicious ingredient into the superstar stratosphere where she so deserves to be!"

Before launching into her original recipes, Shauna encapsulates an almost 400-year history of the vanilla bean into nine points, taking the reader from the Aztecs conquering the Totonac Indians of Mexico in 1519 to Thomas Jefferson, then the U.S. ambassador to France, carrying a bundle of beans home to Monticello in 1789. In 1841 the 12-year-old son of a slave devised a way of hand-pollinating vanilla orchids; his process is still employed today.

She details the various forms of vanilla - yes, you can get it in more than just beans and extracts - provides tasting notes, and fields FAQs: Why is vanilla so expensive? How do I store vanilla? And what is French vanilla?

Her writing is accessible, her directions clear, and her recipes inspiring.

Never having written a cookbook review, I wasn't sure how many recipes to try. I ended up preparing about a dozen of Shauna's recipes. I used her Vanilla-Citrus Marinade on salmon filets and served it atop tri-color quinoa. I revamped some leftover bread and naan using her Vanilla Bean Bread Pudding recipe. I topped a poached egg with vanilla-flecked hollandaise and her Vanilla, Brown Sugar, and Black Pepper Bacon. I floated Vanilla-Agave Marshmallows in spiced hot chocolate. And I'll be using my vanilla salt and vanilla sugar for weeks to come; I am anxiously awaiting the two month mark to uncork my vanilla extract.

But the recipe that I truly adored, for its versatility in both sweet and savory applications, was inspired by her  Golden Pear Vanilla Jam. 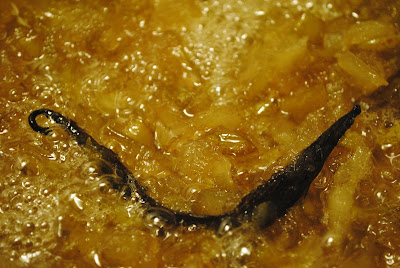 Harken back to my warning that I use recipes as inspiration. I skipped the pectin, halved the sugar, and doubled the lemon juice. 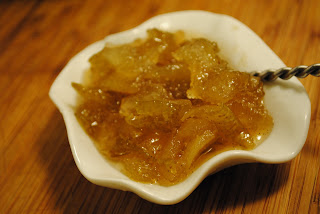 Procedure
Place all of the ingredients - except the juice from 1 of the lemons - in a large flat-bottom pan. Bring it to a boil. Reduce heat and simmer until the pears are tender, approximately 15 minutes. Mash the fruit with a potato masher as the pears soften. Keep simmering until the liquid has thickened to the point where a path remains if you drag a spoon through the center. Stir in the last of the lemon juice. Remove the vanilla pod.

Place the jam in sterilized jars, leaving about a 1/2" gap to the top. Gently tap the bottom of each jar on the counter to release any air bubbles. Using a damp clean towel, wipe the rims of the jars and secure the lids and rings. Process in a water bath for 10-15 minutes. Remove the containers with tongs and let cool on the counter.

You’ll hear the sound of tops popping shortly—a sign that a secure seal has been made. Or, you can refrigerate the jar without processing and use it within three weeks.

For a playful appetizer, I layered Prosciutto di Parma with creamy burrata on crisped slices of bread and spooned a dollop of bartlett-vanilla bean jam on top. Fantastic! 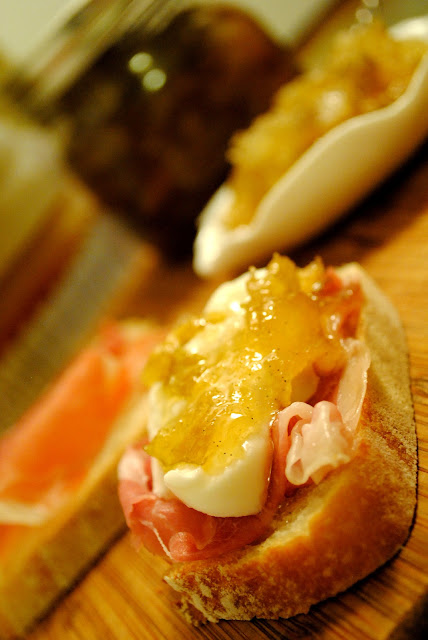 There you have it: I find this book to be pure inspiration. And though my review is done, I will still be cooking out of this gorgeous volume. I'm looking forward to trying her Tangy Vanilla Bean Panna Cotta and will certainly be toasting with a Vanilla Martini at some time in the near future.


If you want to learn more about vanilla and get inspired in the kitchen, check out Shauna Sever's Pure Vanilla. It's truly delicious!