It's time for the October Secret Recipe Club reveal. What's the Secret Recipe Club? It's a group started by Amanda of Amanda's Cookin' but recently handed off to April of Angel's Homestead. Each month, every participant is assigned to someone else's blog from which they pick a recipe - or two - to make and post, but it's all a secret until the big day. Today's the day. I always love a kitchen challenge and some culinary adventure...and meeting new-to-me foodie bloggers.

Meet Katie of This Chick Cooks who writes: "I'm on a mission to learn more about healthful eating day by day and broaden my palate as I go. Basically, I'm going back to basics trying to focus on natural, whole foods and avoid processed items such as white sugar, white flour, high fructose corn syrup...." A woman after my own heart. I have fully trained all three of my boys - Yes, that includes my husband. He took the longest. - to read labels. I love when they put something back on the shelf after seeing one of our "banned" ingredients. Gotta love that. Another thing I love: Autumn + Apples! 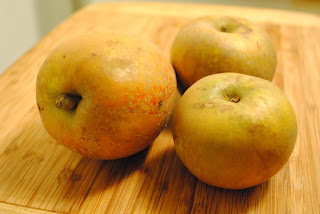 I was inspired by one of her sweet recipes - and what was in my High Grounds CSA box - for our Saturday late evening dessert. I used her Quick Apple Pie Pockets as my launching off point. I did make my own crust...with whole wheat flour...so my version wasn't really quick. The apples in our CSA box aren't your typical green or red ones; these are Hudson Golden Gems, an irregularly shaped, dull-skinned russet apple. They are the polar opposite of photogenic, but they are delicious - crisp, sugary, and juicy. They were perfect for this dessert. 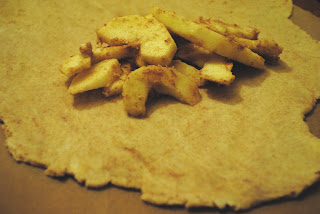 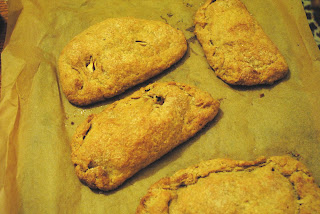 Place flour, salt and butter in a large mixing bowl; with a pasty cutter, cut butter into the flour and salt mixture until it resembles coarse sand. In another bowl, whisk together sour cream, water and lime juice. Slowly drizzle in the liquid mixture to the flour and butter, blending just until a rough ball forms. Pour out onto a lightly floured board and knead until just combined. Pat dough into a ball, wrap in plastic and refrigerate for one hour.

Remove dough from refrigerator and divide into quarters. Roll portions of dough to a thickness of about 1/8 of an inch. Place on a parchment-lined baking sheet then put baking sheet in the refrigerator. Chill for 30 minutes.

Remove dough from refrigerator. Place 1/2 C of apple filling on each round. Fold edges together to form a half circle and seal edges by crimping. Place back in the refrigerator for another 30 minutes. Remove from fridge. Sprinkle with sugar. Bake for 30-40 minutes or until golden brown. 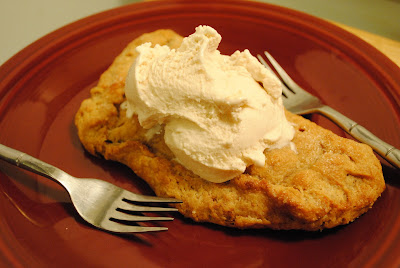 Jake and I shared a pie pocket with a scoop of vanilla bean gelato after the boys went to bed. Delicious! Thanks, Katie, for the inspiration. Next time I'll have to get some allspice because that sounds like it'd be a wonderful addition. I will be making these again soon.