I think I've been stalled on our tabletop travel because every time I think about researching recipes from Iceland, I'm reminded of Andrew Zimmern's trip during Season 2 of "Bizarre Foods." And while I loved the scenery and even enjoyed the puffin hunt, I gag just thinking about hakarl, the putrid shark meat dangling in the wooden shed. Andrew said, about that, "Eating it without gagging separates the men from the boys." I definitely would qualify as a "boy" or worse!

So, now that I've identified the source of my reluctance, I can battle it, right? Still, we are not going to hunt puffin or try rotten shark meat. But I found a chilled soup recipes - coupled with the fact that it's 90 degrees today - that is perfect! Tonight we are making chilled fruit soup from Iceland: Krækiberjasaft Súpa (Crowberry Soup).

What is a crowberry, you ask? Me, too. From what I can tell, crowberries typically grow on the tundra and in spruce forests; they are found all over the Danish Island of Fanø and grow rampant in Iceland. As far as a central California analog, they are similar to a blueberry. Then I found another chilled fruit soup recipe for Bláberjasúpa which was translated to both blueberry soup and bilberry soup. No clue what a bilberry is... 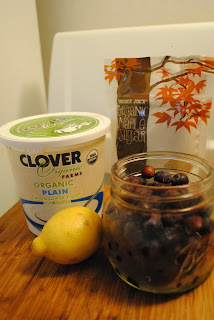 In any case, I really liked Megan Peck Cooks's version because it didn't require corn starch or any real cooking. Remember I wrote that it was 90 degrees. It's too hot to cook! And, yes, I know that I'm a wimp...regarding temperatures and eating rotten shark!

Combine water, blueberries, sugar, lemon juice, and cinnamon stick in a medium sauce pan. Bring to a boil then lower heat and simmer for 15 minutes. Remove cinnamon stick. Transfer soup to a blender (or blend with a hand blender) and puree until smooth. Whisk in yogurt. Chill and serve garnished with yogurt, blueberries, and lemon zest. 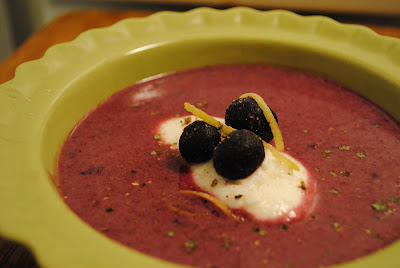 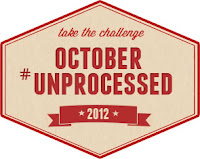 This is our kick-off dinner for October #Unprocessed. I served this with a triple fig-carrot salad.