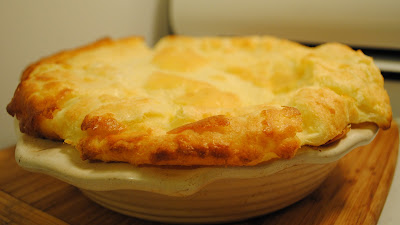 Have you ever seen a food and been transported to another time and place? It's a disorienting sense of deja vu that overwhelms you simultaneously with confusion and awe. Total bewilderment. That was how it was for me this morning when I pulled this out of the oven.

Despite having finished my book review of Shauna Sever's Pure Vanilla, I am still working my way through her recipes. They are all so amazing. And since it's the first day back from Fall Break, I wanted the boys fortified for learning. I popped my version of Shauna's Vanilla Bean Dutch Baby and a frittata made with leftover Danish meatballs, cauliflower, and potatoes into the oven.

So here's the deja vu: I lived in the Netherlands for three years as a child when my dad was stationed at an Air Force base. We didn't live on base; we had a house in town and I went to the neighborhood school and learned to speak Dutch...with the fluency of a kindergartener. I thought that I was Dutch and bemoaned my black hair and brown eyes.

Anyway, every Sunday we drove to a farm that served Pannekoeken, Dutch pancakes. The family cooked and served guests in their old barn. I always insisted on sitting in the loft, so my parents and I scaled the rickety ladder each week and were rewarded with platters of Pannekoeken. The funny thing is that I have never recalled what the Pannekoeken actually were. I just remember loving the name - Pannekoeken - and I remember the ladder. Until today... 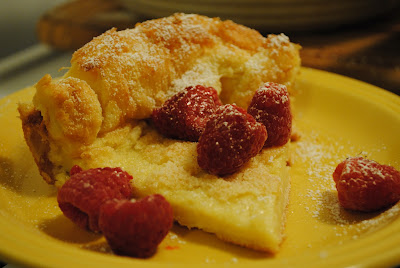 When I pulled the Dutch Baby out of the oven, I said, "Oh, my gosh! I remember these from Holland!" Jake looked at me as if I had three heads. You didn't know that's what you were making this morning. "No! I know that's strange." It's beyond strange, but I love you anyway.

So, here you go...this may not transport you three decades in the past, to another country, and up a ladder, but you will love this. I promise. It's light, fluffy, and so delicious. 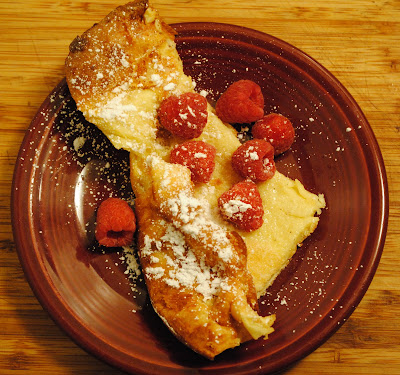 I skipped the sugar, didn't separate the third egg, and didn't use a blender...but I still achieved the heavenly 'wow' factor that Shauna wrote about. 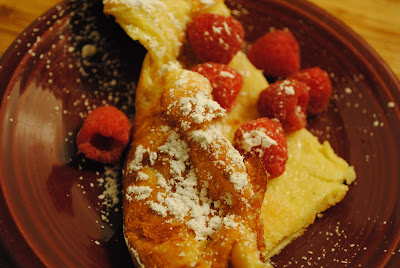 Procedure
Preheat the oven to 425 degrees. Butter a baking dish and set aside. In a large mixing bowl, whisk together the milk, eggs, melted butter, vanilla caviar, and vanilla extract. Blend in the flour and baking powder. Whisk for a full minute.

Pour the batter into your prepared dish and bake until the Pannekoeken is puffed and golden, approximately 30 to 35 minutes. Cut into slices and serve with a dusting of powdered sugar. I had some fresh raspberries, so I plunked those on top.