The Marriage of Sausage and Beer 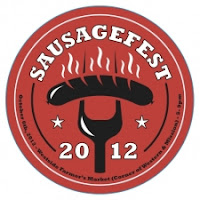 When I saw the blurb in Edible Monterey Bay's weekly e-newsletter about Sausagefest 2012, I knew that we had to go. Sausage + Beer. And Santa Cruz Brewing Company beers at that! It worked out that we could easily make it there on our way home from San Jose. Done deal.

Santa Cruz Mountain Brewing is an award-winning, local, certified organic brewery. Founded seven years ago, Santa Cruz Mountain Brewing handcrafts and handbottles unfiltered, lightly carbonated ales made with organic hops and organic grains. They do not, according to their website, strive to make consistent beer; they strive for great beer. I'm good with that...I rarely do anything the same way twice. 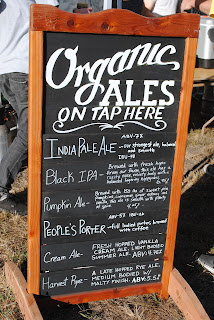 Teamed up with the meat-mavens at El Salchichero, Santa Cruz Mountain Brewing offered up some amazingly innovative creations. We had sausages flecked with sugar pie pumpkin, candied ginger, cloves, nutmeg, star anise, cinnamon and thyme and sausages flavored with blood orange, annatto seeds, shallots, caraway, and aji crystal chili. Other offerings that we didn't get to try - because we were stuffed - included a Black IPA sausage with dried plums, allspice, toasted cumin, and oregano.

Here's the pumpkin sausage that I washed down with pumpkin ale. 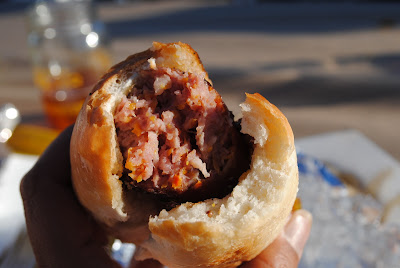 "To autumn, to adventures, and to sausages. Cheers!" 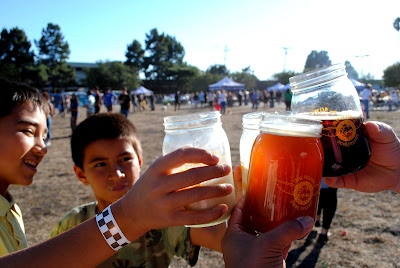