By Camilla M. Mann June 12, 2012
Last night Ulla and I attended a free raw foods workshop at our local library where I hoped to learn more about the benefits of eating raw and, possibly, get some great recipes. Sadly, I do not think that that presentation was geared toward anyone who already has a fruit basket in her kitchen, has had a subscription to a CSA for several years, and is not a gadget-kinda cook. I barely use a blender; I am certainly not going to start using a dehydrator, a Vita-mix, a spiralizer (I still don't know what that is!), and more.

No joke, one of the other attendees actually asked, "If it says 'organic' that means it's 'gluten-free', right?!? Half way through the introductions, I kept thinking: "Hi, my name is Camilla, and I love a tasty burger...cooked at 400 degrees with two slices of bacon!" Terrible, I know. But true.

Still I pride myself in being open-minded, so I came home and did some more reading about eating raw, why people eat raw, and how you can eat raw. Just to give it a try, I found several recipes for Warrior Pudding and decided to make it for breakfast instead of steel cut oats. 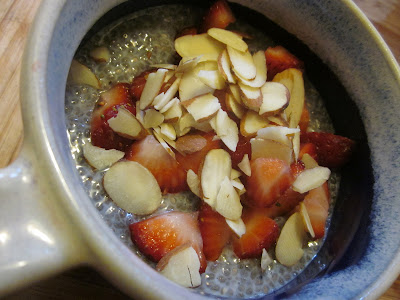 Warrior Pudding
inspired by The Wondering Veg and Choosing Raw 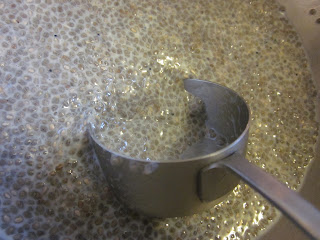 Place that in a bowl and let it soak overnight. Serve as you would oatmeal. With fresh berries or bananas. I topped mine with diced fresh strawberries and raw sliced almonds.

The verdict: This was certainly tasty and the texture was more like a pudding than a porridge. I would make it again, but I'm not sure it was a hit with the boys, despite the very manly name.