I have to say that I wanted to like this place. I really, really  did. I could never be a vegetarian again because I love meat. Sorry, Veg-friends. It's true. I was a vegetarian for the better part of a decade. And though we eat a lot of fresh vegetables and have plenty of vegetarian meals, lamb lollipops, roasted pork tenderloin, and tasty burgers top our favorites list!

After a fantastic morning in Point Lobos, I told the boys we were going to try out a new burger place. "Great!" they cried in unison. They are always keen for a culinary adventure. New places, new foods. They love it. 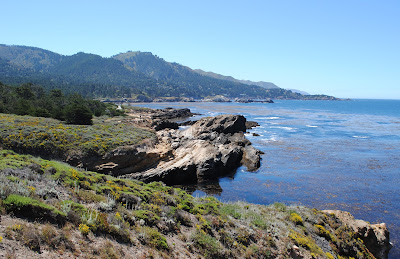 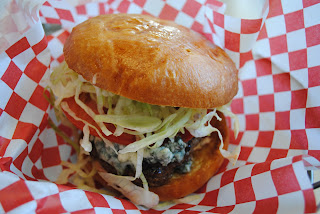 I usually make a concerted effort not to be negative and to give people and places a fair shot - at least once. But, seriously, within two minutes of walking into this restaurant, I wanted to leave. However, the boys had their hearts set on trying it, so I stuck it out. Needless to say, we won't be back.

That's one of the great things about living where we do: countless dinner options. I once read that even if everyone on the peninsula went out to dinner at the same time, three-quarters of the seats would still be available. I believe it. So, say what you want about new spots needing to work out the kinks, but 400 Degrees was definitely a one-timer for our family.
We won't be back. Did I already mention that?

The BAD...
Their ordering system is completely ridiculous and confusing. There is a large counter with a sign above it that reads: Order Here. I placed the order, received a table number, and a quick brush-off of "you pay at the table." Okay. So these gadgety things are sitting on the table with some kind of interface to the computers at the counter. I muddled through entering my table number and paying for my order. Then I realized that I forgot to order the milkshakes and tried to add them. It took three - no joke! - employees pushing buttons on the gadget, taking the gadget to the counter to re-sync it or something, and coming back with the gadget for me to finalize the order. Really?!? I would much prefer to walk up to the counter, place my order, and pay a real person. I am not a fan of gadgets just for gadgets' sake.

Sensory Overload
So I mentioned the table-gadget. It is supposed to be a tool to help with ordering and paying, but it also has games on it which my 8 and 10-year-olds discovered within a millisecond of picking it up. We don't have many games and gadgets at home. And what we do have is certainly not allowed at the dinner table. When we sit down to eat, we make eye-contact, we have conversations, and we enjoy each other's company. But, what the heck, we're trying something new. But, only two games are free. After that, you might unwittingly be paying $2 for your kids to ignore you. Not cool.

Second, there are two large televisions mounted on the walls at either end of the restaurant. So, no matter where you look, your eyes fall on them. I guess that's the point. But, we don't watch television when we eat and I didn't think we were going to a sports bar.

Third, even though you are pretty much forced to watch the television, you can't hear it because they are muted. But your ears are assailed with loud music. Remember what I said? We like to talk when we eat. It was almost impossible to do that with all of the distractions.

I felt as if the environment was set up for teenagers - from the games on the table to the volume of the music and the television on the wall. Fine. But that brings me to "bad" point number three...

400 Degrees is over-priced. I know it's Carmel. But it's still a burger joint. Two kids meals (hamburgers, fries, and milk), two adult burgers, and two milkshakes ran us sixty dollars, including a moderate tip. Sixty dollars for lunch. For burgers. Unreal. I would vastly have prefered to go to one of our favorite sushi places where we feast - sashimi, gyoza, sushi, inari, chicken teriyaki, seaweed salad, and more - for much less than that. So, if the goal-audience is teenagers, don't you think it would be more geared to teenager budgets?

What we ordered didn't come with what it said. Jake ordered their Jack Burger - local jack cheese, roasted chili pepper, picked onions, avocado. It didn't have any avocado. Perhaps it was an oversight, maybe they didn't have any avocados. But when you only have four things listed as part of a dish, taking one thing out - for whatever reason - is pretty sad.

The buns. Their brioche buns were a surprising addition to a burger. The buns were fluffy and pretty. And tasty, too. I never thought to serve a burger on brioche. I normally think lemon curd or something like that. So, using a brioche in a savory setting was a pleasant surprise, and one I'll mimic at some point.

The burgers. Not surprisingly, their burgers are good. Plain jane, but good. We ordered two of the kids hamburger meals. I suppose most kids like plain burgers. But it was completely plain. Meat and a brioche roll. Dylan asked, "where's the lettuce and tomato?" I pointed him to the condiment bar; all they had there, though, was ketchup and mustard. So, we had to ask for lettuce and tomato on the side. I already mentioned what Jake ordered. I opted for a burger with blue cheese. Basic, but nice.

The fries. Thick cut. Crispy. Yum. The boys' fries were plain. Jake and I split an order of Garlic Fries that weren't very garlicky. But they were delicious.

Looking at my comments, I guess I have to say that they have good food, but the atmostphere and less than conventional ordering system completely detracted from the experience. Out of five stars, I'd give them two. I'm glad we tried 400 Degrees. But that was a one-timer. Have you been? What do you think?