Cooking Around the World: The Danish Series

By Camilla M. Mann June 23, 2012
So far, with our virtual globe-trotting, I've dedicated one meal to each country. It's just enough to give the boys a taste of the cuisine and take a cursory look at the country's geography and culture. We are officially into the Ds and, in honor of two of my favorite gals who hail from Denmark, the first country on the list for 'D', I decided to try a series of different recipes.


A little bit about my Danish pals...first off, there's Rikke. Bella Rikke. Here we are, on the ferry, crossing the Strait of Messina, in 2001. 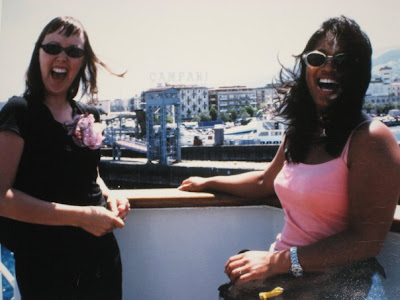 We met when we were both working in Rome as au pairs in the mid to late 90s. We both had school-aged children for whom we cared, so we would meet up everyday and see something or somethings new. With the number of churches and museums that dot that city, and despite our best efforts, we still didn't see it all. I can't imagine how people spend only a few days in Rome.

Our friendship has transcended that experience with her coming here three times - once for my wedding, once when I was pregnant with Riley, and once when I was pregnant with Dylan; and we've met up, once again, in Italy with families in tow to hop on and off trains and adventure all the way from Ustica to Florence with one week dedicated to our beloved Roma. And though I haven't seen her - in person in almost a decade - or met the love of her life, Martin, or met her gorgeous little boy, Anton, I know that when we do get to see each other, clink glasses, and eat fabulous food, it will be like we've never been apart. Mi manchi tantissimo, Bella! 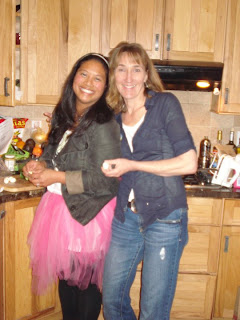 Then there's Ulla. Now, Ulla, on the other hand, I get to see almost everyday...at least when the kids are in school. Our families enjoy many of the same things, so we adventure together. Often. We've hit the ski slopes together; we've hiked, picnicked, and camped all along the California coast with them; we've fed bottle baby goats at an organic dairy; we've dissected squid and carted the kids to countless museums...you get the idea. But perhaps my favorite thing to do with Ulla and her family: relax at their property, letting the kids play outside with only their imaginations as a guide, soaking in the sun, reading books, drinking coffee, talking, laughing, and shooting bows and arrows!

Here we are at a UFO party - that explains my pink tu-tu, doesn't it?!? - after too many Martian Martinis.

So, here we go on a Danish adventure. I have Brunede Kartofler and Fyldt Svinem Rbrad on the menu for tonight. And I have a message in to both Rikke and Ulla for what is not to be missed. Stay tuned... for our Cooking Around the World: The Danish Series!