Carpaccio is, by definition, raw. The story I've heard is that carpaccio was invented at Harry's Bar in Venice and named for the Italian painter Vittore Carpaccio who was prone to using red in his paintings - the red of raw beef. So, the salad that bears his name is thinly sliced raw beef piled atop watercress or arugula, drizzled with a vinaigrette made with olive oil and lemon juice and topped with shaved parmesan cheese.

Photo credit:  http://www.azerbaijanrugs.com/mp/vittore_carpaccio7.htm
﻿﻿
I've been the Harry's Bar once, but I didn't have the carpaccio. Actually, I didn't have anything. I was on a strict budget with just enough in my wallet for an overnight stay, a kilo of tangerines, a wedge of cheese, and a bottle of cheap red wine. I just went in to Harry's and snapped a photo or two before heading on my to the convent on Giudecca where I was spending the night. 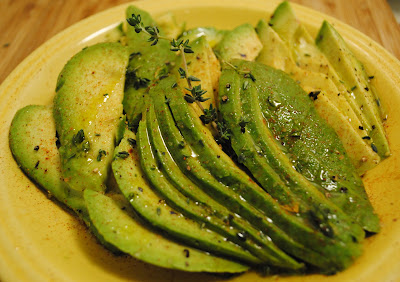 So, carpaccio is also, by definition, red which avocados definitely are not. But, of all the raw dishes I made tonight, this one was the favorite. Dylan declared, "I've never had avocados this good before!" Me, either.

To be able to slice the avocados and retain the shape, select avocados that are just under-ripe.

Slice the avocados and arrange them on a place. Sprinkle them with freshly ground pink Himalaya salt, flower pepper, paprika, and fresh thyme leaves. Drizzle them with lemon juice, olive oil, and some raw honey.
Posted by Camilla M. Mann at 9:37 PM