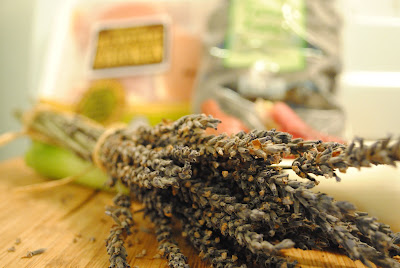 I had received a bunch of lavender from a friend awhile back, hung them to dry, and emailed her today to find out if they were organic so I could use them in this recipe. 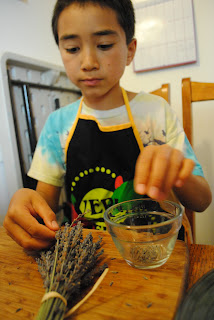 B: Gotcha!  Friend's garden and she tells me no pesticides. :)

C: 'Unique' that's code for 'OMG, I can't believe anyone would eat that!' ;) I tried to dissuade him from using the prunes, subbing dried cherries or something like that instead. You know what my 10-year-old said? "Mom, I LIKE prunes." Okay. I didn't realize that anyone actually liked prunes.

B: That's hilarious.  It will probably be delicious!

Well, it was delicious. Interestingly enough, the prunes didn't taste like prunes. They had a shitake mushroom-like texture and weren't sweet at all. Here's how we did it.... First Riley pulled the blossoms from the stems until we had 2 tablespoons. Then he chopped the dried plums (yes, that means prunes!). 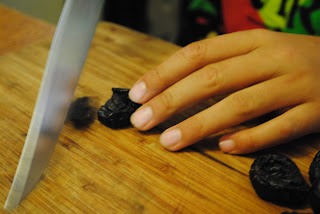 In a large, flat bottomed pan, saute two diced spring onions and one diced leek. When those are softened, add the chicken - 1 diced, boneless, skinless chicken thigh per person - and cook through completely. Add lavender, 1 T minced garlic, 1 C dried plums, 1 T honey, and 1/2 a bottle of beer. Bring to a boil, reduce heat, and simmer until sauce is thickened. Stir in 2 C wild arugula until just wilted. Season with salt and pepper. Serve with rosemary potatoes. 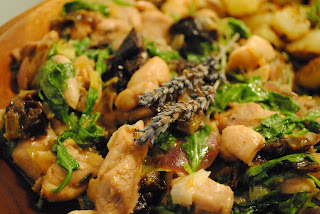