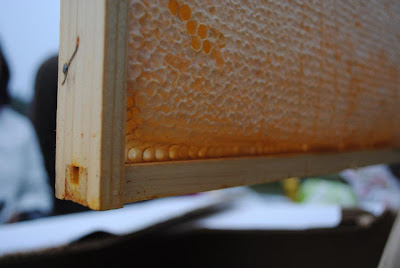 When I helped a friend at her organization's auction gala a few weeks ago, she took me by the hand, walked me over to a table, pointed, and said, "Cam, this has your name written all over it. You should bid on it." She was right and I bid, bid, and bid again in order to win a honeycomb from Acosta Farms in Salinas.

My thought: Riley will love this. I'll use this, instead of cupcakes, for his birthday treat to school. 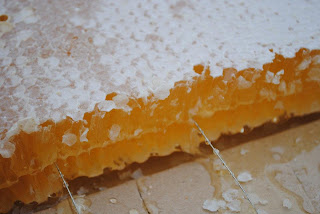 Well, he did love it, but intuitive foodie that he is, he also recognized that kids in his class might not think it was as cool as he did. So, he, kindly, requested zucchini cupcakes - without frosting - for his classmates, and said the he'd like to serve the honeycomb cake at his birthday camping trip. Done.

So, we toted the thing on our camping trip with five other families, gathered round and sang to the birthday boy, then cut slices out of the comb and served it up as his birthday cake. 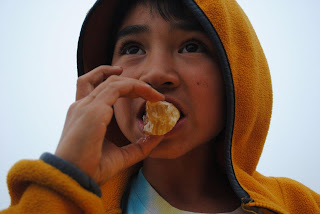 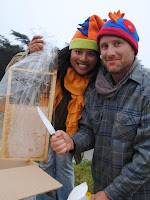 We all squished the wax around in our mouths to release the pockets of liquid gold, then spit the wads of wax out like discarded chewing gum. That and my child's excited declaration, as base as it was, "we're eating dried bee vomit!!!!" It was quite an adventure!
﻿