By Camilla M. Mann September 25, 2012
The Mann Clan non-conformist Thanksgiving tradition: create a menu and a feast that supports something important to our family, or something that the boys are studying in school. 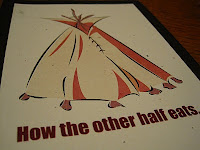 Two years ago, Dylan was learning about the shared table between the pilgrims and the Wampanoags, so I created a dinner with recipes from different Native American tribes. It included...

Last year, Riley was studying the Spanish colonial period of California, so we cooked some recipes from that time and place. Riley even hand-embroidered the placecards as he learned to do on a school field trip. We made... 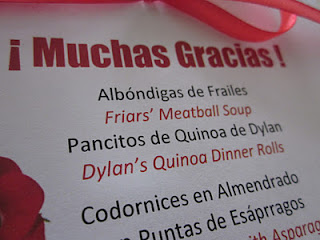 
When I asked the boys what we should do this year, Riley said, "Mom, I just started my 6-week unit on chemistry. I don't think you want to make a chemists' dinner. Do you?" No, not really. Dylan didn't have any pressing interests either. I jumped on the opportunity to do my idea.

For Thanksgiving 2012, I am going to create and cook a menu based on the bounty of our county. I have no idea what that will entail, but as I frequent the farmers' markets over the next month, or so, I'm sure some things will grab my attention. Whatever we make, you can be sure that it will be fresh, local, and delicious! I might just have to drag the boys out to the mushroom farm in Moss Landing again.