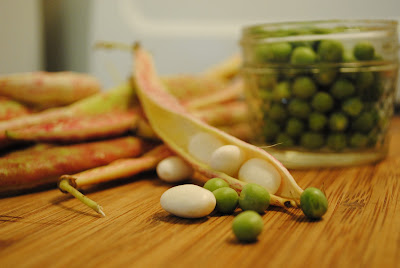 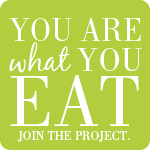 This week's challenge for the Food Matters Project was chosen by Kathleen + Tom of Life with the Lushers: Edamame Cakes with Soy Drizzling Sauce. From the look of their blog, they are a fun duo; and this recipe was fun as well. 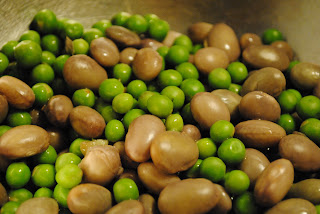 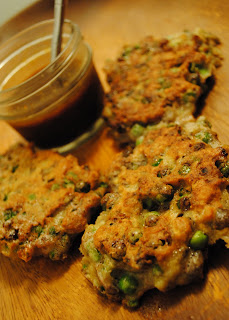 Add the shelling beans to boiling water and cook till tender; this probably took about 20-25 minutes. Drain the boiling water into a bowl and blanch the peas in the cooking water. Drain the peas and place both the beans and peas in a bowl. Use a potato masher to create a paste; you can make this as smooth as you want. I left mine fairly chunky. Add in 1 beaten egg and enough flour to form a thick batter. Season with ginger, salt, and pepper to taste.

Cook these in a large skillet, making them as large or small as you want. Cook until they are set and browned. 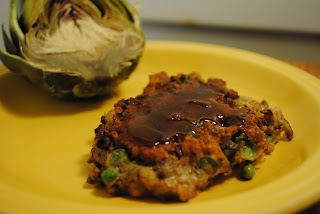 I served these as a first course along with steamed artichoke halves. Oh, and a delicious dipping sauce! I made the suggested dipping sauce and added a few ingredients of my own. Did I say that it was delicious?!? It was.

Combine in a bowl and serve over the cakes.

Click here to see what everyone else made...look in the comment section! And here's what the Lushers made.