Cooking Around the World: Grenada 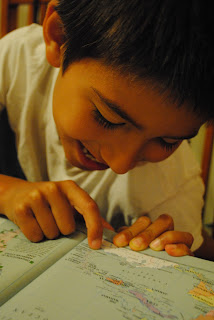 Grenada is an island country comprised of the island of Grenada and six smaller islands at the southern end of the Grenadines in the southeastern Caribbean Sea. It's located northwest of Trinidad and Tobago, northeast of Venezuela, and southwest of Saint Vincent and the Grenadines.

Some fun facts: Grenada is also known as the "Island of Spice" because of the production of nutmeg and mace crops of which Grenada is one of the world's largest exporters. Its capital is St. George's. And the national bird of Grenada is the critically endangered Grenada Dove. 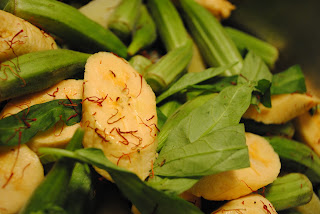 When I was searching for traditional Grenadian recipes, I kept coming across variations of the Oildown; it's considered the national dish - a onepot meal cooked in coconut milk until all the milk is absorbed, leaving a bit of coconut oil in the bottom of the pot. Some recipes call for a mixture of salted pigtail, pigs feet (trotters), salt beef and chicken, dumplings made from flour along with breadfruit, plantains, yam, potatoes, and greens for extra flavor.

Some recipes called for curry. I opted for saffron...and I made a quasi-vegetarian version, skipping the pigtail, trotters, and salt beef. It wasn't totally vegetarian beause I used organic chicken broth for liquid. I filled the pot with onions, breadfruit, plaintains, okra, mushrooms, some (unknown to me) fruit and greens. They looked fresh and I figured they would make a good addition to my oildown. And, they did! 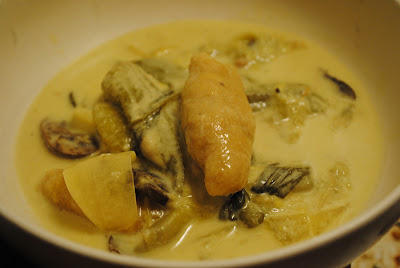 Place all of the ingredients into the pot, cover them with a half and half mixture of coconut milk and chicken broth. Bring to a boil. Reduce the heat to a simmer and cook for about an hour. Add sinkers (Grenadian dumplings) and cook for another 30 minutes. Serve hot.