By Camilla M. Mann September 01, 2012
Riley's class kicked off a cultural heritage project last week. He has to answer the following questions: What is my culture? How it is expressed in the things that I do, think, and value? How did I acquire that culture? Where did it come from?

He came up with a great idea of how to illustrate his ethnic heritage. I won't share what he's planned just yet, but - as expected - I'm supporting the project in the kitchen. So, over the course of the weekend we're going to eat our way through some countries that are in his blood. My side is easy - the Philippines. Jake's side is slightly more varied; we narrowed it down to four. Though there are probably more lines in there, Riley is sticking to these - Sweden, Portugal, Ireland, and Germany. Here we go with Cultural Heritage Through Culinary Delights - Part I...

Last night we had sausages and sauerkraut. Riley didn't care for it. He said, "It's sour, Mom. Is that why they call it 'sauer'?" Not being a German speaker, I double-checked with Google Translate; it rendered 'sauer kraut' as 'sour herb.' Okay, so, yes, sauer, cognate that it is, does mean sour.

This morning, for breakfast, I made Swedish pancakes that we smeared with some lingonberry jam that I found at Cost Plus World Market. I love that store! Lingonberries are the sour fruit from a short, dense shrub that grows wild in the boreal forests near the artic tundra. Lingon, in Swedish, is the name of the bush. Jake's mom is half Swedish and half Portuguese. This is for Grandma's mom. 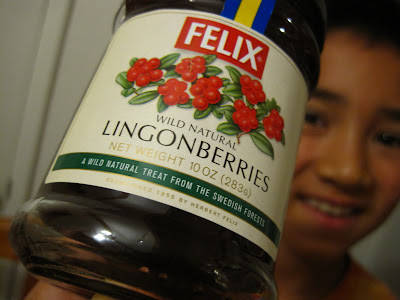 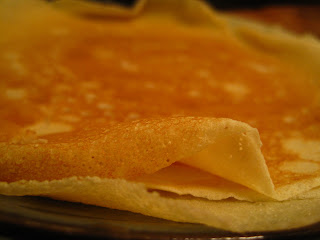 Add all ingredients to a bowl and mix well until all clumps are gone. Let rest for at least 20 minutes. Heat a large flat-bottom pan and rub the bottom with butter.

Pour the batter in the middle of the pan and quickly make a tilting motion to distribute the batter all over the pan. The goal: have as thin a batter layer as possible. 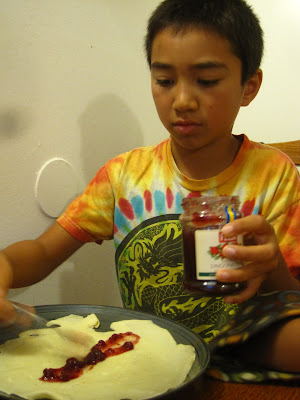 Cook until the pancake is a bit stiff and flip over, cooking for another minute The pancake should be lightly browned on both sides.

Repeat till all the batter is used; I made 12 pancakes with the amount listed.

Smear with jam and roll up. Låt oss äta!