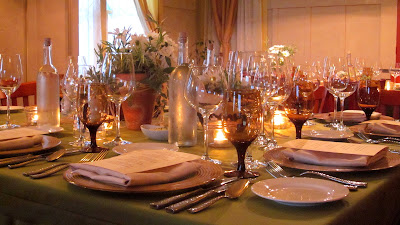 Though I attended a concierge luncheon awhile back, chatted with Chef Jon, met Tamie, and wrote a preview about the event for Edible Monterey Bay, nothing prepared me for the heights to which La Crème would raise the bar for the Edible pop-up events. Calling it la Crème de la Crème is not an exaggeration. Last night's dinner at La Crème was beyond spectacular. 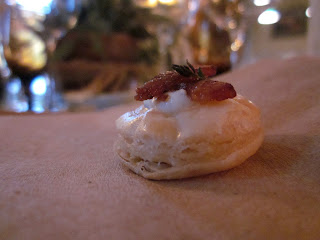 As we stepped over the threshold, Anthony Pessagno - of Pessagno Winery - was offering flutes of sparkling wine while servers circulated with tantalizing bite-sized morsels. I didn't catch the name of what they were calling this, but it was flaky dough smeared with buttery, soft cheese topped with bacon and fresh herbs. So many textures and big flavors in such a small bite.


We kicked off the feast with a pear and arugula salad paired with Pessagno's La Estancia Reisling. Warm goat cheese blanketed in bread crumbs sat atop poached pears and greens dressed with a Pedro Ximénez vinaigrette. Pedro Ximénez is a white grape varietal from the Canary Islands that is often used in Spanish sherry vinegars. A generous sprinkling of toasted hazelnuts launched this salad to out-of-this world status. 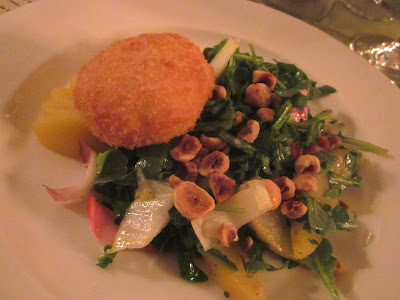 When we had first gotten a glimpse of the menu, last week or so, we schemed about which entrees we were going to order, making sure that - between the three couples - we all would be able to taste each offering. There was no need for all those logic games - if Cam gets the duck and Jenn gets the white bass, then... - each diner received all three entrees. Oh my goodness! There was so much food. And it was all amazing. 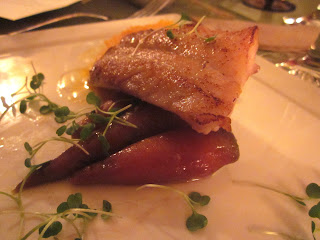 The first entree would have been Jake's pick: seared California white bass paired with Pessagno's La Estancia Chardonnay. And on the plate as well - winter squash puree, young carrots, micro-greens confetti, and bacon jam. That is not a mis-print. Bacon jam. Think salty + sweet  + smoky. I wouldn't have a clue where to start if I were to try to replicate it. 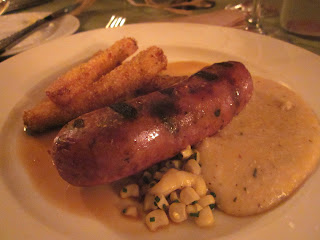 Next up was my pick, just from the menu description: grilled duck and fig sausage paired with Pessagno's La Estancia Pinot Noir. It was a corn-lover's delight with a creamy polenta, polenta sticks, and fresh corn. Though this would have been my pick - of the three entrees - I think it was my least favorite of the three. Still, it was dynamite. 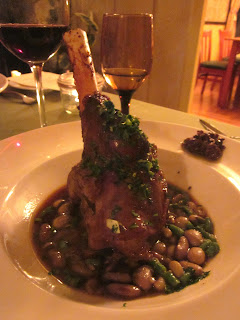 And the hit of the evening: braised lamb shanks paired with Pessagno's Idyll Times Vineyard Zinfandel. Chef Jon served this with some shelling beans, an olive relish, and a gremolata. Gremolata, a combination of chopped herbs and lemon peel, is the traditional companion to ossobucco, braised veal shanks.


It was too bad we were all so full; none of us could give it a proper devouring. But - thankfully - Tamie wrapped up what we couldn't manage to eat and we are all enjoying these again today! 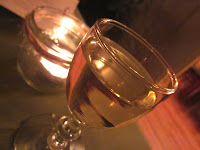 We finished the evening with a fig and raspberry crostata, toasted almond crunch, and a scoop of elderflower ice cream paired with Pessagno's Late Harvest Orange Muscat. 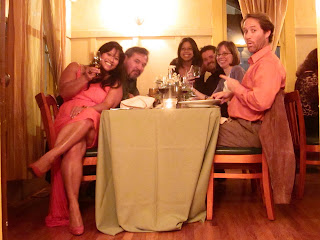 And - lest you think this adventure was all about the food and wine - the dinner was a smash because of the friends with whom we shared it. I love having people around me who feel the same way about food as I do. It's more fun that way. 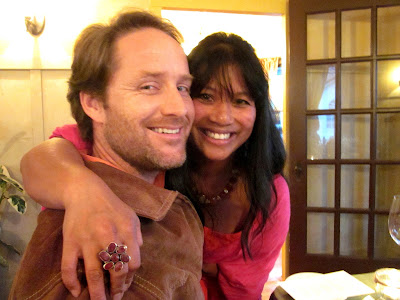