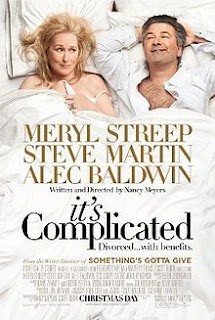 When I saw that France from Beyond the Peel was hosting Food'N'Flix this month...and I saw her pick - It's Complicated - I ran right out to the store and rented the DVD. I've seen the movie before, thoroughly enjoyed it, and was happy to watch it again. Twice. France is one of my favorite foodie bloggers and I love that movie!

Click here to see France's invitation to her movie selection along with a bonus recipe of her any time caprese salad.

It's Complicated tells the story about previously married couple Jane (Meryl Streep) and Jake (Alec Baldwin) who find themselves engaged in an illicit affair, hiding their trysts from their three children, soon-to-be son-in-law, Jane's current love interest (Steve Martin) and Jake's current wife. Hmmm. That is definitely complicated. But, then again, what marriage isn't complicated, right?!

Add to the comical plot a garden to die for and her very photogenic bakery and you have a foodie dream come true. The only difficult thing to do: pick a recipe.

An obvious choice would have been her Croque Monsieur or lavender ice cream. Or even the decadent chocolate cake that she's stuffing in her mouth during a marajuana-induced munchie attack. But I opted to make roasted chicken and blanched green beans.

It's (her) Jake's favorite dinner and I loved the sentiment: no matter how much water is under the bridge in a relationship, you still remember his favorite dinner. And we all know the way to a man's heart is through his stomach. At least it was that way for me and (my) Jake. He jokes that the only reason he proposed to me all those years ago was because of my mad skillz in the kitchen! I don't think he's totally kidding, either. 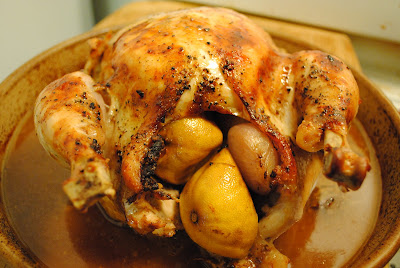 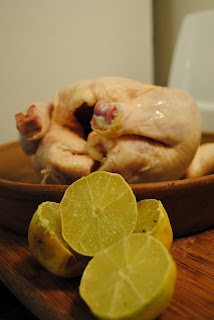 I'm not big on stuffing birds with something I'm going to eat, i.e., bread stuffing, but I'll happily stuff the bird with things that will impart flavor and help it retain its shape during cooking. What I stuff with depends on what's in my fridge. Today, I had limes and shallots. So, halved limes and whole shallots it was. 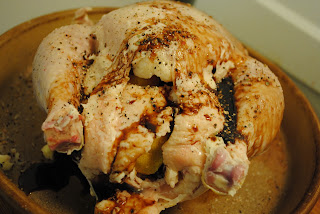 While I preheated the oven to 375 degrees, I rubbed the chicken's skin with butter, sprinkled it with freshly ground pink Himalaya sea salt, freshly ground rainbow pepper, and gave it a dousing of aged balsamic vinegar. Then I covered my baking dish and put it in the oven for an hour.

Then I uncovered the bird, basted it in its own juices and roasted it for another 20-30 minutes until the skin was brown and the drumsticks begin to pull away from the rest of the chicken. Continue basting every ten minutes, or so, to keep the bird moist. 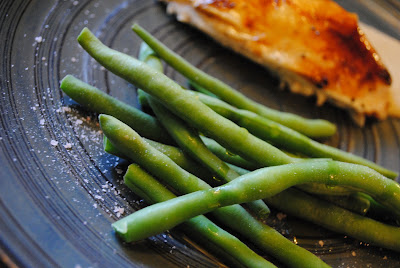 While movie-Jake's side dish of choice was sauteed green beans, I prefer my beans to crunch. So I barely blanched them, sprinkled them with sea salt and drizzled them with olive oil.

You still have plenty of time, if you want to cook and blog about It's Complicated; the posting deadline is September 23rd. Or next month we'll be watching and cooking from Attack of the Killer Tomatoes. Never seen that one before...hmmm. Should be festive for Halloween. Wanna join the fun?﻿

I still have a few weeks. If the Indian summer continues, I might just have to whip up some lavender ice cream before the month is through.