HOW TO: Shuck Oysters + A Few Serving Ideas #FishFridayFoodies 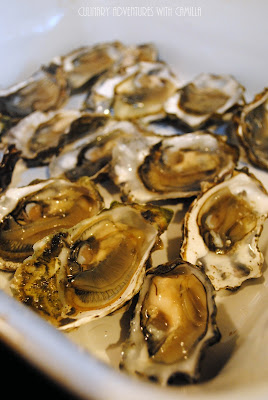 It's time for Fish Friday Foodies' September event. We are a group of seafood-loving bloggers, rallied by Wendy of A Day in the Life on the Farm, to share fish and seafood recipes on the third Friday of the month. And Wendy herself is hosting September's event.

She wrote: "Fall is here....that means it is Oyster season. Share your favorite oyster recipe with us. On the half Shell? In Chowder? Added to stuffing? With pasta? The possibilities are endless."

Before I get to my post for the event. Here's the rest of the #FishFridayFoodies' oyster offerings...


I'll admit: I have a love-hate relationship with oysters. I love them. Loved them. But, after one too many oysters in New Orleans when we were there for a SCUBA convention many, many moons ago, I developed a sensitivity to them. Yes, I may have had over a dozen raw oysters on my own. Maybe. In any case, I was miserable - stomach cramping and all - for an entire day. And, ever since, it's a fifty-fifty chance that I'll have the same reaction. I've eaten half a dozen fresh oysters from Morro Bay that didn't affect me at all; then I've eaten just one from Tomales Bay that sent me to bed in tears.

There's no rhyme or reason to it. So, I usually steer clear. But if I can get them super fresh, I usually decide to risk it. First, though, I have to shuck them. Here's ..


How to Shuck Oysters 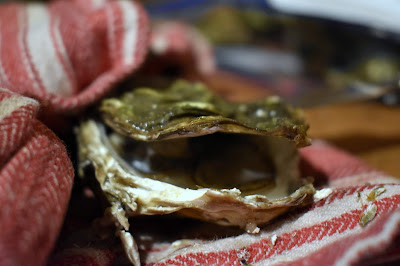 Scrub the oysters clean with a brush. Rinse with cold water. Steady the oysters in a dish cloth. 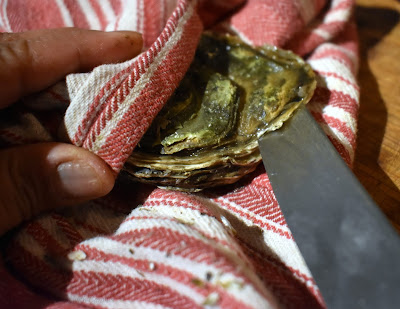 Insert the tip of a knife between the shell halves, and slide it around as you pry it open. Using the knife, pull the muscles away from the top, flat shell and bend the shell back. 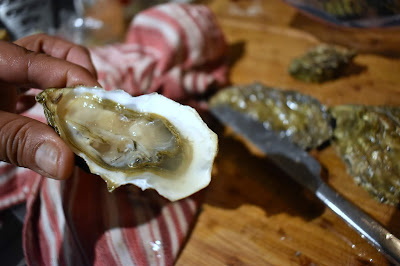 Discard the top shell. Leave the oyster in its shell. Nestle the oysters in a bed of breadcrumbs to keep them steady. 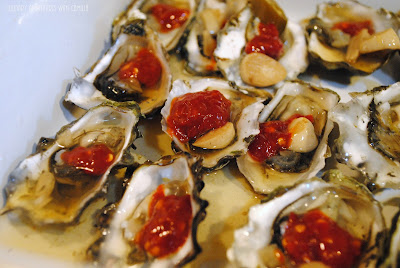 Steam them in their own juices with some picked garlic and a dab of red chili paste. 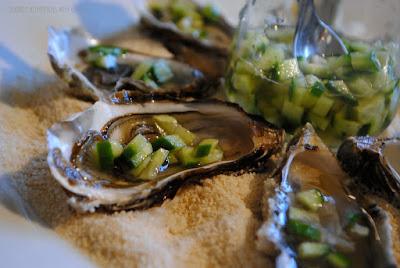 Top them with mignonette. This is my cucumber mignonette version. 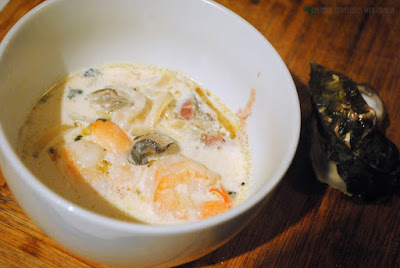 Stir them into an oyster stew. 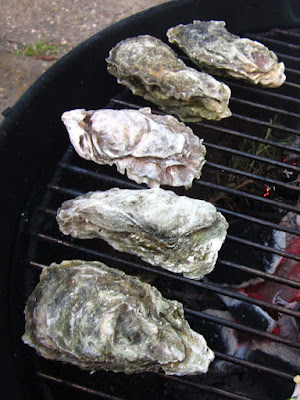 Or just toss them on the grill, unshucked! Once they pop open from the heat, slurp them down!

Well, that's it for this month. Next month the group will be sharing recipes for poached seafood. I can't wait.