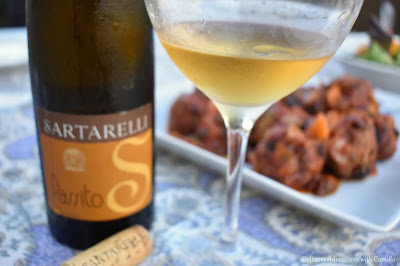 This month the Italian Food Wine Bloggers have been tasked to taste and pair Passito wines. Katarina of Grapevine Adventures is leading the discussion this month. You can read her invitation here.  If you're reading this early enough, join in the live Twitter chat on Saturday, September 7th at 8am Pacific time. You can follow along with the hashtag #ItalianFWT. And make sure you include that if you post a comment or question. We'd love to have you join us.


About Passito
My first reaction was, "What kind of wine?!?" This is completely new to me. Well, that's not totally true. I've read articles by my fellow #ItalianFWT bloggers, including...

But, I had never tried one for myself. This was the perfect opportunity to change that. I also did a ton more reading about this so-called 'raisin' wine.

Passito is a dessert-style wine made by a drying process called appassimento which involves drying grapes in the sunshine on straw mats or, more typically, in airy rooms or barns, in order to concentrate the grapes’ flavors and sweetness prior to vinification. This drying process causes the grapes to lose moisture, shrivel and become more concentrated with sugars and flavors.

Jennifer of Vino Travels shared this photo with the group, captioning it "here is my personal picture from when I visited the Veneto wine region and the process of drying the grapes." What a fascinating process! 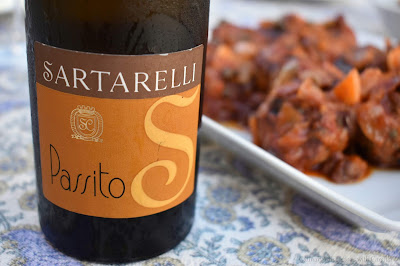 I was able to track down a bottle of Sartarelli Verdicchio Passito 2013 and was excited to learn more about the Sartarelli family business that is based in Poggio San Marcello, the smallest village in the province of Ancona in the Marche region. They are one of the few Italian wineries that is centered completely on a single varietal, in this case Verdicchio. Their story starts with patriarch Ferruccio Sartarelli who was a baker before he decided to invest in vineyards. His daughter Donatella followed in his footsteps; she now manages the company alongside her husband, Patrizio. And their children are also deeply entrenched in the family business. Caterina heads up export sales while Tommaso is an oenologist.

Produced exclusively from Verdicchio grapes, these grapes from the Balciana area are put on trellises and left to shrivel for about a month. Then, the vinification process takes place in December. 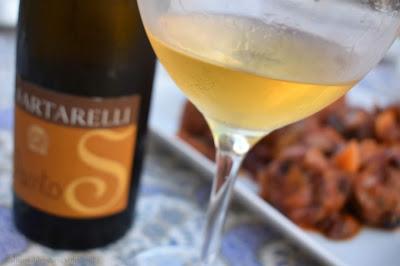 This wine poured a bright amber hue. On the nose, it was a heady mixture of floral quince and tropical lychee though there were some undertones of pepper and fennel. On the palate, it had an almost creamy mouthfeel with significant honey notes.

I had read about other Passito wines that have more pronounced herbal qualities and would match well with lamb, elk, and venison; unfortunately, this Passito didn't have those leafy, herbal characteristics at all. So, it didn't work for the pairing I'm sharing. Darn it. But I will post - below the recipe - a few things that did complement it well. And, despite the pairing not working well, the meatballs alone were stellar. 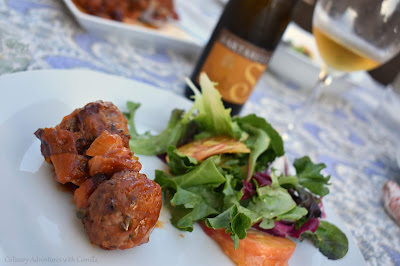 I already mentioned that this did not work well as a pairing for the Passito wine. However, it was a smash hit as a dish. So, I'm sharing it with the caveat at that you should look for a different wine to pour with it. I'm thinking any Sicilian red, but maybe something with ancient indigenous grape varieties of Nerello Mascalese and Nerello Cappuccio! 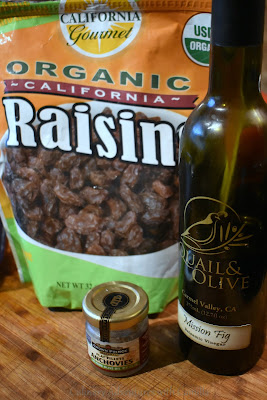 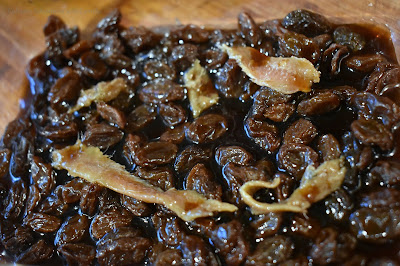 Meatballs
About an hour before you want to cook - or longer if you need to - place the raisins and anchovies in a small container. Pour the vinegar over the top and let stand. When you're ready to cook, place the raisins, anchovies, and vinegar in a blender or food processor and pulse a few times to break down the raisins. 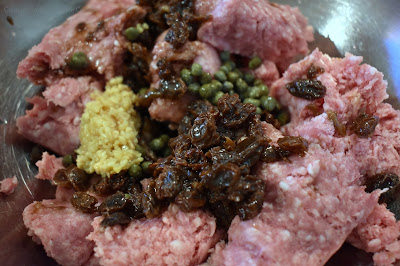 Place the ground lamb in a mixing bowl along with the raisin mixture. Add the garlic and capers. Use your hands to mix everything together until well-incorporated. Form meatballs and place them on the prepared baking sheet. I opted to make these large, probably two heaping tablespoons each. I made twelve out of the pound and a half of meat. 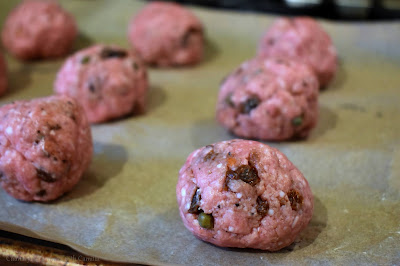 Place tray in the oven and bake for 35 to 40 minutes. The meatballs should be firm to the touch and lightly browned. While they bake, make the sauce. 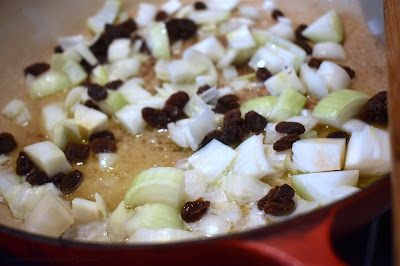 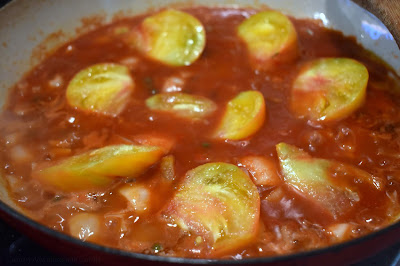 Pour in the sauce and wine. Stir to combine and lay the slices of tomatoes over the top. Cover the pan and simmer until the meatballs are ready. 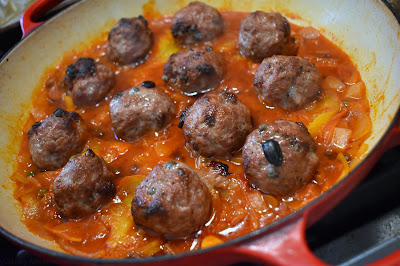 Drop the cooked meatballs into the sauce. Simmer for a few minutes and turn to coat the meatballs with sauce. 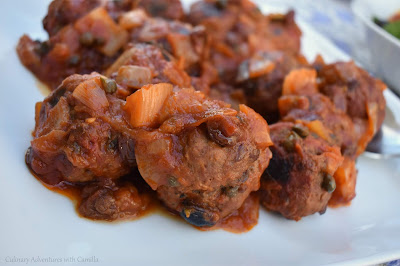 To serve, place the meatballs on a platter or individual serving plates. Spoon the sauce over the top. Serve immediately. 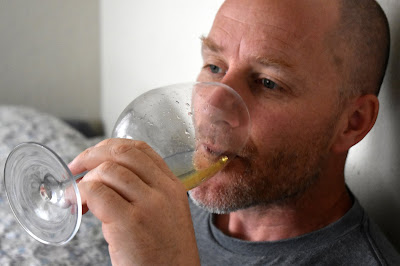 While the meatballs and wine pairing didn't work for us, Jake and I gave it a go with a few other pairings. 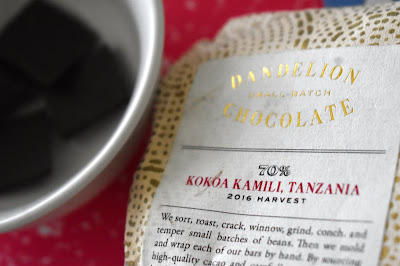 The Passito worked well with the 70% chocolate from Tanzania that we tried. The creaminess of the wine toned down the bitterness of the chocolate. 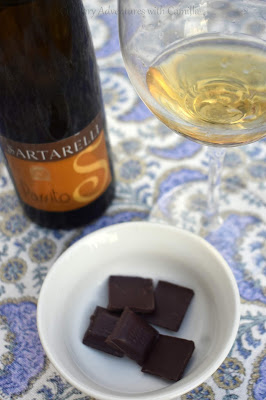 The wine also worked with the Apple Sharlotka I made for my September Cake Slice Bakers post. That recipe will post soon, but here's a photo... 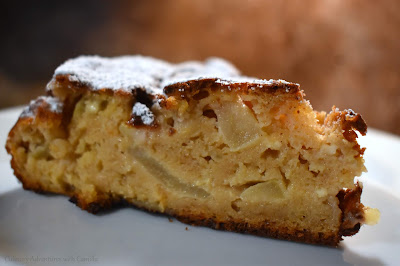 So, my Passito pairing wasn't such a great match. But Jake and I found a few other things that were enjoyable. I can't wait to read more about the others' pairings. And I'm glad to have had the chance to shine the spotlight on a completely new-to-me wine. Grazie mille, Jen. And cin cin a tutti!