It's Time Toffee Bars...and Time for a New Book #FoodieReads 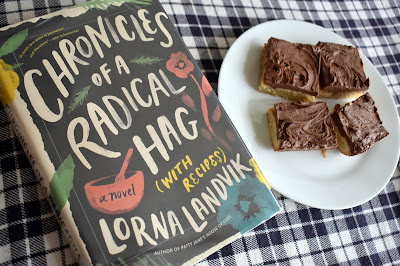 I'll admit: I picked up Chronicles of a Radical Hag (with Recipes): A Novel by Lorna Landvik* at the library for the cover...and the title. I mean, how could a book with that title be anything but hilarious. Well... 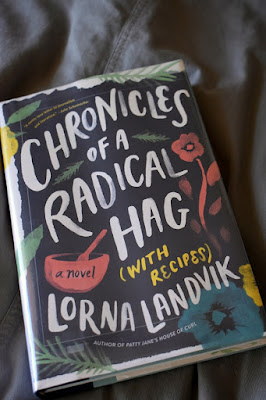 The first time I picked it up, I got about 25 pages into it before I put it down. The second time I tried, I got further and was mildly interested in the characters. Then I just plodded along, regretting each turn of the page after about pages 200. The book is formulaic, the plot meandering, and it's far too long.

I will say that I loved the idea of the book. The so-called radical hag is an octogenarian who wrote a column in a local newspaper. She suffers a stroke early on. And the rest of the book tells her story as the current publisher - the granddaughter of the publisher who hired Haze - reprints the hag's old columns along with selected reader responses to the columns. That sounds like an intriguing literary strategy, right? Well, implementation was less than stellar. 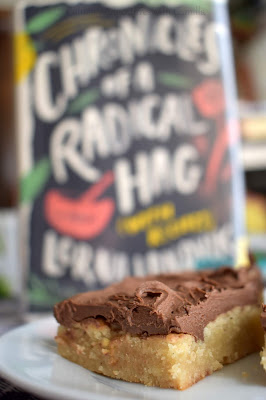 And, given that '(with recipes)' is part of the title, I expected to - at least - have some interesting recipes to try. My favorite recipe was a response written in a letter to the editor.

"Here's a little recipe I'd like to pass on to her:
1 cup personal interest stories
1/2 cup wit
1/2 cup insight
1 T local flavor
Mix well, and serve to an appreciative public. Meanwhile, toss out all political rants and smart-aleck recipe titles. (pg 243). 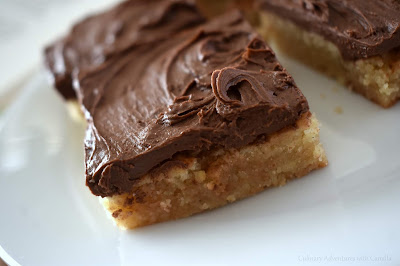 All of Haze's recipes were baked treats, including Supreme Lemon Bars, Millie's No-Nonsense Macaroons, Spread the Love Banana Bread, and Heavenly Honey Muffins. But the one I decided to try was her It's Time Toffee Bars though I did hand the book to my boys and ask, "Tell me what about this recipe irritates me." Jake said I'm sure there's something misspelled it in. Ding, ding, ding. Correct answer. Do eggs pull little carts? Nope. So, what the heck is an egg yoke?!?

Procedure
Preheat oven to 350 degrees F. Place butter and sugar in a medium saucepan. Heat over medium heat until the butter is melted. Place flour, egg, and vanilla paste in a large mixing bowl. Whisk in melted butter-sugar mixture until a sticky dough forms. Press the dough into the bottom of a 9" x 9" baking dish and place in the oven.

Bake for 20 minutes. Remove the pan from the oven and sprinkle the chocolate chips over the top. Let stand for 2 to 3 minutes until the chips are softened. Use a spatula or knife to spread the melted chocolate over the top.

Cut into small squares to serve.