By Camilla M. Mann September 13, 2019
This is a sponsored post written by me on behalf of Donkey & Goat Winery.*
All opinions are my own. 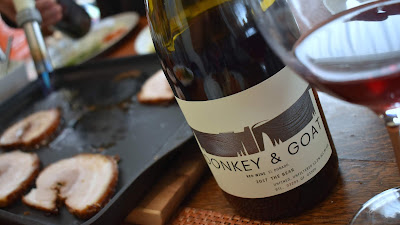 Last year I worked with Jared and Tracey Brandt, of Donkey and Goat Winery*, to create a pairing for some of their new releases in the Spring. I tested a Shrimp and Clam Paella and Chicken Tagine with Preserved Lemons, Roasted Peppers, and Olives both to pair with their Grenache Blanc Skins. But, in the end, the recipe I shared with the Brandts that they, in turn, shared with their wine club members was my Petrale Sole, Fennel, and Potato Gratin.

So, when Jared emailed me again about collaborating with them on this year's Fall releases, I was in. Immediately. Tomorrow the Brandts and the Donkey and Goat team host their Fall release party. And though I can't be up there, I am sharing a recipe I created for their 2017 The Bear. 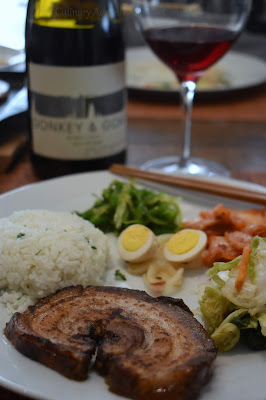 After reading notes on the 2016 The Bear, I emailed Jared and Erin Callahan: "Reading notes on the 2016 The Bear, I was intrigued by the salinity and black tea mention which brought me down the Asian cuisine road. Any thoughts on how the 2017 would pair with soy sauce??" Erin responded that one of her coworkers recommends a soy sauce that she makes with pork belly and taro. Intriguing!

When I received the wines, I tested them with two to three recipes each. This one was a hands down favorite. Though it does take some planning, it's not difficult. You just need to braise the pork belly the night before you plan to serve it. 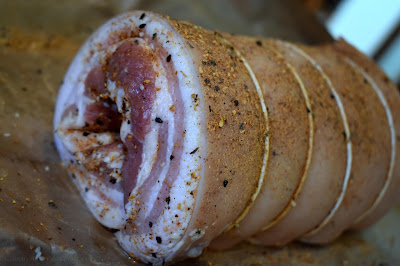 **I used the torch at the table because that always brings a smile to my family's faces. But you can just as easily char the pork belly under the broiler before serving.


Procedure
Chashu
Place the pork belly, rind side down, on a work space. Sprinkle the top with 1 T Shichimi Togarashi.
Roll the pork belly into a cylinder, with the ends showing the varying layers of meat and fat.

Run some cotton twine to secure the pork into its cylindrical shape. Rub the remaining 1 T Shichimi Togarashi on the outside of the roll.

Heat the oil in your pan (I used a Dutch oven). Add the rolled pork belly to the pan. Sear the pork belly on all sides and the ends. It should take about 12 to 15 minutes to go all the way around.

Add in the aromatics - Spring onion or leek, garlic, and ginger - and pour in the sake, soy sauce, water, rice wine vinegar, maple syrup, and sesame oil. Bring the liquid to a boil, then reduce the heat to simmer and cover. 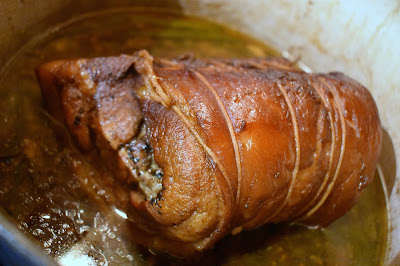 Let the pork belly braise for 3 hours, turning the roll every half hour or so. After 3 hours, the pork should be a deep mahogany color and the liquid reduced. Let the meat cool slightly before handling it. Once the meat is slightly cooled, transfer it to a lidded container and pour the sauce over the top. Let the meat rest, in its cooking sauce, overnight.

After the meat has rested overnight, you can scoop out the solidified fat from the cooking sauce and discard it. Reserve the sauce for future uses. It's a great addition to stir-fries and marinades. Or you can use it as a dipping sauce for the Chashu. 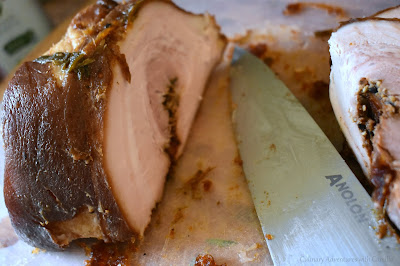 Serving
Cut the twine with kitchen shears and untie the roll. Slice the Chashu into ¼" slices. 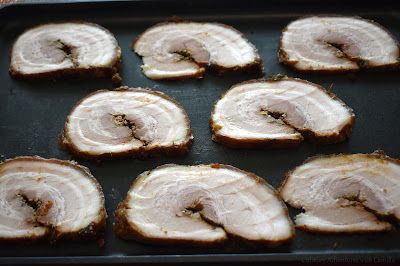 Place the Chashu slices on baking sheet and broil them. 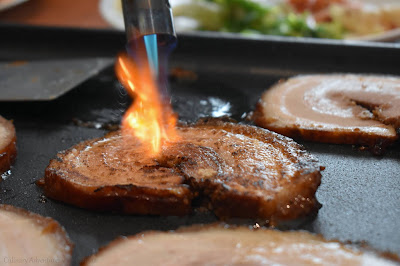 Or, as we did, use a culinary torch at the table. There's something about fire that always makes my husband and our boys grin from ear to ear. Maybe it hails back to caveman days. Hilarious. In any case, use the torch to char the fat and give the slice a nice burnished look. 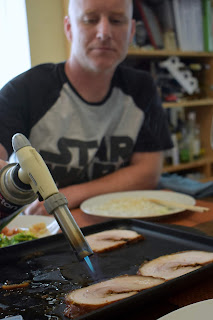 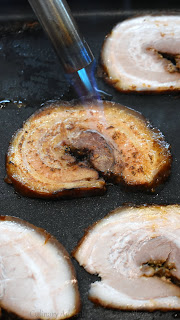 I served this with steamed rice and an assortment of pickles or fermented dishes, including two kind of kimchi, pickled quail eggs, and a seaweed salad. 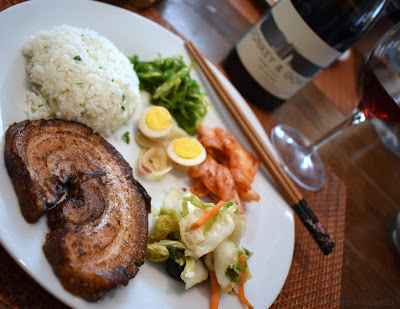 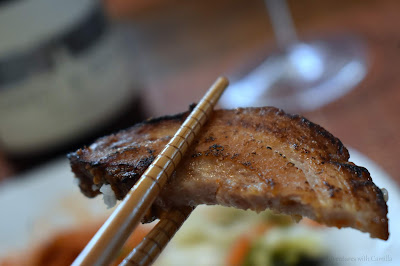 In the end, the Torched Chashu didn't retain any flavors that were definitively soy. In fact, all three of my boys said, "What soy sauce?" when I commented that I picked this dish because I thought the wine would pair nicely with a soy sauce-based dish. All of the flavors must have blended together in what My Enthusiastic Kitchen Elf correctly identified as, "Umami!" 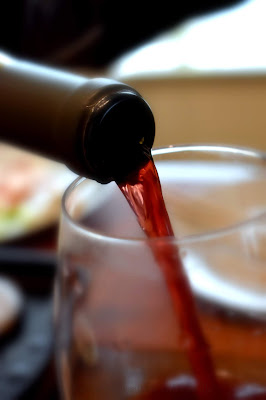 Donkey & Goat's 2017 The Bear is a multi-varietal blend from the Fenaughty & Lightner vineyards at 2800’ elevation in the El Dorado appellation. On the nose, we got strong perfume of summer berries. Think sun-kissed olallieberries and strawberries. But on the tongue, that sweetness was almost unnoticeable. Spice notes were prevalent, but it was the wine's bracing acidity that made this a homerun with the pork belly. That same tannic mouthfeel you get from a strongly brewed black tea complemented and cut through the pork belly fat beautifully.

*Disclosure: I received complimentary product for the purpose of recipe development.
This is a sponsored post that contains affiliate links. Although this post is sponsored, all opinions are my own.*