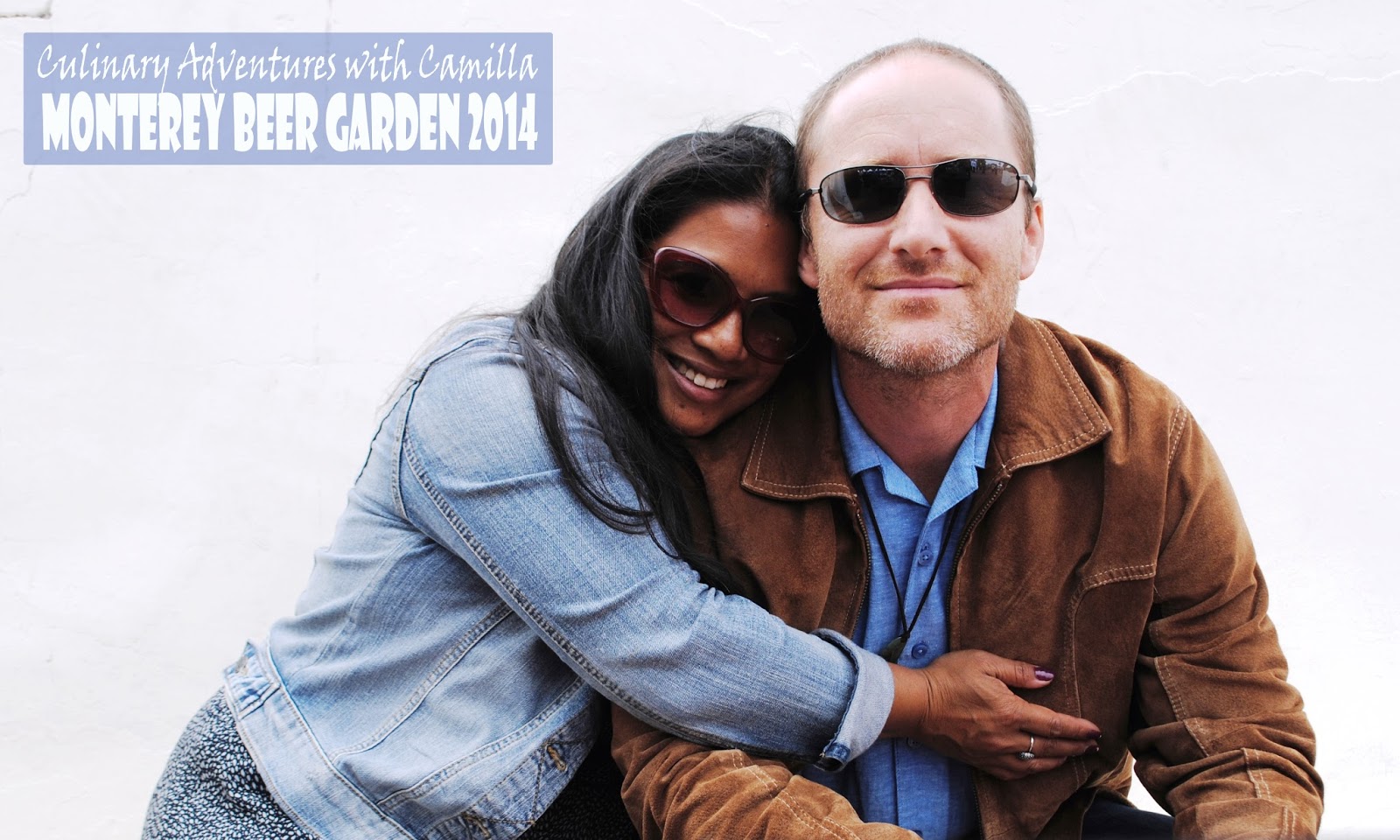 Having won the #peterbsbrewsandbitescontest with my Legend of Laguna IPA-braised Carnitas over Polenta Cakes, I received 2 tickets to the 2014 Monterey Beer Garden, a night at Portola Hotel & Spa, and a growlette from Peter B's Brewpub. And thanks to a tag-team effort by my parents and the Novaks, we were kid-free for the beer garden portion of the day. Ulla offered to keep the boys all night, but I knew that I would not be forgiven for staying at a hotel without them...when it's not a birthday or anniversary celebration. But we thoroughly enjoyed our kid-free date to drink beer!

We've been to a couple of other beer festivals and I have to say that this was the nicest one we've attended. The two main reasons: (1) it features truly local (at least Bay Area-local) breweries and (2) the crowd is comprised of actual beer enthusiasts. While people can drink as much beer as they desire within those four hours, I think attendees were there to really enjoy the beers and not just for the buzz! I was pleasantly surprised on both counts.

Now for some tasting notes (clockwise from the top left)... 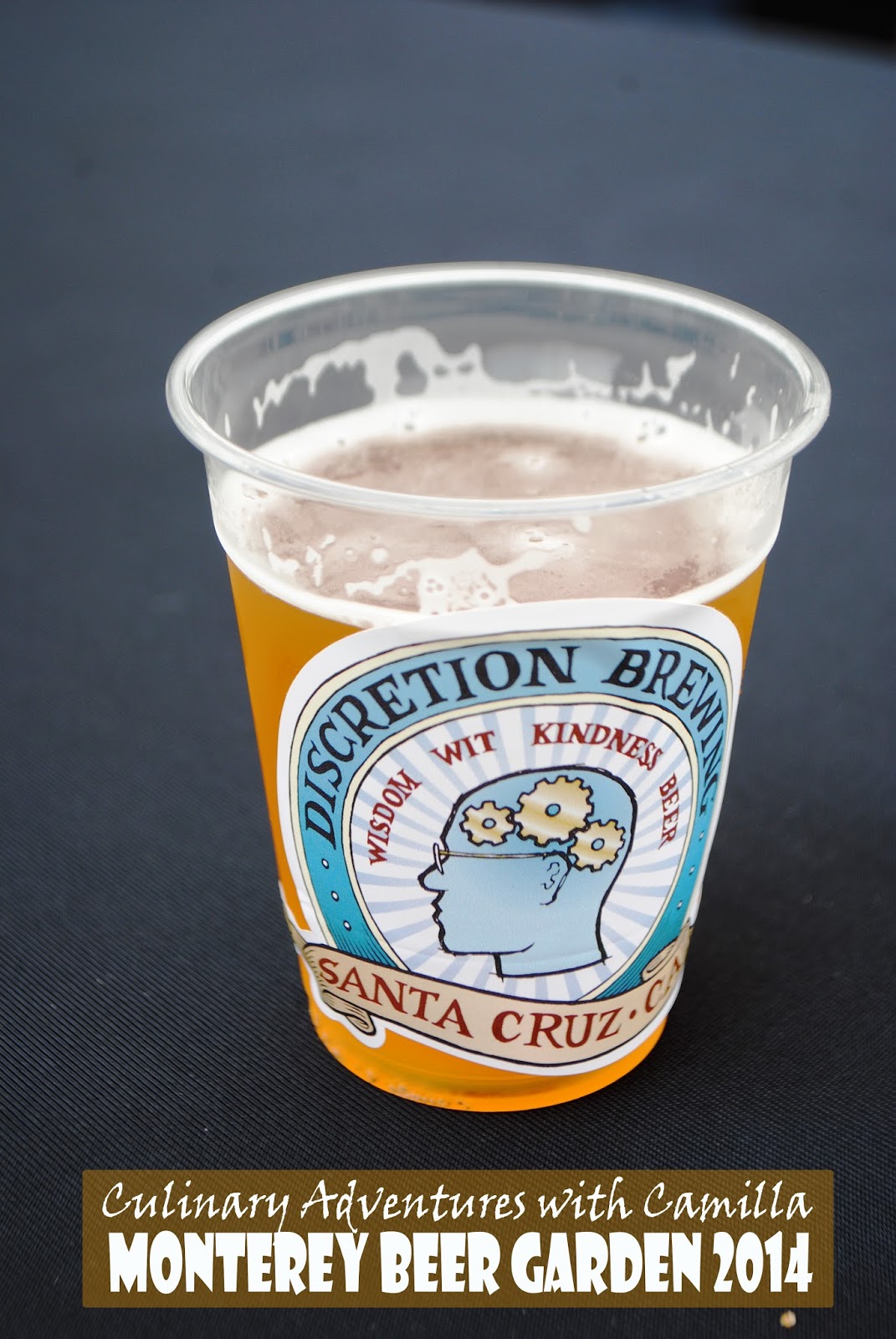 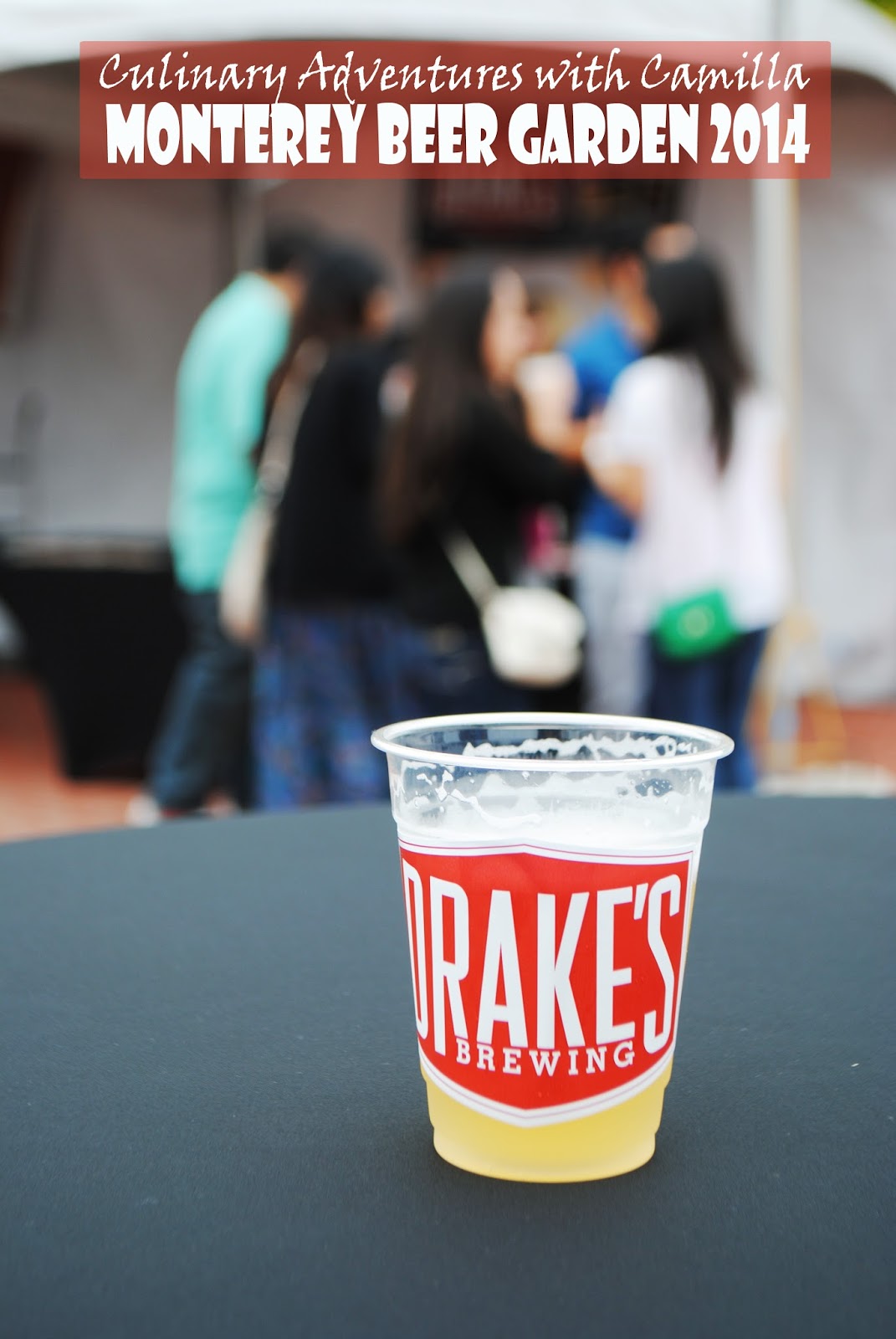 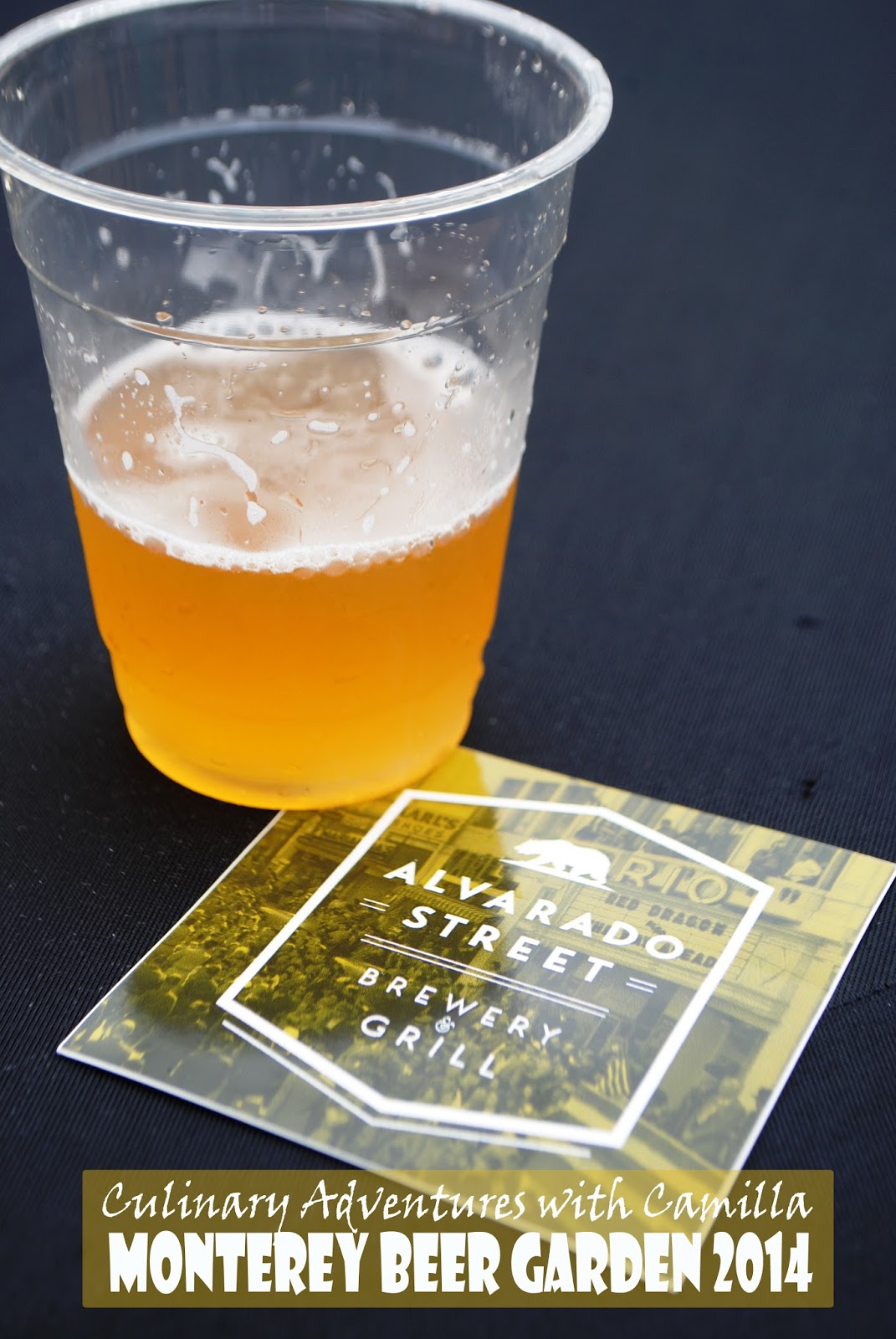 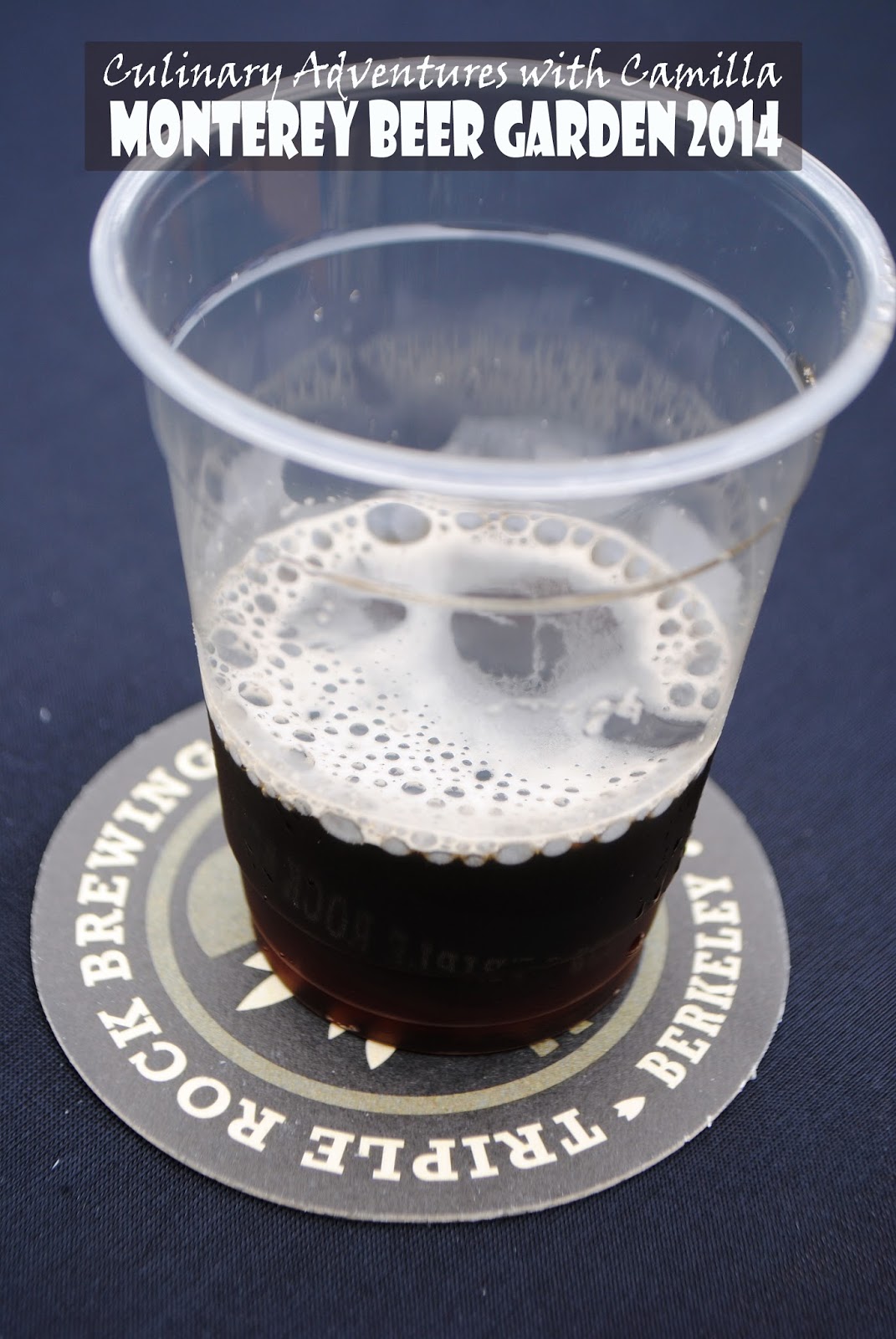 Urmahlullu by Discretion Brewing, Soquel
This beer actually got Jake's vote for 'best of show.' The urmahlullu is a mythological hybrid of lion and man. I asked. Urmahlullu, like its namesake, is also a hybrid - of ale and lager. Unfiltered and with only 3.6% abv, it's an easy drinking brew with a hint of coriander and some toasted malt. One oddity: after a hoppy beer, urmahlullu almost has a peanut-y taste. It was intriguing to say the least.

Session Saison by Drake's Brewing, San Leandro
I've been enamored with saisons since I did my beer crawl with the Beer Geeks. (Click to read Roadside Diaries: Beer People.) This one was, as expected, crisp, spicy, and refreshing.

Black Rock Porter by Triple Rock Brewery, Berkeley
This is one of their standard ales and one I've tried many times before. It's a robust ale that light on the hops and heavy on the coffee notes.

Grapefruit IPA by Alvarado Street Brewery, Monterey
Brewer and owner J.C. was pouring. And he said that this was a collaboration with Peter B's Brewpub. Nice! Two local favorites. While I am normally not a huge IPA fan - I am going to devote an entire post to that! - this was beautifully balanced. It seemed light on the hops and heavy on the grapefruit. A tasty brew. I wasn't too surprised. The only other IPA I've ever liked was also a Peter B's creation. 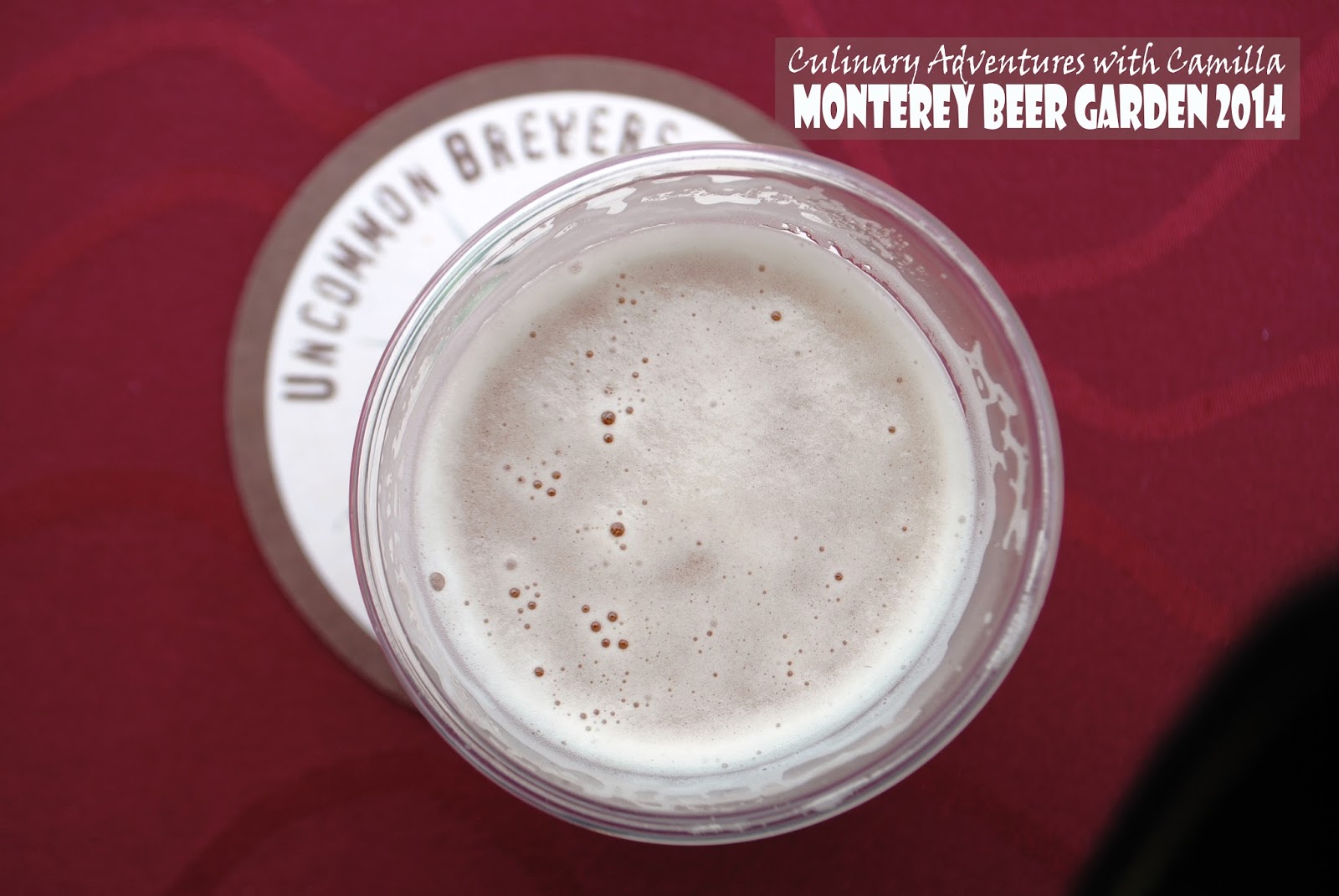 We tried some fruity brews. First up: Framboos by Uncommon Brewers, Santa Cruz. This is a crisp blonde ale brewed with fresh raspberries. It was incredibly aromatic and super delicious. 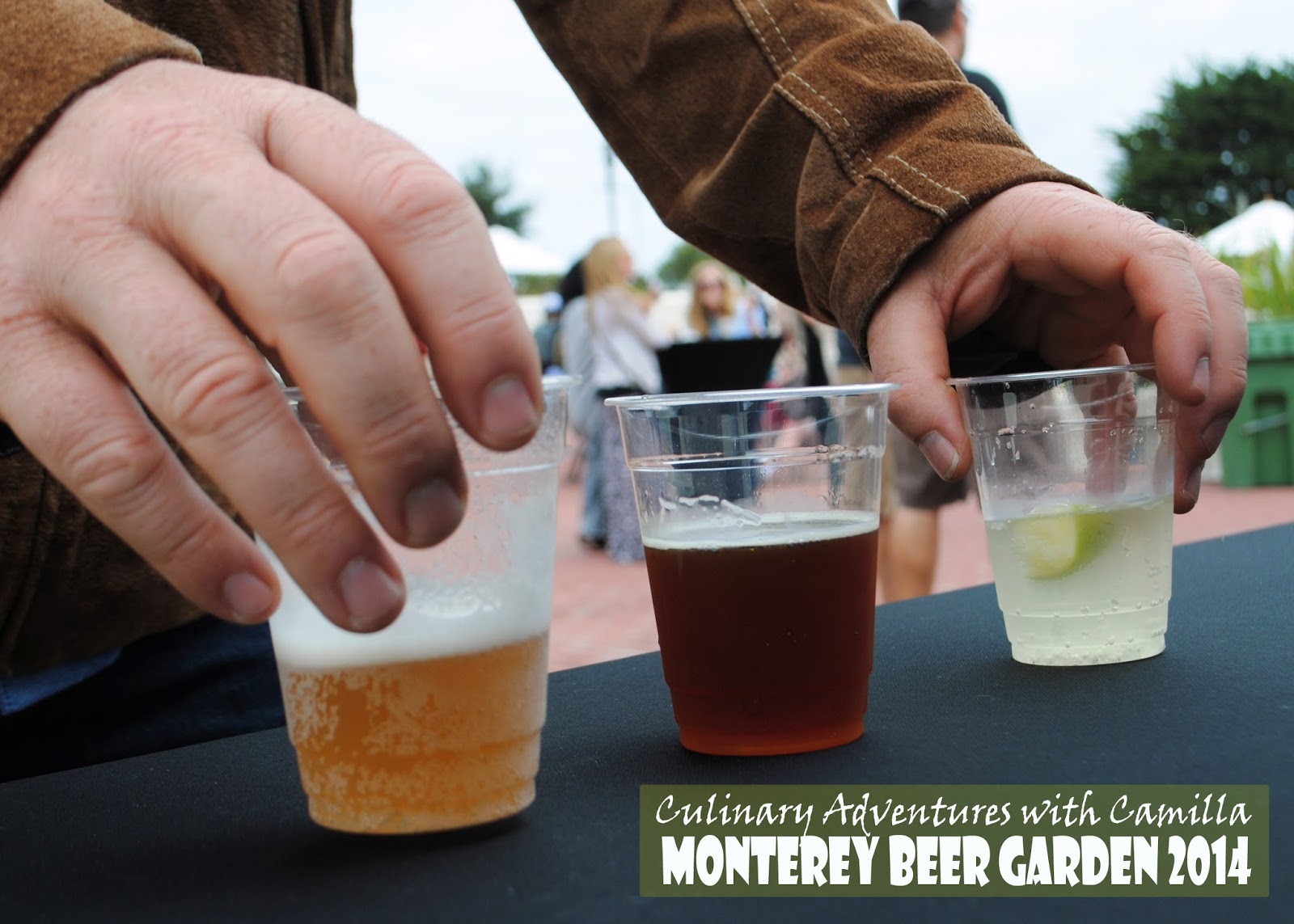 This was an unusual trifecta from Boulder Creek Brewing, including their Ginger Beer and their Mango Sour. While I liked the ginger beer, I wished it had more ginger. It was a little too understated. Also, while the freshly squeezed lime was a nice touch, it made me feel that I wasn't tasting the beer itself.

But beer that we actually finished - and went back for more - was the Mango Sour. This was the strangest taste sensation I've ever experienced in a beer. At first sip, like a sour should, it made your mouth pucker. As it leaves your mouth, you get a distinct, unbelievable flavor of - wait for it! - expensive charcuterie. Think fennel seeds and a slightly oily mouthfeel. Yes, it was completely weird, but oddly appealing. 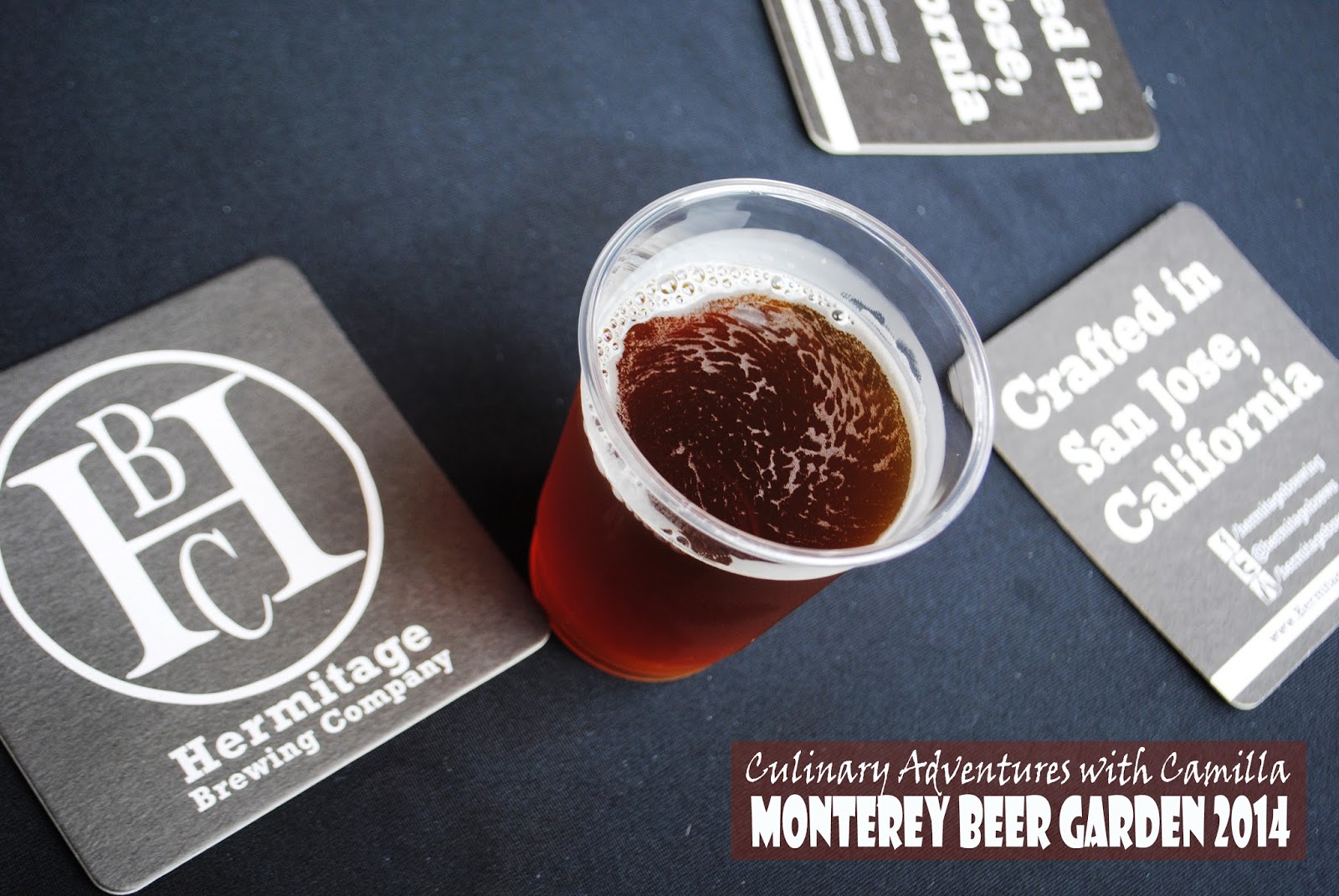 Hermitage Brewing Company, out of San Jose, brought their Fruit Crate Pumpkin Ale. It was not what I anticipated at all. When I drink pumpkin ale, I expect - and really want - those distinctive spices: clove, cinnamon, and more. This shockingly had none of that. While it was brewed with a gob of pumpkin, it was not what I want when I pick up a pumpkin ale.

Last I want to shine the spotlight on Firestone Walker Brewing Company's Opal. Saving the best for last, so to speak. 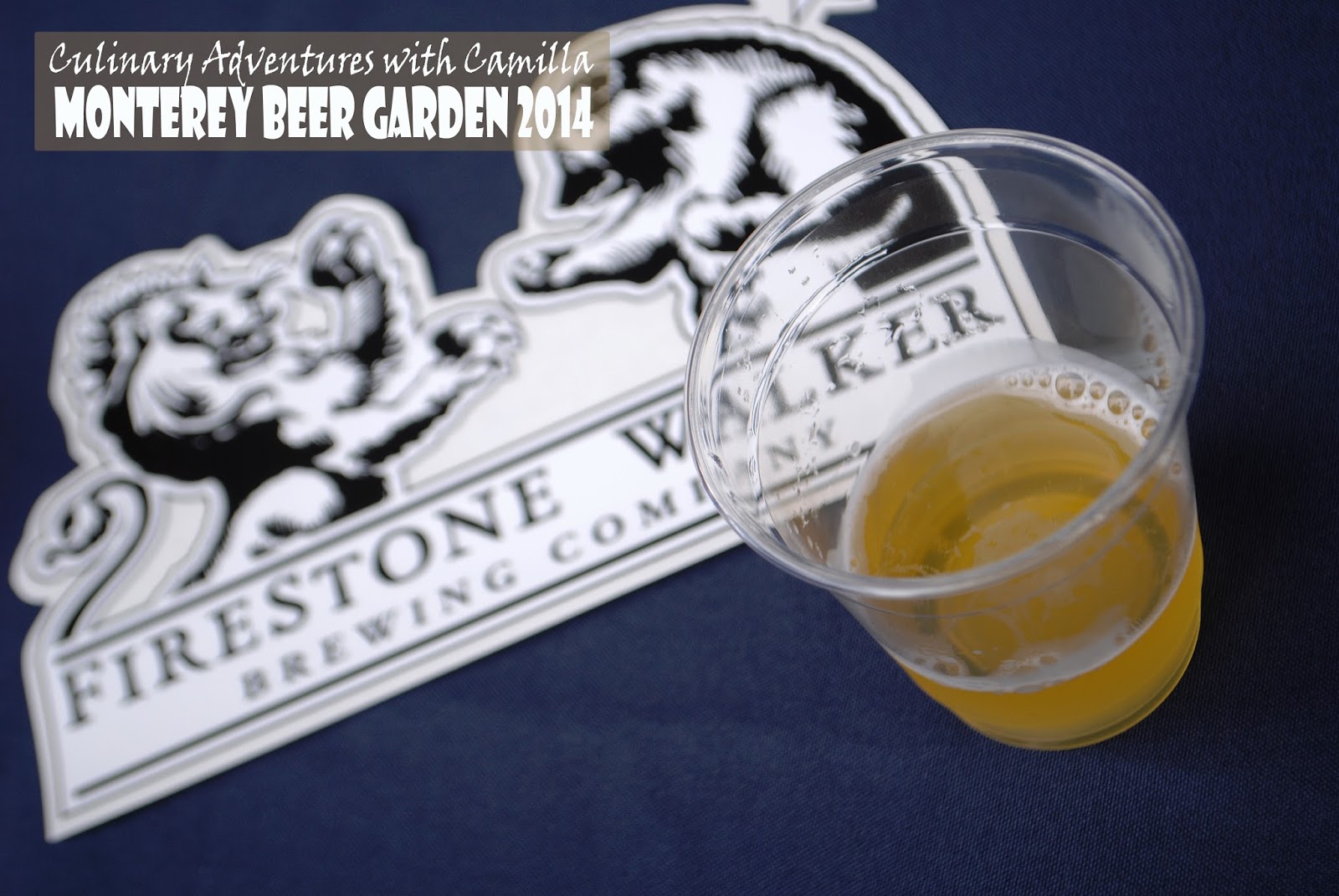 Their Opal is a saison-style that is a beer for a wine drinker. It reminded me of a thoroughly enjoyable Pinot Grigio with some pepper, some citrus, and some peach. Spicy, zesty, and sweet. It was tart and refreshing and - while it was a tough field - it got my vote for 'best of show.' 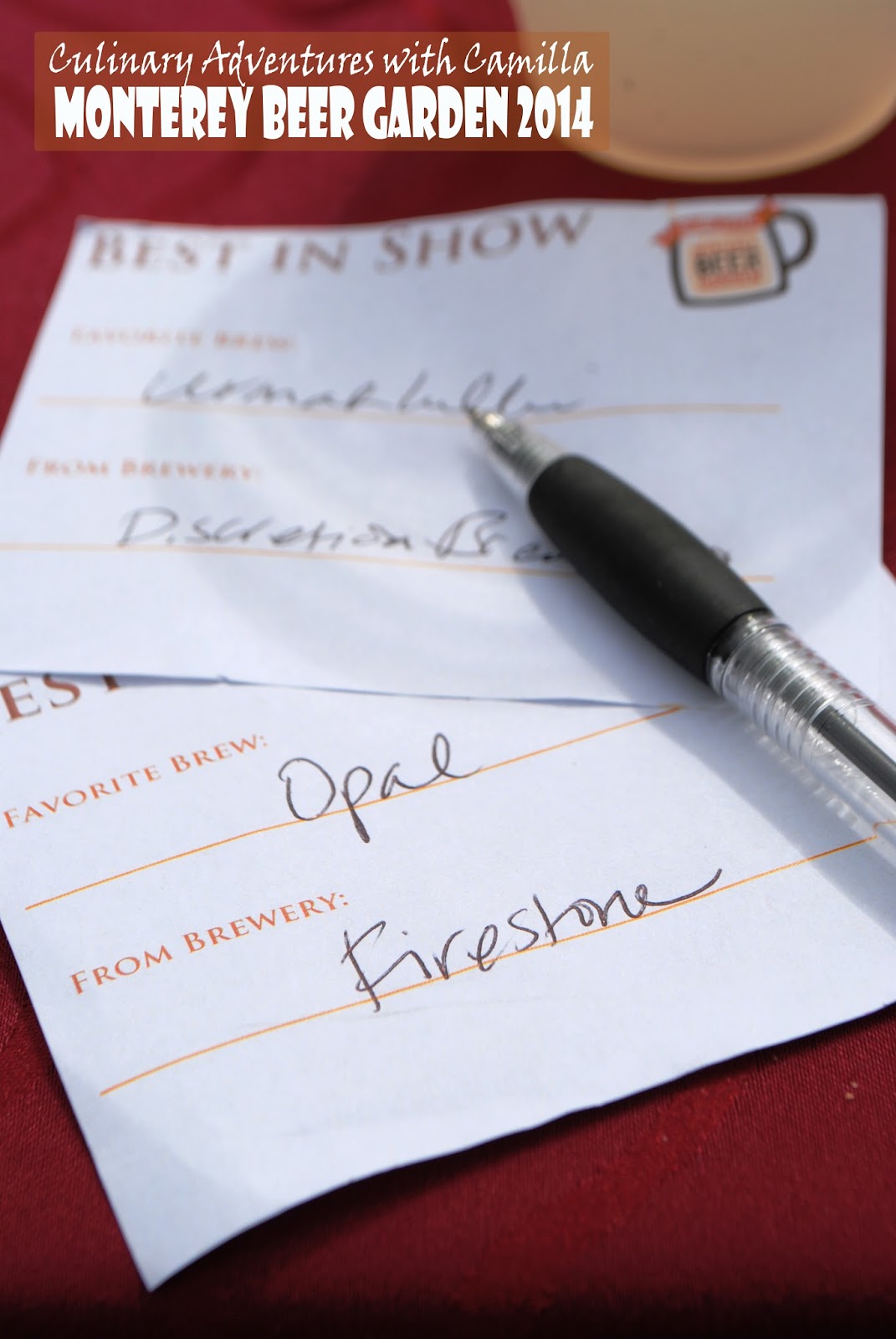 Did you try any good beers this weekend?