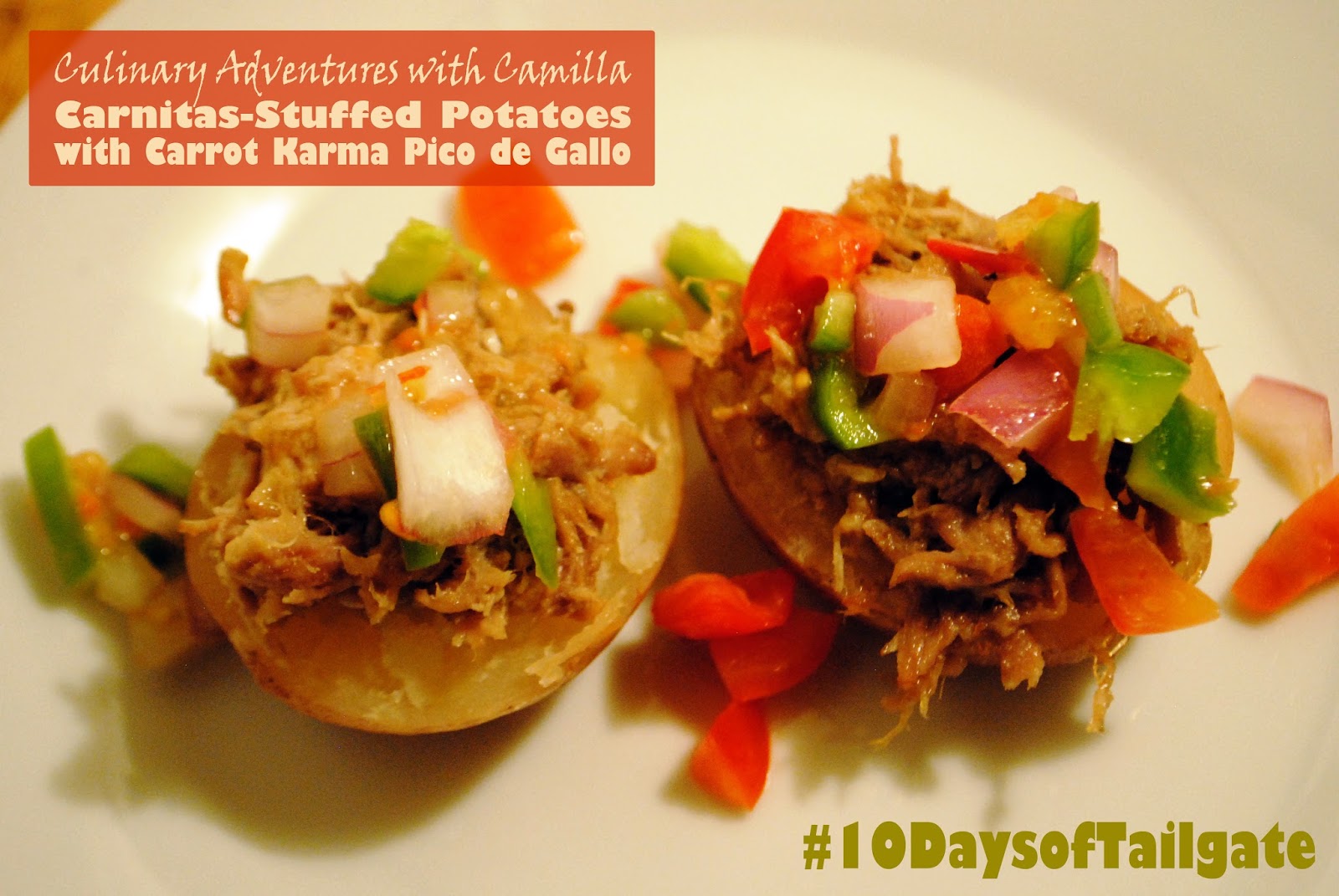 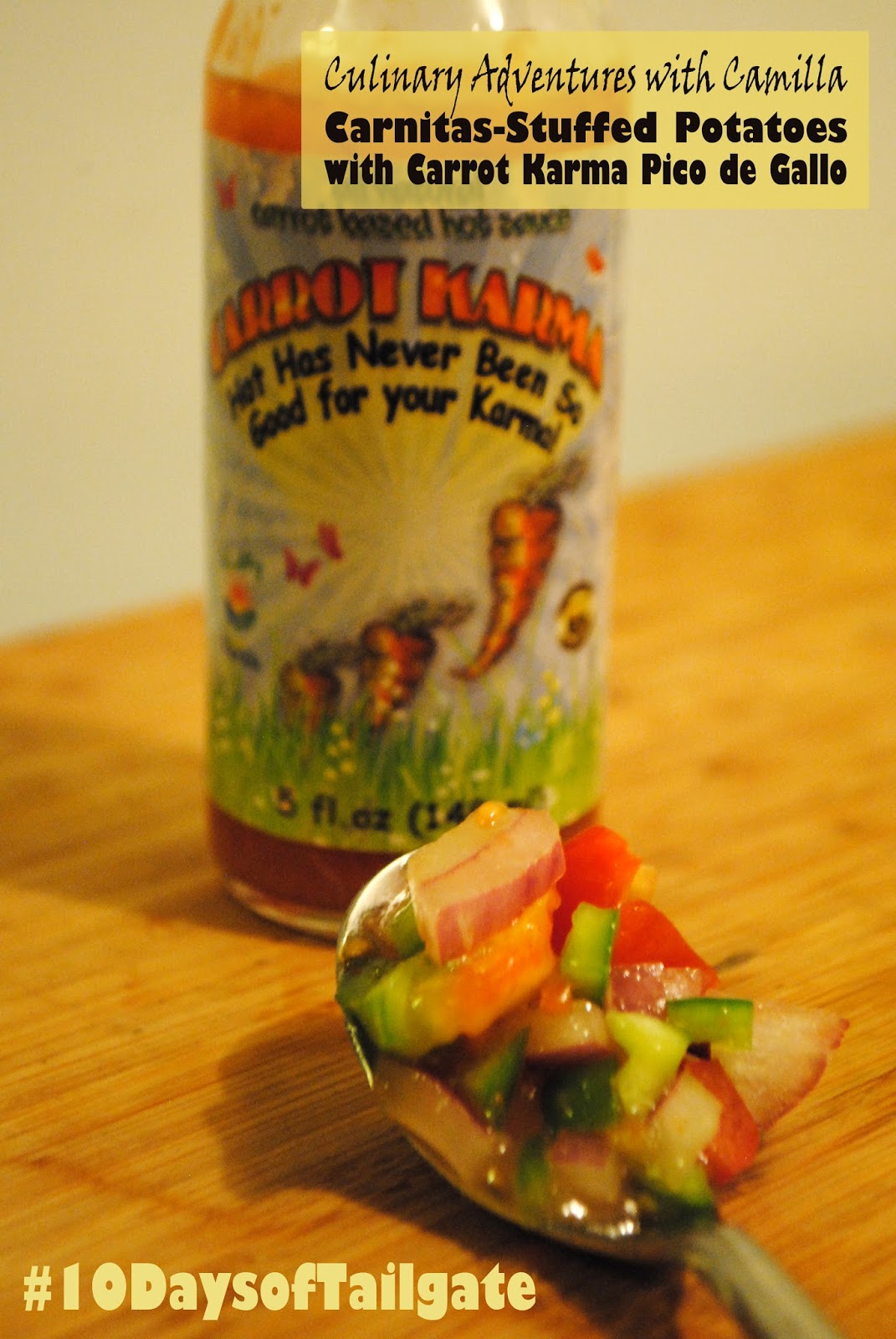 It's not a party without some carnitas. I recently won a recipe contest with my Legend of Laguna Carnitas over Pan-Fried Polenta Cakes. And - though I won - one of the comments made by a judge stuck with me: "It's not really carnitas because she didn't make it with lard."

While I quelled my gag reflex - lard!?!? - I did start to think about what the lard would do and how it would change my dish. I was thinking that bits might crisp in lard and figured that I could achieve the same effect with butter.

So, as a riff on ubiquitous tailgate baked potato skins, I made Carnitas-Stuffed Potatoes with a Carrot Karma* pico de gallo, using Carrot Karma Hot Sauce by Intensity Academy - one of  our #10DaysofTailgate sponsors. The sauce added a slightly sweet, subtle heat to my fresh salsa. 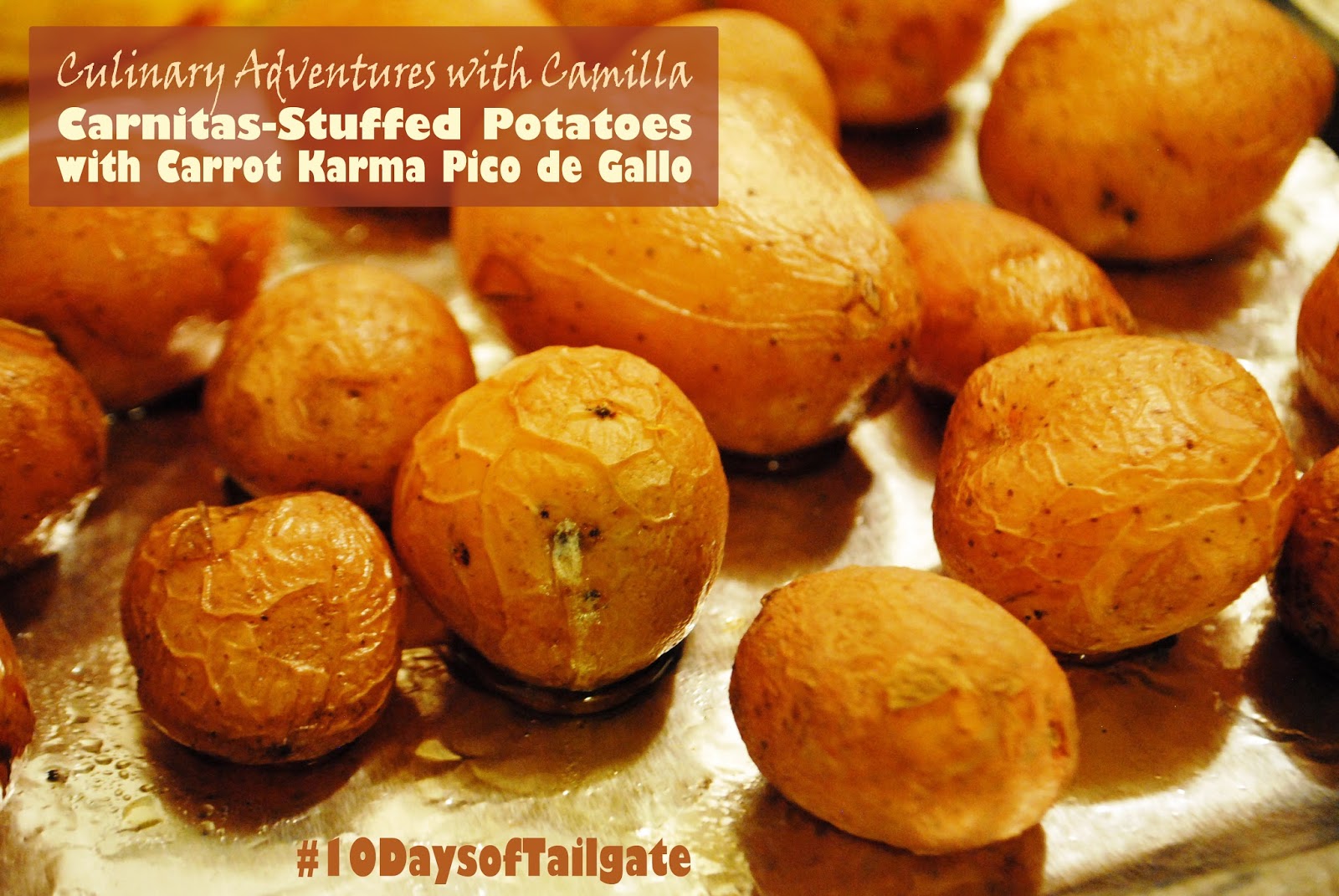 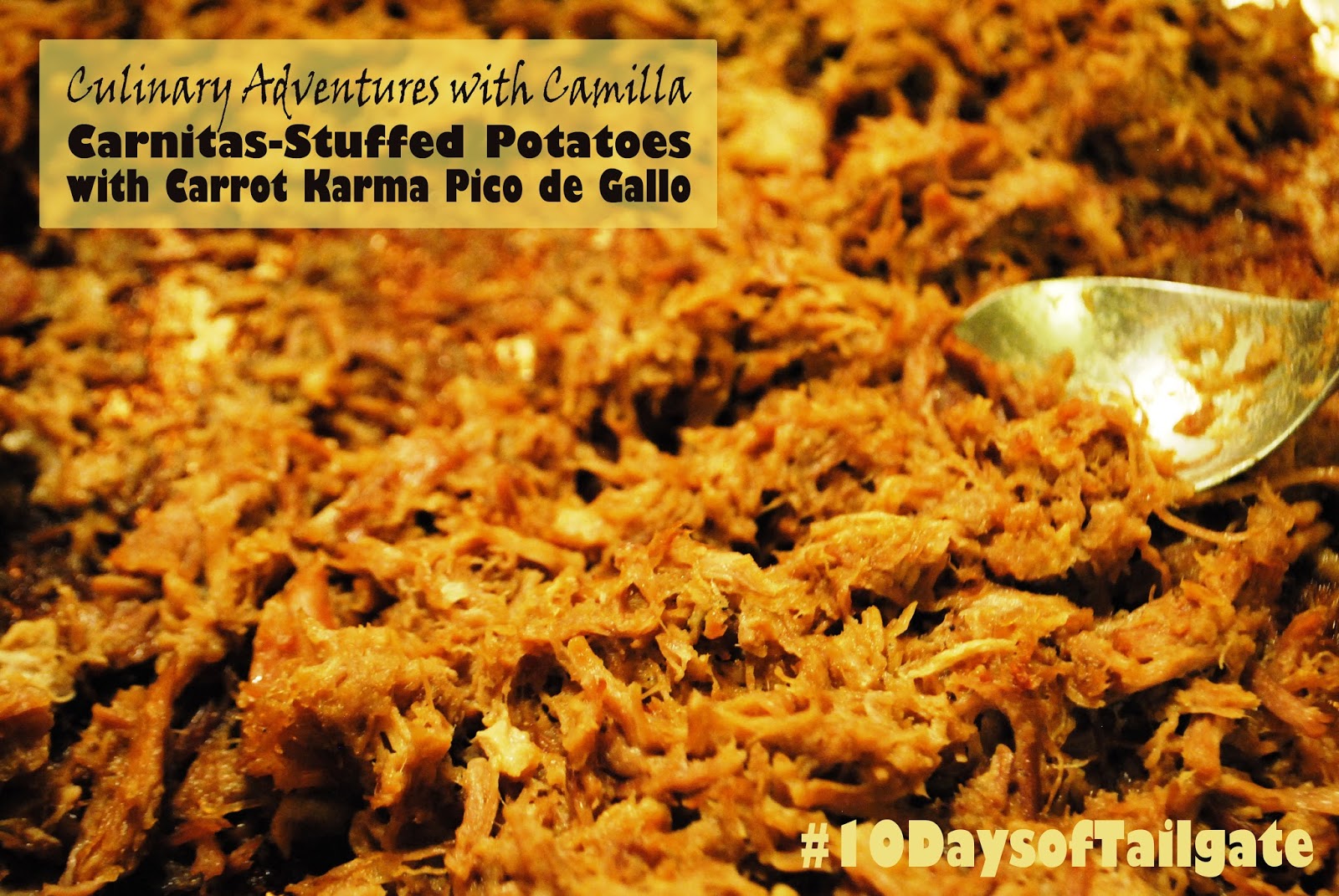 Bring all of the ingredients - except salt, pepper, and butter - to a boil in a large, flat-bottom pot. Reduce heat, cover, and simmer, stirring occasionally, until pork is fork-tender, approximately an hour. Uncover pork; simmer until liquid evaporates and pork begins to brown, approximately half an hour. Continue to cook, for another 10 minutes, until the pork is nicely browned. Shred pork with a fork. To get that nice lard-crisp, before serving I quickly browned the carnitas in butter until crisped bits formed. 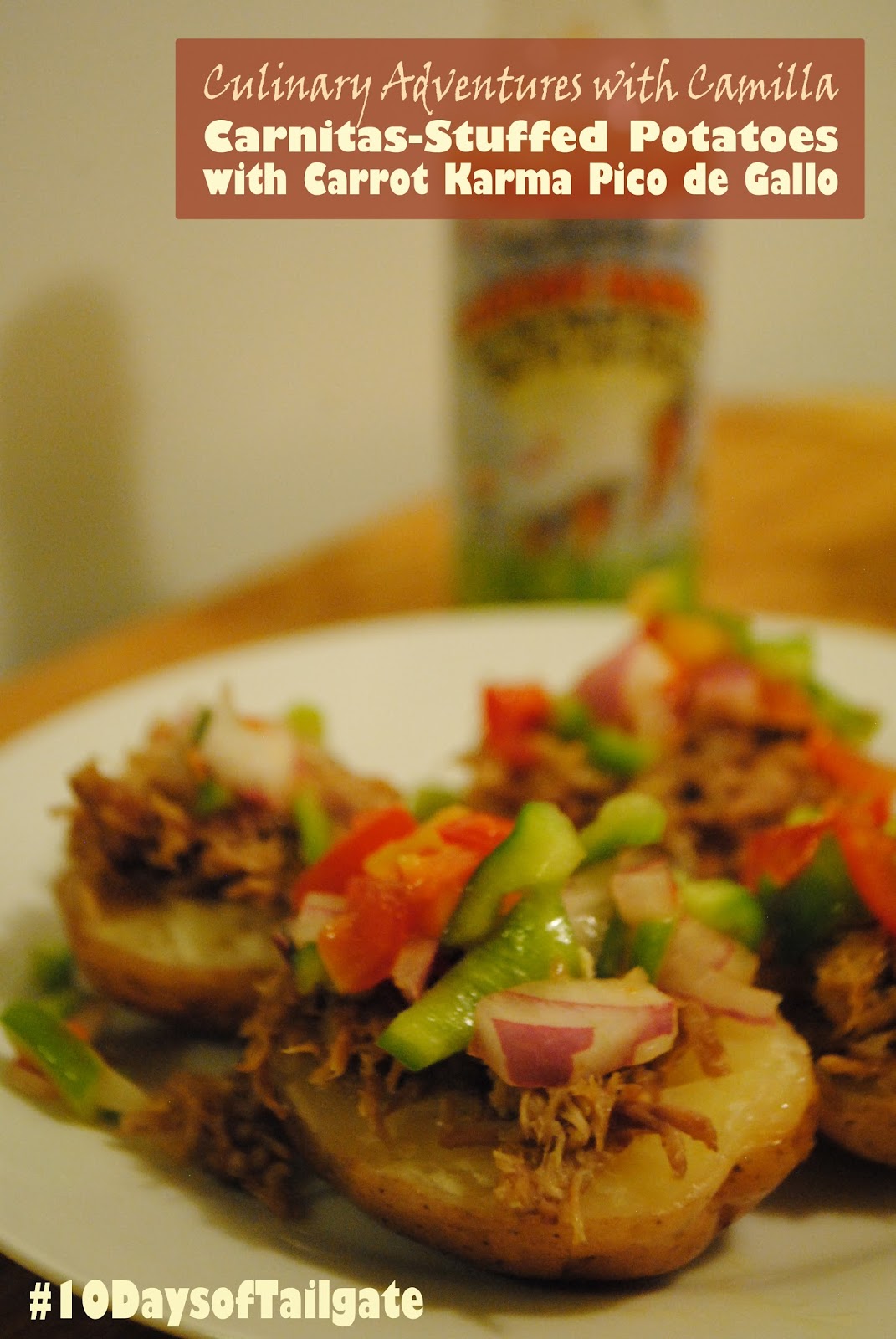 Preheat oven to 350 degrees F. Place potatoes on a foil-lined baking sheets. Drizzle them with olive oil. Roast until they can be easily pierced with a fork. Mine took almost an hour. Let cool till you can handle them. Slice them in half and place on a platter.

Pico de Gallo
Place all of the ingredients - except for the salt and pepper - in a small mixing bowl. Blend gently and let stand for 15 minutes to blend flavors. To make this more spicy, add hotter peppers such as a habanero or jalapeno or use more hot sauce. Serve at room temperature. This salsa stays fresh for up to 3 hours. If you refrigerate it, use quickly because it will begin to ferment.

To assemble...
Gently press the potato halves to create a small hollow in each side. Spoon the carnitas into the potatoes. Top with pico de gallo. Serve immediately.

Here's what the rest of the crew brought to the table...

Click to go to the sponsor info and enter THE giveaway! 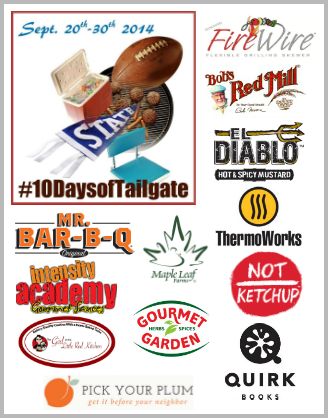 Thanks again Intensity Academy* - just one of the #10DaysofTailgate sponsors -
for ingredients used in this recipe.

*Full Disclosure: I received 1 complimentary bottle of Carrot Karma Hot Sauce by Intensity Academy for participating in #10DaysofTailgate. Feel free to use whatever hot sauce you have on-hand. All comments are 100 % accurate and 100% my own.