By Camilla M. Mann August 25, 2013
Before I start this post, I want to say that I made a HUGE mess. It was a gigantic, sticky, tasty mess. I had good intentions and my components were all perfect. But, when I tried to put them all together...let's just say, 'ugly' would be a generous description. I originally titled this post 'Gingo-Mars' but after I made them, they became Mess-omars. 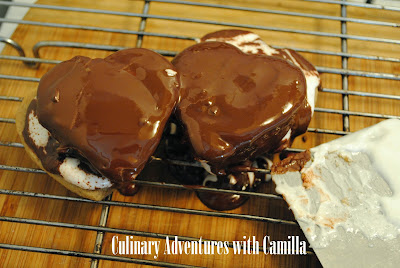 Caroline from Caroline Makes is hosting Food'N'Flix this month. And her pick - When Harry Met Sally - is one I've probably seen fifty times. No exaggeration. Maybe more. When I was in high school, my best friend, Jenn, and I would make apple pies on Friday evenings and watch it ad nauseum; we were real party-girls, can't you tell?!? Click here to see Caroline's invitation to her movie selection.

Please, forgive the long, long, Dostoyevsky-long post. This is one of my favorite movies of all time! So, one night, I pulled out my DVD and Jake and I watched it again. I had a notepad and pen in hand. And amid laughter, I jotted down these possibilities...

Apple Pie A La Mode: (Sally) I'll have the chef salad please, with the oil and vinegar on the side and the apple pie a la mode. But I don't want the ice cream on top, I want it on the side, and I'd like strawberry instead of vanilla if you have it, if not then no ice cream, just whipped cream, but only if it's real, if its out the can then nothing. 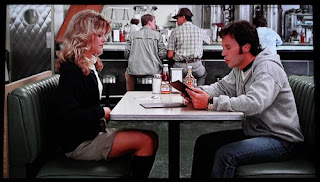 Bloody Mary: (Sally) Do you have any Bloody Mary mix? (Stewardess )Yes. (Sally) No, wait. Here's what I want. Regular tomato juice, filled about three quarters, and add a splash of Bloody Mary mix, just a splash, and...a little piece of lime, but on the side. 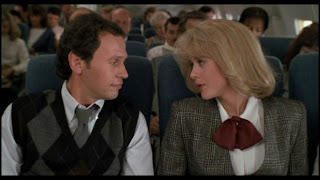 [Here's my Bloody Orange Mary from our End of Days dinner on December 21, 2012. All I can say is: the Mayans were wrong. Thank goodness.]

Parikash and Pecan Pie: (Harry) For the rest of the afternoon, we are going to talk like dis. Waiter, there is too much pepper in my paprikash. ...But I would be proud to partake of your pecan pie. 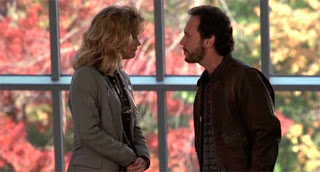 Ethiopian: (Harry) It started out fine, she's a very nice person, and we're sitting and we're talking at this Ethiopian restaurant that she wanted to go to. And I was making jokes, you know like, "Hey I didn't know that they had food in Ethiopia? This will be a quick meal. I'll order two empty plates and we can leave." 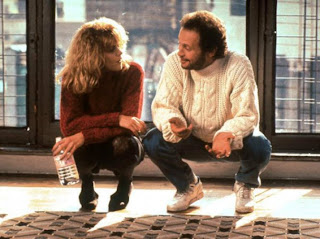 [We did cook an Ethiopian meal during our Cooking Around the World Adventure.]

Deli Sandwiches: (Sandwich shop patron) I'll have what she's having. If you don't know what this refers to, rent the movie and watch it. Seriously. You won't regret it. 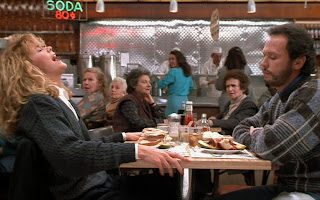 Pesto: (Marie) 'Restaurants are to people in the 80s what theater was to people in the 60s.' I read that in a magazine. (Jess) I wrote that. (Marie) Get out of here. (Jess) No, I did. I wrote that. (Marie) I've never quoted anything from a magazine in my life! That's amazing. Don't you think it's amazing? And you wrote it? (Jess) I also wrote 'Pesto is the quiche of the 80s.' 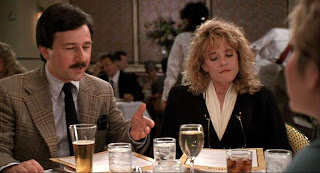 [Here's my twist on pesto, it's made with a weed - Dandelion Pesto.]

Coconut Cake with Chocolate Sauce on the Side: (Harry) We had this enormous coconut cake. (Sally) Huge coconut cake with a - with a - tiers and there was this very rich chocolate sauce on the side. (Harry) Right, cause not everybody likes it on the cake, cause it makes it very soggy. 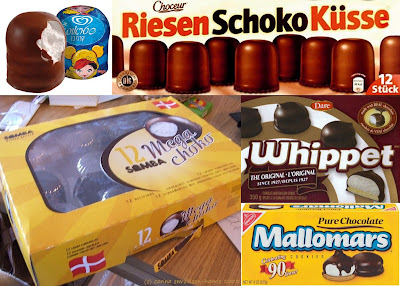 But, in the end, Jake voted for a version of Mallomars - "You got Mallomars, the greatest cookie of all time." Besides the movie, I have never heard of a mallomar...much less seen one. But, apparently, these cookies are found around the world. They are called Whippets in Canada, Krembos in Israel, Flodebolle in Denmark, Tunnock’s Teacakes in the United Kingdom, Zefir in Russian-speaking countries, Schokokuss in Germany, and Mallowpuffs in New Zealand.

Camilla's Ging-omars
So, I took the challenge, but had to do some searching. I found this version of a Homemade Mallomar Bar from Serious Eats; but I settled on using this one from Leite's Culinaria as my starting point, infusing mine with ginger and other fun spices. And, as I said in the beginning, my creation was a bit of a disaster. But all of the parts, separately, were good. 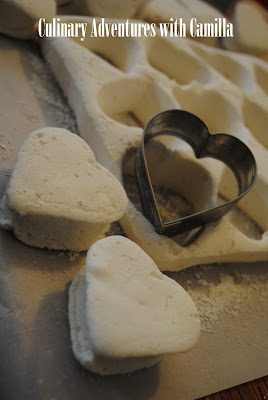 Prepare a 9×13 inch pan by oiling it with or butter. Dust powdered sugar over the oiled sides of the pan. Place 1/2 C of water in a large mixing bowl. Sprinkle gelatin over water and allow to soften, 5 minutes.

Place remaining water, sugar, syrups, and salt into a large saucepan. Melt all of the ingredients together, without stirring, and bring to a boil. Boil until the syrup reaches 240 F on a candy thermometer. 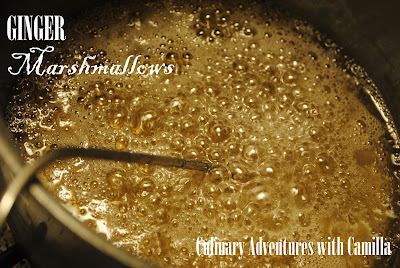 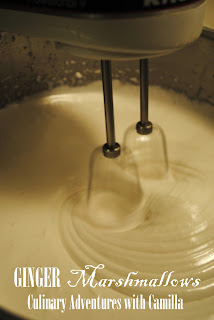 With the mixer on low speed, slowly pour hot syrup down the side of the bowl, being sure to avoid the whisk as it will splatter the syrup and could possibly burn you. Once all of the syrup is incorporated gradually increase mixer speed and whip on high until the mixture turns white and become very thick and stiff. Beat for another two minutes. Then, spread the marshmallow into the prepared pan and with wet hands, smooth the top.

Dust liberally with powdered sugar and allow to set at room temperature for at least 4 hours or overnight, if possible. Once they are set, cut them, roll them in more powdered sugar. 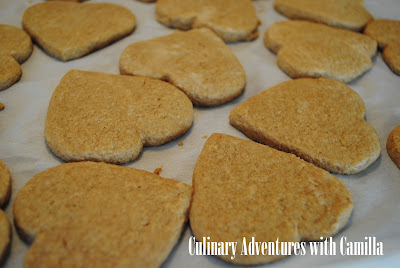 Lightly flour the work surface. Roll the dough to a 1/4-inch thickness - between two pieces of parchment - and cut out the crackers; I used a heart cookie cutter. Transfer the parchment paper to a cookie sheet and place in the freezer until ready to bake.

Preheat the oven to 350°F (175°C). Transfer the pans of graham crackers from the freezer to the oven and bake for 14-18 minutes, or until the crackers are dry to the touch but still have a tiny bit of spring to them. Do not bake until crisp. The crackers’ color will barely change. Place the pans on wire racks and immediately, while the crackers are still warm, place a marshmallow on top of each cracker. The heat of the cracker will cause the marshmallow to stick the cookie, which is essential for the following chocolate-dipping step. Cool completely on the pans set on racks.


Chocolate Topping - Melt the chocolate in the top of a double boiler over simmering water. I used Ghirardelli (60%) chocolate chips. 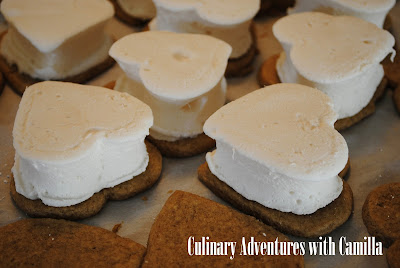 Then this...I didn't have a chance to cool them. They began to ooze immediately. So I topped them with another cracker and just drizzled the chocolate all over. 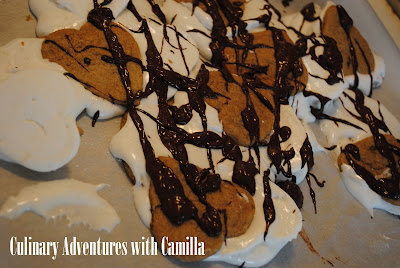 The boys happily devoured my ugly mess. Next month, This Mama Cooks! is hosting. We'll be watching, or re-watching as the case may be, Toast. Hope you'll join the fun.