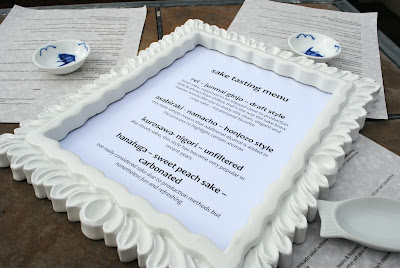 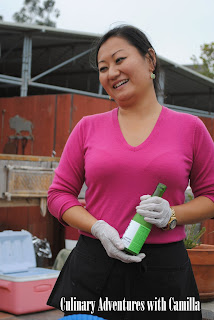 One of my best friends out-bid me at an auction for an Ocean Sushi Deli Sake and Sushi Tasting Experience by Shiho Fukushima. I was bummed. I've known Shiho for years, frequent her restaurant, marvel at her culinary passion, follow her freelance pieces in the Monterey County Weekly, and really wanted to take part in the tasting.

Little did I know that Jenn just out-bid me for the fun of it...she planned to include us in the fun. I hoped that was the case, but I didn't want to be presumptuous; she has plenty of friends who would be thrilled to partake. But I have to admit, I was more than a little excited when she told us the date and time. Phew.

Simply, sake is a Japanese alcoholic beverage made with fermented rice. But sake can be divided into categories by how it was brewed. 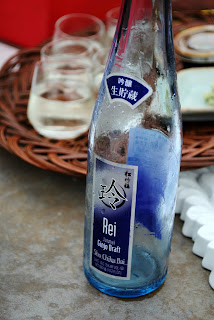 The first one we tried was Rei by Sho Chiku Bai, Takara Sake's main brand. Rei is a Junmai Ginjo Nama /Ginjo Draft. Junmai means "pure rice" and is a sake composed of only rice, water, koji and sake yeast. No other ingredients or additives, such as alcohol or sugar, are added. I think this was my personal favorite.

The second pour was Honjozo Namachozo by Asabiraki. Honjozo-style means that additional alcohol is added to the sake to highlight certain aromas though added alcohol cannnot exceed 25% of the total alcohol in the finished product. In the U.S. it is not legal to make Honjozo or to add alcohol to sake. Imported Honjozo is categorized as a distilled spirit.

Third on the list was Kurosawa Nigori by Nishimoto Sake. Nigori -"cloudy"- sake is unfiltered and has a milky white appearance. It was markedly sweeter than the others...a little too sweet for my taste. 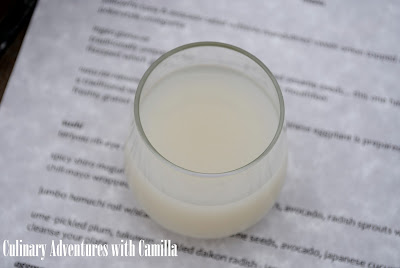 The final tasting was not a true sake, but Jenn and I loved it. Shiho's final selection for us was Hana Fuga, a sparkling sake, by Ozeki Sake. It was fruity and playful.

So much fun. And I learned a lot, too. I'll be writing about incredible eats that Shiho prepared for us; they deserve their own post! For now...kampai! 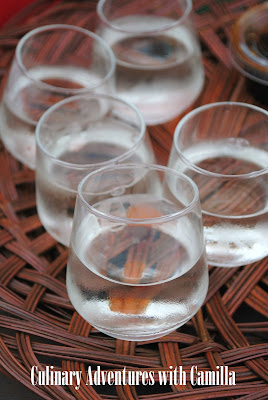