By Camilla M. Mann August 21, 2013
We haven't ventured very far from our previous country which is directly north of this one. Though both nations - Niger and Nigeria - take their names from the Niger River, which flows through both countries, there are some marked differences.

Niger is about a third larger than Nigeria. While Nigeria is the most populous country in Africa with approximately 85 million people, On the flip-side, Niger has a population of just 5 million and is one of the least densely populated countries on the globe. French is the official language of Niger; English is the official language of Nigeria. A majority of people in Niger are Muslim, while over a third of Nigerians are Christian. Nigeria is largely fertile and forested, with many rivers and a long coastline; Niger is predominantly desert and is completely landlocked. By the way, a person from Niger is a Nigerien, while a person from Nigeria is a Nigerian.


Here are some fun facts...


While researching recipes for our Cooking Around the World Adventure to Nigeria, I kept seeing the same name over and over again: Jollof. Though this recipe actually originated from rice dishes eaten by the Wolof people of Senegal and Gambia, Nigerians have adopted it as a national favorite. Based on rice, tomatoes and usually meat or fish, it is believed by some to be the origin of Cajun jambalaya. You will also find it spelled 'jolof' or 'djolof' rice. We have eaten something similar when we cooked Guinea Fowl Paella from Equatorial Guinea. But this is the Nigerian version...and I love that I get to use the green beans from my friend Marne's garden. Thanks for the delivery! 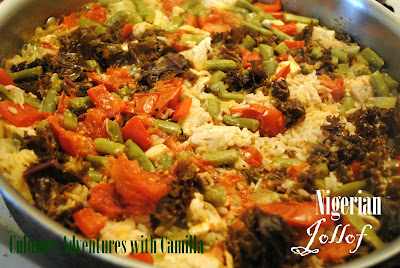 These Global Table Ambassadors are signing off for now. We're headed to Norway next. Looks as if Dylan will get his wish. Tonight he bemoaned, "Mom, are we going to get to a country that has seafood soon?" Yes!