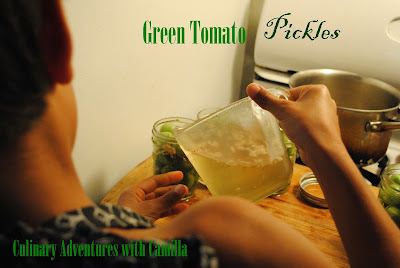 Yesterday I picked up my kids - from my parents' house - and Enthusiastic Kitchen Elf had a box full of green cherry tomatoes and pockets full of pears. Mom, he gushed, I want to make pickled tomatoes and pear jam tonight!

Well, we were busy last night, so I stalled him. But his enthusiasm hasn't waned, so tonight is the night. First up: pickled green tomatoes from my parents' friend's garden. I found several different version of this recipe and melded a few together for my own batch. I accidentally forgot to add in a few tablespoons of sugar, but I found several pickle recipes without sugar. So, I didn't fret too much. 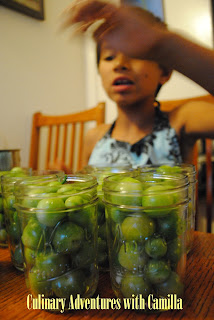 Bring water, vinegar, and salt to boil in a non-reactive saucepan. Boil for 5 minutes. In the meantime, poke a hole with a toothpick or skewer in each of the cherry tomatoes so that the brine can penetrate the thick skin.

In the sterilized jars, place half a garlic clove, 1 bay leaf, and a pinch of coriander seeds. Pack in the tomatoes tightly to within 1/2" of the top.

Pour boiling brine over the tops of the tomatoes. Wipe rims, position lid over the top and screw rings on just until they hold tightly. 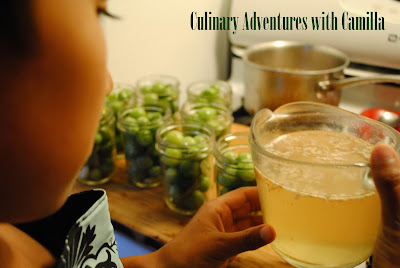 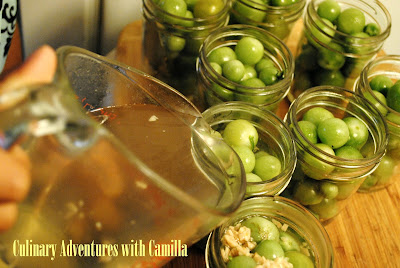 Place jars in a large pot and fill with water to cover jars.  Cover the pot and place pan over high heat.  Allow water to come to a rolling boil, leave lid on, and boil hard for 15 minutes. 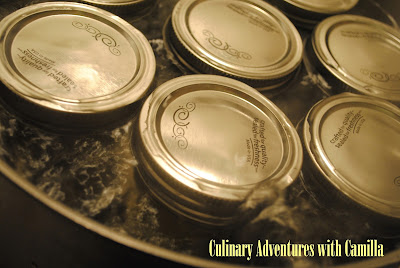 When the 15 minutes are up, shut off heat, remove lid and allow the jars to sit in the hot water for another 5 minutes.  Remove jars to a cooling rack and allow to cool, undisturbed. I heard mine seal within 5 minutes of being removed from the pot. But I left them alone overnight. 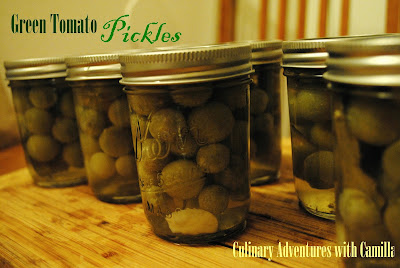 When jars and their contents are completely cooled, wipe down with a clean, damp cloth, remove rings and store in a cool, dry place.  The pickled cherry tomatoes will be ready to eat in 4 weeks. Can't wait...stay tuned for the tasting at the end of September.