By Camilla M. Mann August 31, 2013
Though I have been completely remiss in trying a new cheese every Friday as I had planned for this year - Formaggio Friday - yesterday I found one at Trader Joe's that caught my eye: Elderflower Tomme. So, I bought it and served it with stuffed olives, rustic baguette, and an unfiltered wheat beer with a slice of lemon. 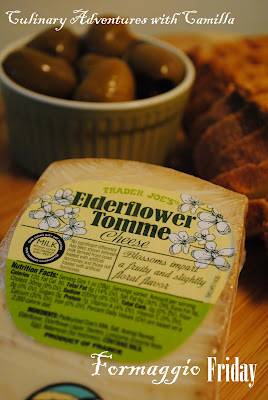 Tommes, the story goes, are made by alpine cow herders during the winter, when milk is scarce and the nutrient concentrations in the milk markedly different. These are the same herders who make Comté and Beaufort—rugged, elastic cheeses that are crafted in huge wheels durable enough to sustain long transport down the mountain.

Tommes were meant for the family versus something sold at market. As such the wheels are smaller than their summertime counterparts, they are aged for fewer months, and their interior is more creamy and fragile. Tommes tend to be grassy in flavor with an unctuous texture.

I can't say that we could really discern the elderflower specifically. But it was slightly more fruity than other tommes we've tried. And it was delicious!