Cooking Around the World: Niger

By Camilla M. Mann August 19, 2013
We're on to the Ns for our Cooking Around the World Adventure. Here we go with Niger - not to be confused with Nigeria...that's up next!

A few facts about Niger... 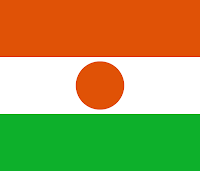 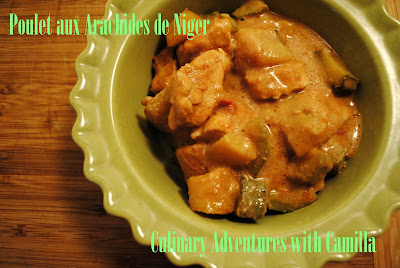 This is a traditional Nigerienne recipe for a classic stew of chicken pieces and onions in a tomato and peanut butter base with aubergines, potatoes and piri-piri chiles. Okay, I made some significant departures from the traditional recipe because I had some nice zucchini from a friend's garden - Thanks, Marne! - and some leftover rainbow carrots. Mine is more Poulet aux Arachides de Niger-inspired!

Heat a splash of olive oil in a pan. Add the chicken pieces and fry until until nicely browned all over. Add the leeks and cook until the leeks are translucent and browned. Stir in the tomatoes then add the zucchini and potatoes. Add in the water and peanut butter, stirring till the peanut butter is dissolved into the sauce. Season to taste with salt, black pepper, and the soy sauce. Bring to a simmer, cover the pot and cook gently for about 40 minutes, or until the chicken pieces are tender and cooked through. Serve hot with rice. Though the original is made spicy with piri-piri, Dylan isn't a huge fan of 'hot things'. So, I opted to serve red chili pepper flakes on the side.

These Global Table Ambassdors are signing off for now. We're heading to Nigeria next. Marne just told me that she'll be sending green beans my way in the next couple of days. I wonder if they use green beans in any Nigerian recipes. I'll start looking.