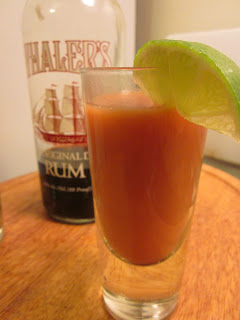 The original Barbuda Sands cocktail was invented at a seaside restaurant in Antigua in 2002 and named for the unique pink sands of Barbuda. It included two different kinds of rum and two kinds of juice. I used one kind of rum, since that's all we had, and three different juices. I added the coconut milk since the original recipe called for "coconut rum." No idea what that is.

This was delicious. Cheers!