By Camilla M. Mann January 01, 2012
Okay, I know what you're thinking, a friend even said it outloud: chocolate and barley do not belong together in a sentence, much less in a dish. Au contraire. My chocolate-barley brownie at the base of a coffee-blast baked alaska was a hit last night. 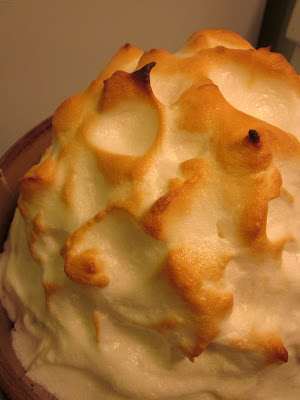 If you ask my eight-year-old what his favorite dessert is, he will answer in less than one second with a resounding - Baked Alaska! He even requested it for his birthday cake this year, twice; but timing didn't work out. So, I figured that it would be the perfect midnight dessert for New Year's Eve.
When I received bags of different kinds of flour for Christmas, I saw a recipe for a chocolate-barley brownie on the back of the barley flour. Intrigued, I used that as the base for my baked alaska, spiced with some ground cardamom. Yum. 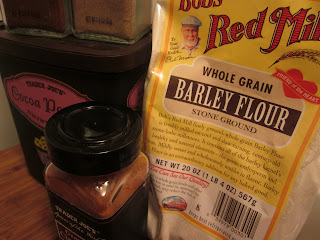 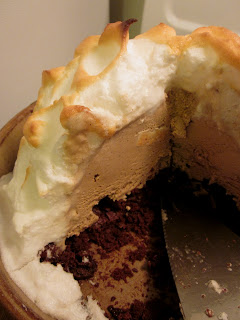 Mix all the ingredients together  and bake in a buttered pan for 30-35 minutes until the cake is set.
For the icea cream, I usually do this the night before: line a bowl with plastic wrap, press slightly softened ice cream into the bowl, cover it tightly with more plastic wrap, and refreeze. For this cake I used the coffee blast ice cream from Trader Joe's.
Once you're all set to assemble, separate 8 eggs, placing the whites in a large stainless steel bowl. Add 1/8 t cream of tartar, 1/8 t salt, and 2 T organic granulated sugar.
Beat egg whites with cream of tartar, salt and sugar until stiff peaks form. Line a baking sheet with parchment or heavy brown paper. Place cake in center. Turn molded ice cream out onto cake. Quickly and prettily spread meringue over cake - make sure to have lots of little peaks because that it what browns - all the way to paper to seal. Return to freezer.

Preheat oven to 425 degrees F. Bake the Alaska on the lowest shelf, 8 to 10 minutes, or until meringue is lightly browned. Serve immediately!