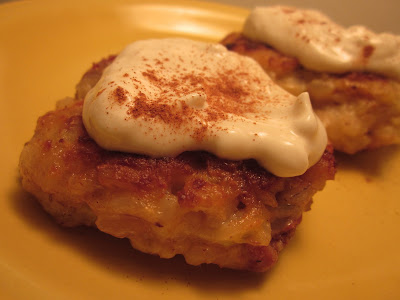 Contrary to popular belief among my friends, I do not just wiggle my nose and have good things come out of my kitchen. It takes work and a lot of practice. But here's the thing: the more you cook, the easier it gets. You begin to see similarities in textures and, thus, can adapt and revamp things into other things. Kinda like a nose-wiggle, I suppose.

So, this morning, I looked at the pot of leftover Sher Berinj (Afghani Rice Pudding) in the fridge and thought "I can make that into breakfast!" Remember my timbale di risotto, little drums made with leftover asparagus-fennel-leek risotto? Same idea.

I placed the cold pudding in a bowl, added one beaten egg, and formed them into palm-sized patties. Then I cooked them in a large flat-bottomed pan - with a pat of butter - until they were crisp and nicely browned. I topped them with a lightly sweetened organic sour cream (organic brown sugar and a splash of pure vanilla extract) and a sprinkling of cinnamon.