By Camilla M. Mann January 02, 2012
I had planned to make several traditional new year's dishes, including an Italian dish of sausage and lentils and an American dish with black-eyed peas with collard greens. Feasting for fortune was the theme I had in mind.

Traditionally, black-eyed peas represent coins while the collard greens with which they are typically served stand in for paper currency. I am certain that lentils and sliced sausages also stand in for coins on Italian tables. But after a late evening stop at three different grocery stores that were completely sold out of the peas - even in a can! yes, I did look - I said, "forget it" and decided to combine my ideas and improvise a dish. Still wanting the look of the black-eyed peas, I soaked and cooked canellini (white beans) and steamed black Forbidden rice. 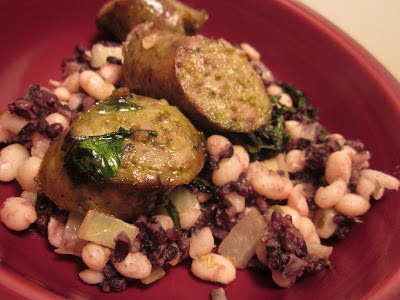 I soaked the white beans overnight, then changed the water and simmered them until soft - about 90 minutes - with two fresh bay leaves. In the meantime, I cooked the black Forbidden rice in chicken stock. Set both aside.

In a large flat bottom pan I browned shallots and fennel, seasoning with fresh oregano and thyme. Once those are softened, I stirred in the beans, rice, and a cup of chicken stock and cooked that till the stock was absorbed.

In another pan I caramelized more shallots and spinach and lightly browned slices of chicken-basil sausage until warmed through. Sprinkle with sea salt and freshly ground pepper. Drizzle with a nice olive oil.

I served this with some new year's mimosas and many toasts of Felice Anno Nuovo!  and Buona Fortuna!