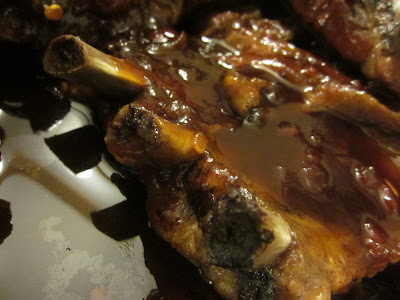 "No meat, no meal." At least that's what the birthday boy asserts on a daily basis. Fine, Brian. I'll make meat the centerpiece of your birthday lunch. 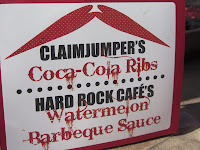 I found a recipe for ribs cooked in Coca-Cola and used the copycat version of the barbeque sauce recipe printed in More of America's Most Wanted Recipes by Ron Douglas as a jumping off point. Watermelon in barbeque sauce, now why didn't I think of that? Delicious.
For the ribs...I sliced the racks into pieces that could fit in the bottom of my pans. I browned smashed garlic in a splash of olive oil then quickly seared the ribs to seal in the juices.
I poured in the Coca-Cola and beer (I used Blue Moon's Pumpkin Ale because that's what I had in my fridge), brought it to a boil, covered it, and reduced to a simmer. Let that simmer for 2 hours. The meat will be so tender that it's almost falling off the bone.
Make the sauce while the ribs are cooking. For the sauce...let's just say that I took liberties with the Hard Rock Cafe watermelon sauce. A lot of liberties. 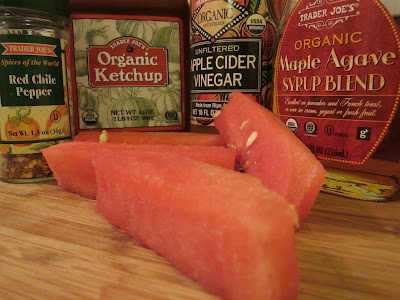 ﻿seedless watermelon, cubed
2 shallots, minced
1 C maple-agave syrup (the original called for dark corn syrup)
1/4 C organic ketchup
1/2 C unfiltered apple cider vinegar (the original called for white vinegar)
1/2 t red pepper flakes
freshly ground smoked sea salt and flower pepper
(I skipped 'liquid smoke' because I don't have a clue what that is or where to get it)
Cook the watermelon and shallots in a splash of olive oil till the watermelon begins soften. Smash with a potato masher. Add the rest of the ingredients and cook until the sauce thickens.
Slather the ribs with the sauce and let sit overnight in the fridge. Before serving, brush the sauce all over the ribs - again - and bake, covered in foil, in a 300 degree oven till completely warmed.
Don't forget lots of napkins!