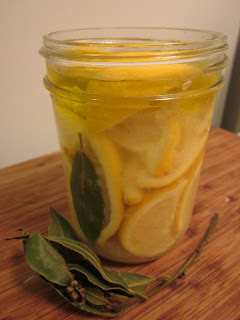 When life gives you lemons...get in the kitchen!
As we were leaving Jenn and Mike's yesterday, after the birthday party, she told me to take some of the lemons from her mother-in-law's tree; she had a huge box sitting on her porch. So, I took about a dozen and dreamt about what I wanted to do with them. Yes, I dream about cooking. That can't be a surprise.
I decided to make two family favorites, then I'll branch out. So, first up this morning: preserved lemons.
This recipe is so easy and so delicious. You just need to be a little bit patient because they need to be in the jar for at least three weeks.
You only need five ingredients: lemons, salt, bay leaves, water, and olive oil. 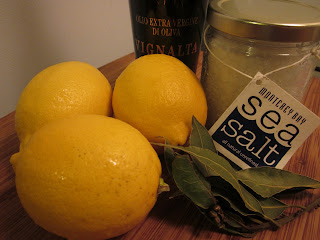 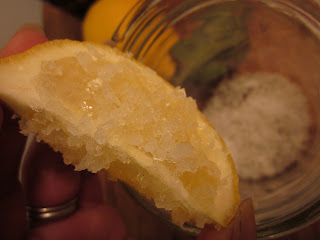 Wash the lemons well. Cut the lemons into sixths (half and then each half into thirds). Press the cut sides so that they are generously coated with salt. Put a couple of tablespoons of salt in the bottom of a jar and pack the lemons in layers, sprinkling a thin layer of salt between each layer of lemons. Push the lemons down firmly to pack them tightly and to help express some of their juice. Add a bay leaf, or two. Cover them with water. Finish with a layer of olive oil. Cover the jar tightly. Leave at room temperature, in the dark, for at least three weeks.