By Camilla M. Mann October 18, 2011
Because my apple hand pies were such a hit, and because a friend recently posted about pumpkin pies at McDonald's (not that I would go there to get them!), I decided to give hand pies a shot with the pumpkin puree I made this afternoon and the pears I got from my parents. 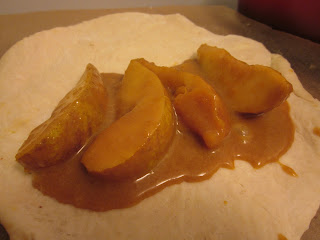 2 sticks frozen butter, cut into little cubes
1/4 C sour cream
1/2 C ice-cold water
Place flour, salt and butter in a large mixing bowl; with a pasty cutter, cut butter into the flour and salt mixture until it resembles coarse sand. In another bowl, whisk together sour cream, and water. Slowly drizzle in the liquid mixture to the flour and butter, blending just until a rough ball forms. Pour out onto a lightly floured board and knead until just combined. Pat dough into a ball, wrap in plastic and refrigerate for one hour.

Remove dough from refrigerator and cut in half. Roll each portion of dough to a thickness of about 1/8 of an inch. Using a round biscuit cutter, cut into circles, about 6  inches in diameter (the rim of a small bowl works well if you don't have a biscuit cutter that size). Place on a baking sheet, lined with parchment. Scraps can be re-rolled and cut again. Place baking sheet in the refrigerator and repeat with the other ball of dough. Refrigerate for 30 minutes. 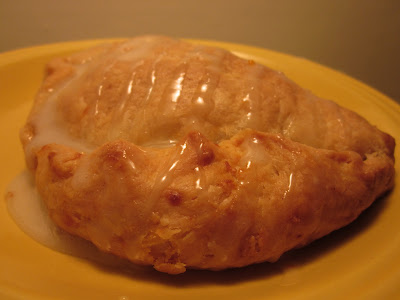 Preheat oven to 350 degrees.
Remove dough from refrigerator. Place about pumpkin filling on one half of each round and lay sliced pears on top. Lightly brush edges with water, fold dough in half to make a crescent, and fold edges together. Place back in the refrigerator for another 30 minutes. Remove from fridge. Sprinkle with sugar. Bake for 30-35 minutes or until golden brown.
The glaze... 2 C powdered sugar and 3 T milk.