By Camilla M. Mann October 23, 2011
Tonight I decided to make a risotto - just for the leftovers. My husband accused me of being just like my 9-year-old who wanted to order pizza in a box - just for the box. Thankfully I found out that the box was his actual goal, and not the pizza, so I just asked a pizza place for a clean box and skipped the entire pizza delivery experience. It's not that I didn't want to eat the risotto, I just have a recipe that uses leftover risotto. Stay tuned for that tomorrow.

The secret to risotto, as Maria told me, is stirring: usa il cucchiao...sempre. Use your spoon...always; keep stirring. 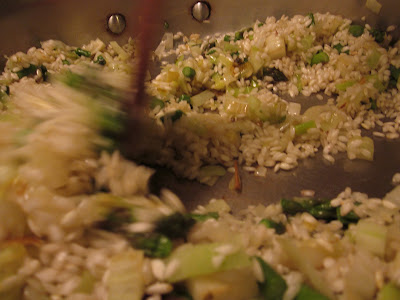 Maria was the cook for the Nuzzo family who was ordered to teach me all her recipes. Then she was fired and I was tasked with cooking for the family six days a week. Thankfully she didn't blame me for the impossible situation and we stayed close throughout the year that I was there. And sometimes when I cook, I head her instructions in my head. 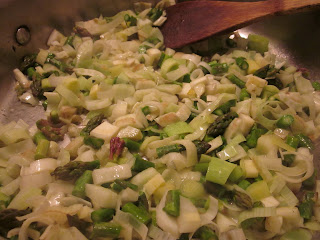 Make risotto with whatever you have on hand. Tonight I used sliced fennel, sliced leeks, and chopped asparagus. Stir in the arborio rice - one handful per person you're serving and un'altro per la pentola (an extra for the pot). Maria's voice again. Add one ladle of simmering broth* at a time, stirring, stirring, and stirring some more till the liquid is absorbed. Repeat until the rice is soft. Let stand for 5 minutes. Season with sea salt to taste. Stir in marscarpone cheese. Serve with shreds or shavings of parmesan cheese. 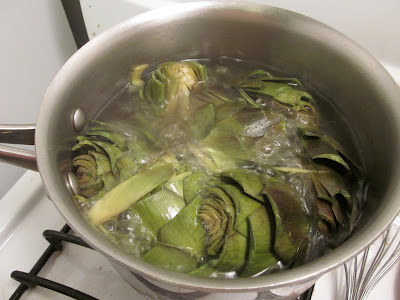 *here's a trick I love: instead of using straight broth, use the cooking liquid from whatever else you're cooking that night. For instance, tonight I was also cooking artichokes. So when they were done cooking, I used the liquid for additional broth in the risotto. Because the artichokes were submerged in the water, some of the vitamins were leached out in the cooking process, but you're now getting those back by using them in your other dishes.