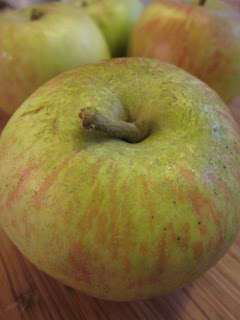 Nothing says 'autumn' to me as much as picking apples in an orchard. After spending the morning at Clearview Orchards in Watsonville with some friends, I let the boys pick a few things they wanted me to make with their loot. Jake wanted apple-turnovers. Looking for a turnover recipe, I came across recipes for pocket pies and hand pies.


Have you had hand pies before? They’re adorable. There’s something about the idea of a small pocket of pie crust filled with goodies, all bundled together in an easy-to-hold portable package that is incredibly appealing to me. Hand pies are basically in the same family as all self-contained, individual-sized stuffed pastries.  They’re closely related to empanadas, samosas, and turnovers; I figured these would fit Jake's request. I even made them with white flour.
2 1/2 C flour
1/2 t smoke sea salt
2 sticks frozen butter, cut into little cubes
1/4 C sour cream
1/2 C ice-cold water 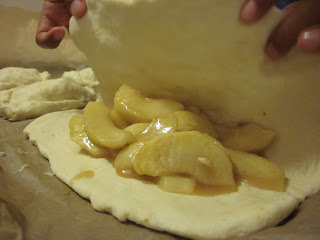 The best part: Dylan was excited and able to help me make them.
Place flour, salt and butter in a large mixing bowl; with a pasty cutter, cut butter into the flour and salt mixture until it resembles coarse sand. In another bowl, whisk together sour cream, water and lemon juice. Slowly drizzle in the liquid mixture to the flour and butter, blending just until a rough ball forms. Pour out onto a lightly floured board and knead until just combined. Pat dough into a ball, wrap in plastic and refrigerate for one hour.

Meanwhile make apple filling. Melt butter over medium heat in a large skillet. Add apples and sauté for 3 minutes or until beginning to soften slightly. Add cinnamon and raw sugar. Cook for 2 minutes more, or until raw sugar melts. Remove from heat and cool completely.


Remove dough from refrigerator and cut in half. Roll each portion of dough to a thickness of about 1/8 of an inch. Using a round biscuit cutter, cut into circles, about 4 1/2 inches in diameter (the rim of a small bowl works well if you don't have a biscuit cutter that size). Place on a baking sheet, lined with parchment. Scraps can be re-rolled and cut again. Place baking sheet in the refrigerator and repeat with the other ball of dough. Refrigerate for 30 minutes. 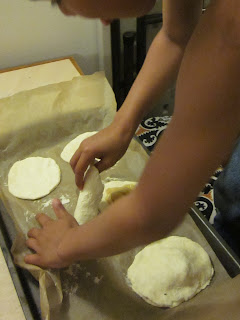 Preheat oven to 350 degrees.
Remove dough from refrigerator. Place about 1 tablespoon of apple filling on each round. Lightly brush edges with water, place another round on top, and fold edges together. Place back in the refrigerator for another 30 minutes. Remove from fridge. Sprinkle with sugar. Bake for 15-20 minutes or until golden brown.
The last thing Jake wanted was a glaze that makes your teeth ache. I made one with 2 C powdered sugar and 3 T water.
Mission accomplished. 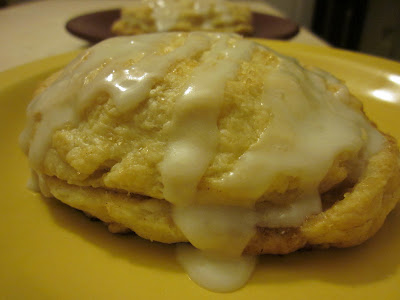