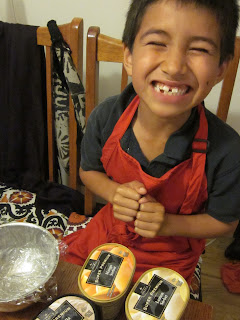 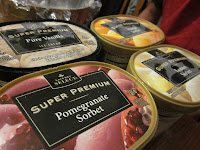 I made the mistake of asking: what kind of cake should we make for Nonna's birthday? I should have stuck with my cardinal rule of giving the boys two choices, both of which did not require me to go to the store. Ugh.


In answer to the question, Dylan, excitedly, exclaims, "let's make an ice cream cake!" I tried to disuade him once, twice, and thrice. But he was adamant, so we decided on a Baked Alaska, and I headed to the store.
A Baked Alaska is a dessert made with a sponge cake base, a dome of ice cream, and a layer of meringue that is baked just long enough to set the meringue without melting the ice cream. 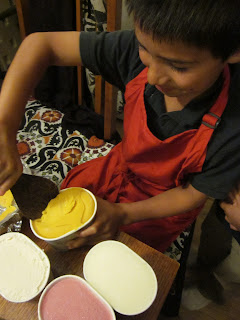 I liked a recipe that called for multiple colors of ice cream, creating a mosaic in the ice cream dome; Dylan liked that he could pick multiple flavors. He chose pomegranate sorbet, mango sorbet, lemon sorbet, and vanilla, saying "Nonna really likes sorbets." Okay.
Into a plastic wrap-lined bowl, Dylan scooped the different flavors. Pink. Orange. White. Cream. Pink. Orange. White. Cream. I'm pretty sure he had a pattern; he's not big on assymetry. I packed it flat, wrapped the whole bowl in plastic wrap and placed it in the freezer to freeze completely. 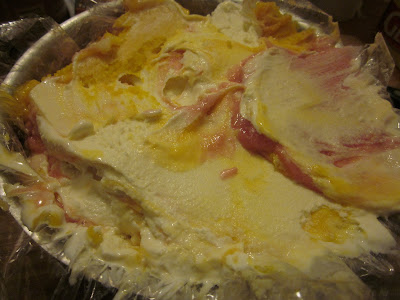