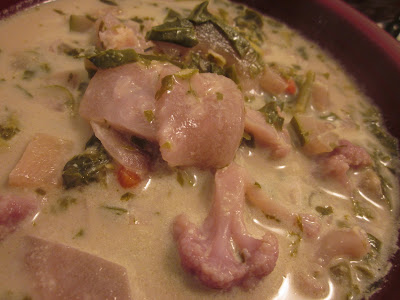 Make the curry base: Grind coriander, cumin, peppercorns, and salt with a mortar and pestle, or with the bottom of a heavy skillet. Add remaining ingredients, and grind until a paste forms. (Curry paste can be refrigerated for up to 2 weeks or frozen for up to 3 months.)

Make the soup: Saute leeks, onions, and fennel slices in a splash of olive oil until softened and beginning to caramelize in a heavy stockpot. Add coconut milk and chicken broth and bring to a boil. Reduce heat, stir in curry mixture, simmer for 5 minutes. Add squashes, peppers, and cauliflower and cook until slightly tender.