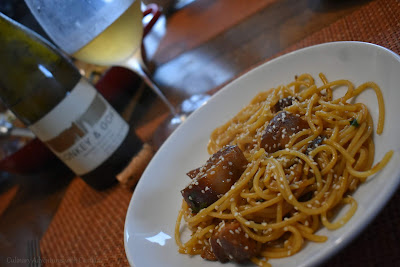 Surprisingly pork belly is one of those polarizing ingredients. Even for meat eaters, I've found people either love it or hate it. Or, if you're like me, you want to learn to cook it so that you love it. But I have had fewer recipe successes than I would like with pork belly. This was one of those winners. Woohoo!

For some reason, I usually lean towards Asian flavors with pork belly. Hui Guo Rou (Twice-Cooked Pork Belly) and Kimchi Soondubu Jjigae (Kimchi-Tofu Stew) are prime examples of that. And this was no exception. I decided to caramelize the pork belly in a soy-fish sauce broth and toss it with pasta. And I paired it with a bottle from Donkey & Goat Winery, their Skins and Stems 2018 Chardonnay. 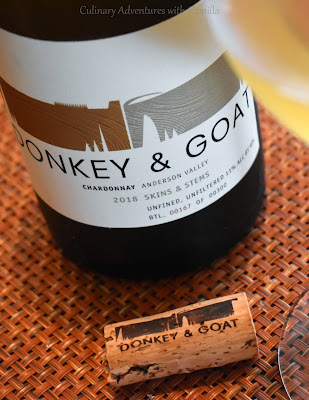 The Skins and Stems 2018 Chardonnay from Donkey & Goat was one of the reasons that I finally took the plunge and signed up to be part of the wine club. I've loved every wine I've ever tried from them, but when I realized that I wouldn't be able to get my hands on this or the 2018 Still Kraisey Merlot unless I joined. Sign me up, please!!


This wine is quinessentially esoteric. After all these years, I still chuckle when I see 'esoteric' as a category on their wine offerings. It's a pleasing blend of musty and tangy with a scent that reminds me of wet granite. If you've ever hiked the Vernal Falls Trail in Yosemite National Park, it's that smell that wafts from the walls and steps as you make your way to the top of the falls. 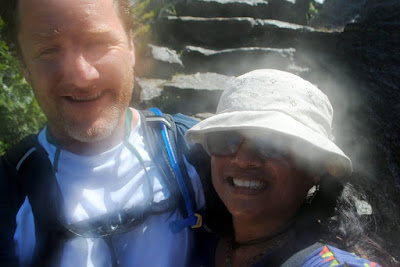 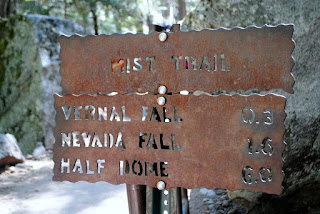 And like the mist on Mist Trail, this wine is refreshing and bright. I couldn't wait to pair it with something fatty. I decided to tackle pork belly!! Again... 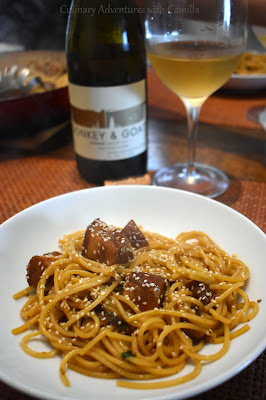 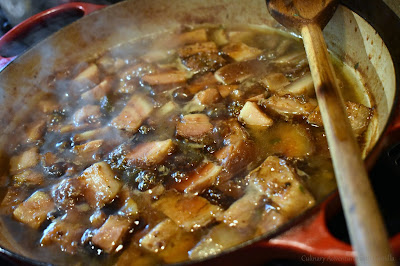 Procedure
In a heavy bottomed pan or cast iron skillet (I used my Le Creuset Braiser), add the brown sugar and melt over medium heat. Don’t stir it, just let the sugar melt and turn to caramel, approximately 5 minutes.

Add in the pork belly cubes. Stir and cook until the fat begins to render and the meaty parts turn lightly golden brown, approximately 7 or 8 minutes. Pour in the the water, fish sauce, soy sauce, and rice wine vinegar. Stir in the sliced shallots.

Bring to a boil and then reduce the heat until the liquid is at a simmer. Simmer, stirring occasionally, until the pork belly is tender and the sauce reduces greatly, approximately 25 to 30 minutes. In the meantime, cook your pasta and set aside.

Once the pork belly is ready, season to taste with cracked black pepper. Dump the cooked pasta directly into the pan and toss to coat. 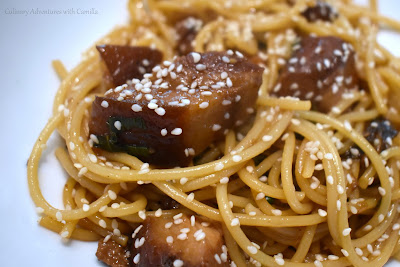