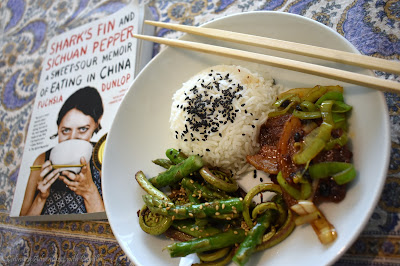 Deb from Kahakai Kitchen is our Cook the Books hostess for this round; she chose Shark's Fin and Sichuan Pepper: A Sweet-Sour Memoir of Eating in China by Fuchsia Dunlop* as our April-May Cook the Books selection. You can read her invitation: here. If you want to join us, posts aren't due till the end of May. You have plenty of time.

On the Page
I have had this book for several weeks, but, for some reason, I was reluctant to pick it up from my nightstand. I don't know why. Perhaps the ocean conservationist in me was cringing at the thought of shark finning. But I tucked it into my backpack when I left to chaperone my son's robotics team as they competed out of town. And, after dinner, when all the kids were in their rooms, I settled into my bed with a glass of wine and this book.


Fuchsia Dunlop is a British cook and writer who specializes in Chinese cuisine. She was the first westerner to train as a chef at the Sichuan Institute of Higher Cuisine in Chengdu, Sichuan, China. This memoir was immediately captivating, lagged about towards the latter parts, but wrapped up nicely. I will definitely seek out more of her books and thank you, Deb, for the introduction to this author. A few things I want to share that I enjoyed...

She writes about food history...
"Dan Dan noodles are the archetypal Chengdu street snack. Their name comes from the bamboo shoulderpole that street vendores traditionally use to transport their wares: the verb 'dan' means to carry on a shoulderpole. Elderly residents of the city still remember the days when the cries of the noodle sellers - Dan dan mian! Dan dan mian!  - rang out in all the old lanes. The vendors would lay down their shoulderpoles wherever they found custom, and unpack their stoves, cooking pots, serving bowls, chopsticks and jars of seasonings. ...Passerbys would slurp them in the street. The noodles were served in tiny bowls, a liang at a time, just enough to take the edge off your hunger, and so cheap that almost anyone could afford them" (pg. 36).

She shares descriptions of meals she ate...
"This glittering kaleidoscope of delights is just the start of the feast, a tasting menu that encompasses twenty-five more dishes. Some are served on grand platters, like the rice-jelly with fresh abalone in a rumbustious chili-bean sauce, and the tangle of dried squid with opened out miniature peapods. Others, like the soymilk custard topped with glossy morsels of rabbit, come in tiny individual dishes" (pg. 143).

"'Drink them immediately,' he told me. So I put my lips to the rim of each glass in turn, and drank the traffic-light cocktails, the blood swirling scarlet in the first, the second bitter and invigorating. The strong liquor scorched my throat and brought tears to my eyes, while the sight of the raw swirling blood made me feel a little queasy" (pg. 257).

And she reflects on how her time in China changed her...
"Why is it, I wondered, that I would think nothing of eating this in an insect restaurant in China, but I am hesitatnt to try it here? Even my friends by now expect me to eat all kinds of weird and revolting things in China. My tales of eating insects and snakes seem hardly to perturb them. Dogs might strike them as a bit more unsavoury, but because it's in China, it's just a part of my exotic travelogue, it adds a bit of colour to my narrative. I realised, however, that eating a caterpillar from my parents' garden would be a real transgression" (pg. 311). 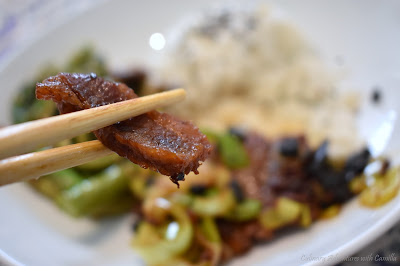 Sprinkled throughout the narrative, Dunlop includes recipes and the one that struck me immediately was her Twice-Cooked Pork (pg.59). 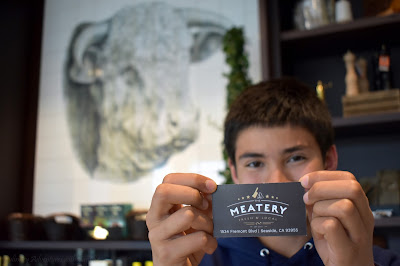 Two reasons for that: first, we have a newly opened artisan butcher in town and I wanted to support them. You can read the article I wrote for the Winter issue of Edible Monterey Bay about The Meatery: here. 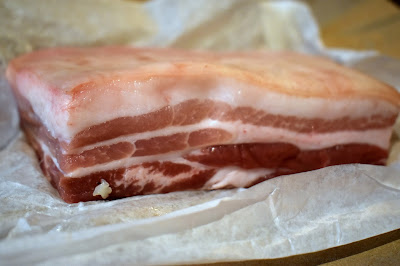 And second, I have only attempted to cook pork belly once before and it was a disaster. I wanted to redeem myself. So I headed to The Meatery and picked up almost a pound of pork belly and gave it a go. 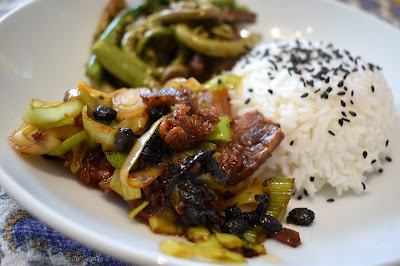 The name hui guo rou literally means ‘back-in-the-pot’ meat, because the pork belly is first boiled, then stir-fried. Dunlop tries from her first Sichuanese shi fu (cooking master), Feng Rui. Note that you need to let the pork belly cool completely before slicing. I did the first part one evening and the second part - and serving - on the second evening. 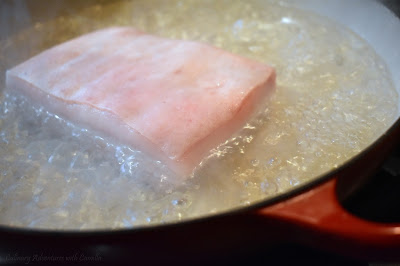 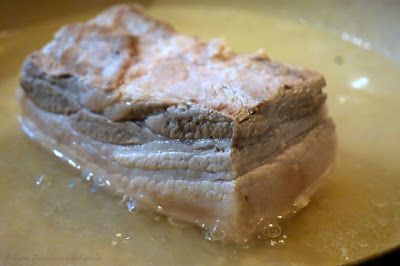 Procedure
Place the pork in a large pan. Pour in enough water to cover the pork belly over half way up. Bring the liquid to a boil and simmer for 20 minutes. Turn the pork belly over and continue simmering for another 10 minutes. Pierce the flesh and make sure that the juices run clear. Let cool, then refrigerate for several hours or overnight.

When the pork belly is completely cold, slice it thinly. Each slice should have a strip of skin along the top. Trim and slice the leeks into thin, diagonal strips.

Add the oil to a seasoned wok or other heavy pan and heat till sputtering. Place the pork slices in a single layer and reduce the heat to medium 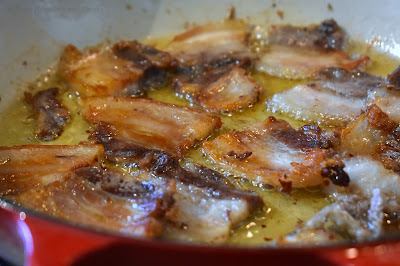 Cook until some of their fat has melted out and they are browned nicely. Push the pork to the side of the pan and stir in the chili bean paste and the sweet bean paste. Cook until the oil in the pan is red and fragrant. Stir in the black beans and cook for 1 to 2 minutes. Pour in the soy sauce and sprinkle in the sugar. Stir to combine well then add in the sliced leeks. Stir-fry until the leeks are softened. 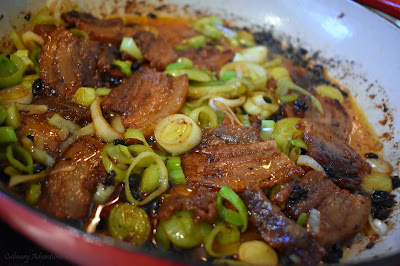 Season to taste with salt, if needed. I find I rarely add additional salt to dishes that include soy sauce. Serve immediately with steamed rice. I also offered Sautéed Sesame-Soy Fiddlehead Ferns and Asparagus. 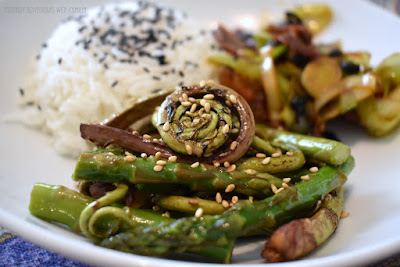 This attempt at cooking pork belly was definitely a hit with my family. Not a single piece was left. Success.


I am also linking this up to Foodie Reads.
Here's what everyone else read in April 2018: here.