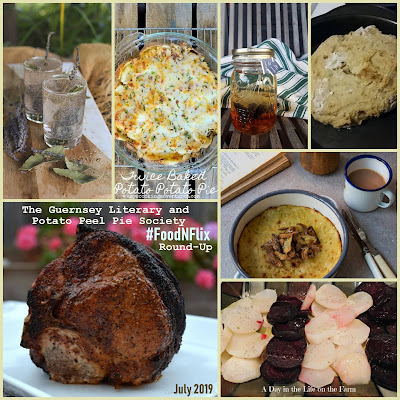 This month, I hosted Food'N'Flix, the movie-watching, food-making group rallied by Heather of All Roads Lead to the Kitchen. So for July's Food'N'Flix, I chose The Guernsey Literary and Potato Peel Pie Society.*

This was a movie that I started on the plane to Denmark, over the holidays, but I dozed off during the twelve hour flight and forgot all about the movie. Something jogged my memory recently and I decided to watch it. And I found it so charming, I opted to host it for this month's event...and suggested it for one of my book groups this month also.

It's available to stream on Netflix, if you're interested! I have included a link to the book at the bottom of this post because I still can't decide which I liked better. And that's a rarity for me.

The other Food'N'Flixers seemed to enjoy the movie as well, though Wendy did suggest that you watch first, then read. I would agree with that. Here's what the group was inspired to make and post.

Kimberly, from Coffee and Casseroles, shared Potato Bread. She shares, "My inspiration was both the main food of potatoes, which is about all the people in the community have left to eat after the German soldiers pretty much take all the supplies; and a scene where one of the characters asks for the last slice of bread to help prove a point." 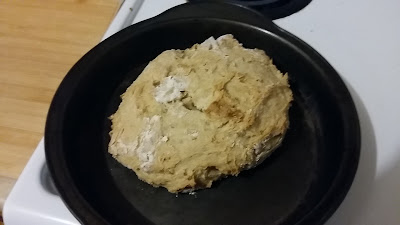 Wendy, from A Day in the Life on the Farm, made Roasted Beets and Turnips. Wendy writes, "I don't recall turnips being mentioned at all in the movie but there were scenes about food and the lack of food available to the residents during the occupation.  I'm sure they were all sick and tired of turnips but I happen to love them and have decided to share an easy peasy recipe for you...." 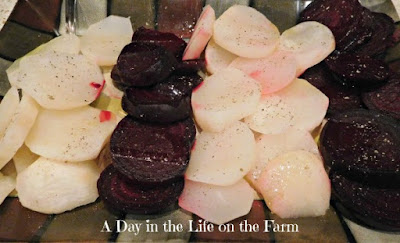 Heather, from All Roads Lead to the Kitchen and this group's founder, turned to the occupation of her favorite member of the Guernsey Literary and Potato Peel Pie Society, Miss Isola Pribby, and posted Lavender, Bay & Anise Infused Gin. "Isola arrives to meetings, homemade gin-filled bottles in tote, and lives in a glorious little cottage, ceiling strung with drying herbs; her very own apothecary. A woman after my own heart. Plus, infusing gin would not require me to add any heat to the fire."

And in the DIY spirit, Heather shares, "As far as flavoring goes, I chose two things that I had actually dried myself - lavender and bay. And as a nod to one of the flavors Isola mentioned when Juliet asked about her choice of flavors, I added some anise seed to the mix." 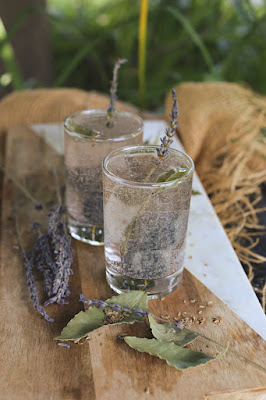 Debra of Eliot's Eats was also inspired by Isola's gin-making. Debra whipped up some Earl Grey Infused Gin. She posts, "I loved her quirky wardrobe and her profession: gin maker! She supplied the literary society (and the island) with her own unique spin on infused gins.  So, instead of a proper British scone with clotted cream, I decided to infuse some good London gin with Earl Grey tea." 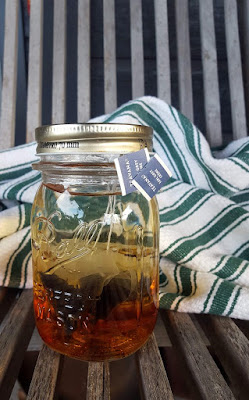 Amy, from Amy's Cooking Adventures, made Twice Baked Potato Potato Pie and shared that she liked the movie, but adored the book! She writes, "I decided that I definitely wanted to make potato peel pie, but not a 1940’s potato peel pie.  I decided to load up my pie with all the goodness of twice baked potatoes, with the tater skins as the pie crust, of course!" Yum. 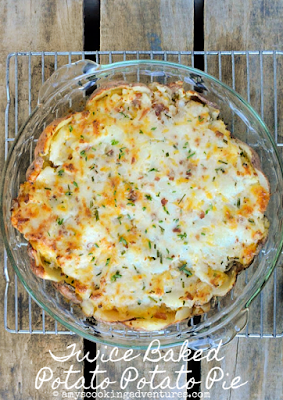 Moya of Food and Tools, a Food'n'Flix newcomer, shared Irish Boxty and a Potato Peel Pie. She explains about "a traditional Irish potato dish called Boxty. It is a mixture of cooked mashed potatoes and raw grated potatoes with a little flour, butter and seasoning mixed in. As with most traditional recipes,  Irish families have their own variations on how they prepare and cook boxty, be it on a griddle or in a pan… we even have  a rhyme for our boxty." 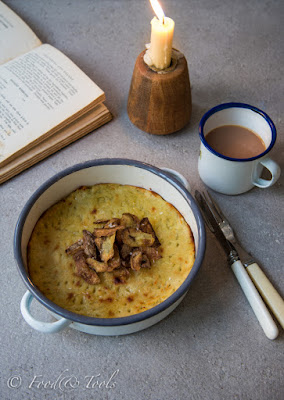 So, potatoes and gin were the most popular inspirations. I fell right in line when I made a Gin-Washed Pork Roast. "The movie opens with Eben Ramsey, played by Tom Courtenay, saying, 'Sweetest pork I've ever tasted, Dawsey!' And, in a flashback, you see Dawsey pulling that roast out of the oven." While I didn't get a rib roast that had those long ribs that I wanted, this was a tasty piece of pig. 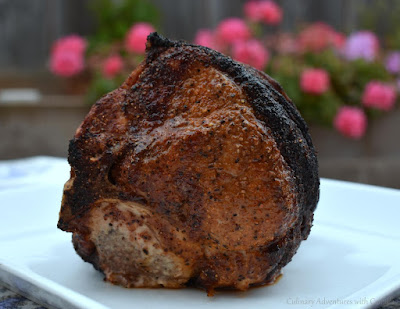 And that's a wrap for the July 2019 Food'n'Flix event. Next month we'll be watching Star Wars with host Simply Inspired Meals. I'm not sure which movie she has in mind - or if we get to choose - but I know my trio will be super excited to watch any or all of them again.