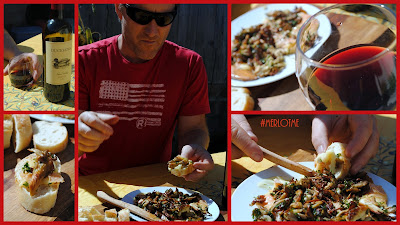 #winePW collides with #MerlotMe
Wine Pairing Weekend - #winePW - happens on the second Saturday of the month. And this month - October 2015 - foodwineclick is hosting. Jeff invited us to jump on the #MerlotMe bandwagon with him. Click to read his invitation.. 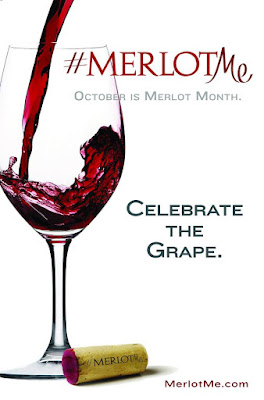 The MerlotMe website encourages wine lovers to "celebrate the greatness of Merlot throughout the month of October." So, we are. In addition, all of the #winePW bloggers were offered three bottles of Merlot to try, taste, and pair for this event.

Complimentary wine? You bet. I'm in.

About the title of my post: Fungi, Fun Guy, & Two Napa Valley Merlots. I decided to pair the wines with earthier, meaty flavors and settled on mushrooms because I didn't have any truffles. That's the 'fungi' part. The other 'fun guy', well, that's my Love. Our mini boys are off on a Fall Break adventure with my parents. So, Jake and I were able to head outside for a backyard picnic this past weekend.

And, though I received three bottles, I opted to do a lateral, localized tasting and pair only the two Merlots from Napa Valley for this post.

The bottle from L'Ecole No. 41 was immediately tagged for a special vegan dinner I'm preparing for some friends next month. So, you'll have to wait till November for those tasting notes. Besides, being a Washington-based winery, L'Ecole didn't quite fit into my lateral and localized pairing. So, it'll get its own post soon.

Merlot
A bit more about this varietal before I get into the food and wine pairings. Merlot is a dark almost blue-black colored grape. It is used both as a blending grape - fairly common as an element in Meritage blends - and as a single varietal. It's thought that the name merlot might come from the French word for blackbird, merle.

I'll be honest: Merlot is not a wine I typically buy. I think of them as fruity and simple. So, I'm not a fan. But I was excited to get a curated shipment from the participating wineries and dig in.

All of the MerlotMe participating wineries can be seen here. I received complimentary bottles from Duckhorn Vineyards, Twomey, and L'Ecole No. 41.* And I'll talk more as I get into the tasting notes and food pairings, but I was absolutely thrilled to be proven wrong with my "fruity and simple" notion. In fact, I found that Merlot really boasts the same flavors as a Cabernet Sauvignon, but with softer tannins. Jake and I really enjoyed the wines.

The Rest of the #winePW #MerlotMe Offerings
See what our bloggers have cooked up!

With the Duckhorn
I've had Duckhorn before...but their Cabernet Sauvignon, not their Merlot. This was an aromatic Merlot with bright red fruit layers underscored with more earthy notes of fennel, tobacco, spice, and herbs. Deeply nuanced, this velvety wine was both sophisticated and surprising. Remember, I thought Merlots would be fruity and simple. The Duckhorn was anything but. And it paired beautifully with my crisped mushrooms on warmed Le Welsche. Click on the recipe title, below, to go to the original recipe post. 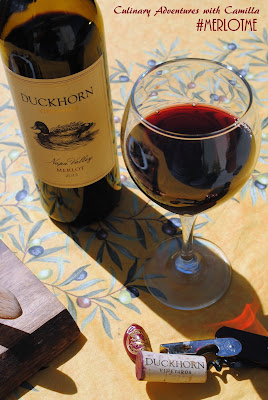 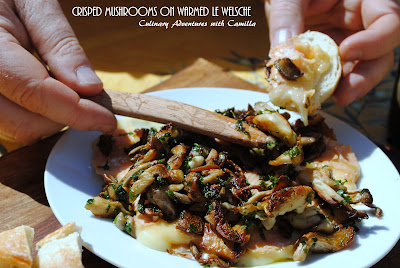 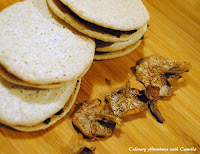 Also out of Napa Valley, Twomey's is a ninety-six percent Merlot blended with four percent Cabernet France. Velvety smooth, this wine was lusciously full-bodied. It boasted a bright garnet hue and a complex nose of cherry, chocolate, thyme, and lavender. My first thought was: dessert! I thought about sharing an elegant mushroom-scented dessert - think macarons made with dried candy cap mushrooms - that you would serve with wine instead of coffee. But I had to shelve my macaron posting plans this week when my first attempt at macarons flopped.

Instead I am sharing something savory to go alongside roasted leg of lamb and this wine. Click on the recipe title, below the photo, to go to the original recipe post. 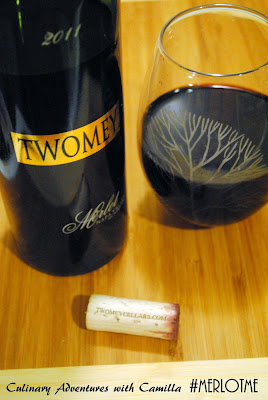 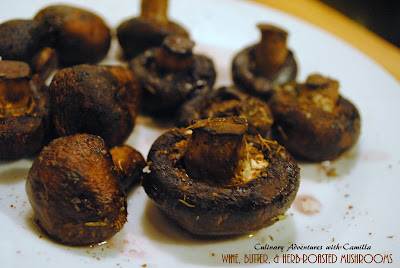 Follow the #winePW conversation on Twitter throughout the weekend and beyond. If you're reading this early enough, you can join us for a live Twitter chat on our theme on Saturday, October 10, from 11 a.m. to noon Eastern Time.

*Cheers and Thank You!
Grateful to the vineyards who provided complimentary wine for tasting and pairing for this month's #winePW event, in honor of #MerlotMe. Thank you to Jeff, of foodwineclick, for arranging it. And thank you, especially, to Duckhorn Vineyards, Twomey, and L'Ecole No. 41. I have received no additional compensation for this post. All statements are 100% mine and 100% accurate. 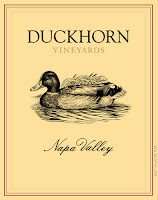 And that's a Wrap...
...on our October #winePW event. We loved the dual pairing of Napa Valley Merlots and mushrooms! I'll pin this recipe and other posts on my #winePW pinterest board. If you try this pairing - or just the wine - I would love to hear what you think. Comment below or tweet to me at @Culinary_Cam. 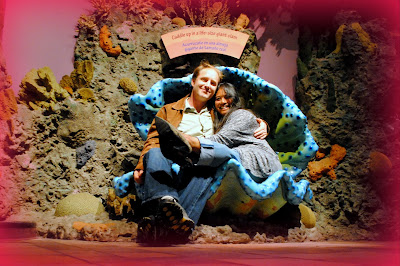 Cheers from me and my fun guy!